Tour a Classical New England Home with a Contemporary Landscape 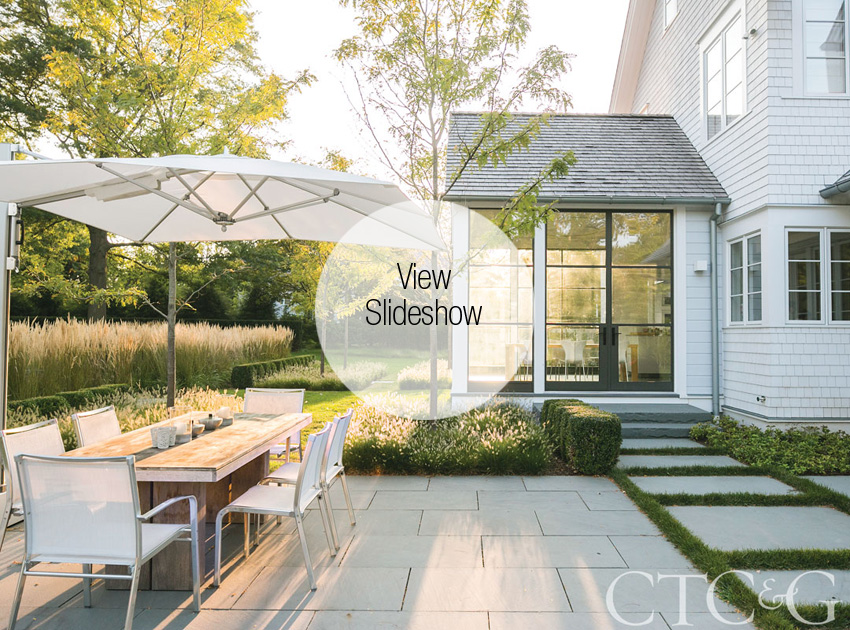 Landscape designers Kathryn Herman (principal at Doyle Herman Design Associates) and Justin Quinn (DHDA studio director) are longtime admirers of renowned 20th-century Dutch landscape architect Mien Rhys, whose style has often been distilled down to three words: clear, direct and barren. It was her approach—save the barren part—that the duo hoped to emulate on a recent New Canaan project. “Mien’s gardens were all about form and organization, and we saw this property as having lots of structure with a limited palette,” says Herman.

The owners, serendipitously a Dutch couple with strong modern leanings, heartily concurred. “Dutch design and aesthetics are all about clean lines—lots of basic whites on the interior and green spaces outside,” says the husband, who along with his wife purchased the 4.7-acre property, which they opted to subdivide after scrapping the house on a parcel they kept for themselves. According to the husband, with the exception of an occasional holiday gathering, the house went unused for almost two decades and, coupled with a burst pipe that caused considerable water damage, it was largely unlivable.

Thoughts for replacing the structure with more modern architecture were overruled by what the husband referred to as the couple’s Dutch pragmatism. “We figured we might need to sell one day and concluded a somewhat classical New England home made more sense,” he says about the building with shingles and shiplap siding that took its place. But the couple stood firm on plans for a contemporary landscape, and proper placement of their new home was a critical first step.

“Part of the design included a sunroom that bumps out. When we arrived on the job, they wanted the house angled so it would have a view of a large oak tree,” says Herman, who convinced the couple the angle wouldn’t allow for enough lawn. “So we torqued it a bit and agreed to make the oak the focal point of the pool instead.”

Then they tackled the front entry where stacked stone walls flanking an oil and stone driveway signal the arrival court. A row of sheared hornbeams and boxwood hedges subdue the sets of doors located to either side of the main entrance, the latter painted bright red to cue visitors.

The rear of the property is intentionally carved into a series of outdoor rooms with various functions including a sunken and hedged pool area. It is less visible from the main house, so the owners won’t have the pool, which is covered half the year, in their viewscape. Instead they see a boxwood hedge backed by a line of lindens and substantial groupings of feather reed and fountain grasses. “The grasses are such a nice juxtaposition to the linear hedge, and they give the garden movement when the wind blows,” says Herman, noting the subtle tones of the mass plantings also shift throughout the seasons so they are striking even in winter.

A series of steps on one end of the pool leads to the oak, which makes a grand statement on the highest point of the property. The opposite side leads to a meadow where a stand of birch trees and low maintenance fescue define the space. Immediately adjacent, a maze created for the couple’s three daughters leads to an in-ground trampoline and play area. “Breaking the property into so many different rooms made it feel larger,” explains Herman.

Bluestone pavers, a nod to the local vernacular, point the way to the sunroom, which thanks to all steel windows reads like a contemporary projection on the the traditional structure. More bluestone in a patchwork pattern forms the patio of the outdoor dining room, and a floating fireplace sculpted from monolithic slab of the same material provides the centerpiece for the sitting area. “It’s a traditional material used in a contemporary way,” says Quinn.

Throughout the property, understated plantings establish the perfect backdrop for all of the family activities including entertaining on the patio, impromptu soccer games in the lawn room or just hanging out by the pool. “Everything is simple and legible,” notes Quinn about the success of the plan. “And it adds a little mystery when you enter a landscape and can’t see everything at once.”

A version of this article appeared in the May 2016 issue of CTC&G (Connecticut Cottages & Gardens) with the headline: Dutch Masters.