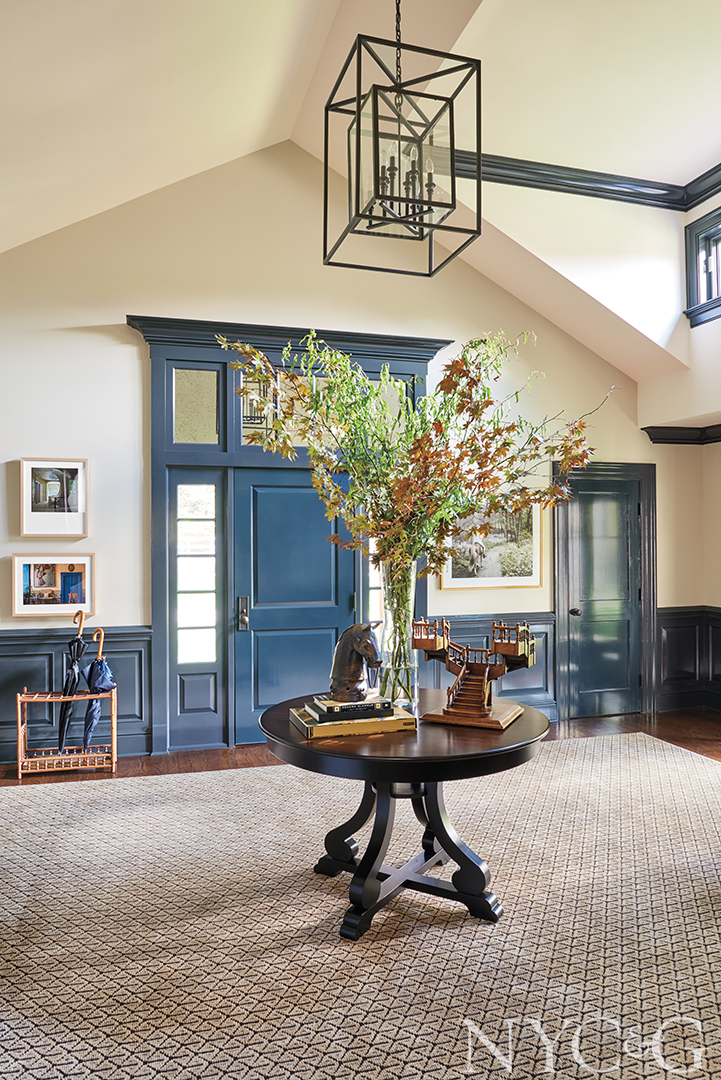 When Lindsey and Ben Doramus went looking for a country home to augment their city life in Manhattan, they fixed on a stone-and-shingle stunner on 10 acres of wooded land in Pound Ridge. On first glance, the structure seems to have been rooted on the property for as long as the sheltering trees that surround it. In fact, it’s a developer spec house that was nearly brand-new when the couple bought it in 2015.

“The house is Adirondack-style from the outside,” says their interior designer, Garrow Kedigian, “with some whimsical interludes in its architectural language. It’s a charming house in an idyllic setting.” The interior, however, wasn’t quite as captivating. “Inside, it was just a drywall box.”

Although Lindsey Doramus is a Parsons-trained interior designer, she balked at decorating the 5,600-square-foot home on her own. “I had only worked on small apartments in the city,” she explains, “and this was overwhelming.” Doramus found Kedigian on television, on NBC’s Open House, during a segment where he was giving a tour of his Park Avenue apartment, which was once owned by Fred Astaire. “I initially hired Garrow to help with the paint colors, but he wound up doing pretty much everything.” 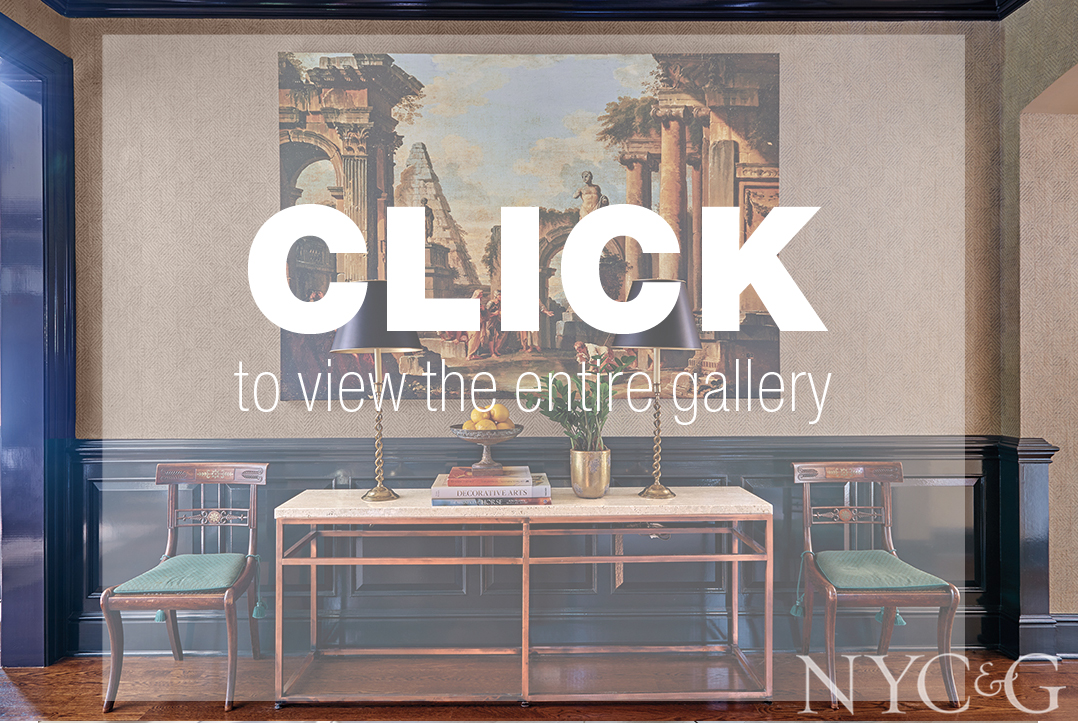 “The interior lacked architecture,” Kedigian remembers. “It had minimal moldings, not what you would expect in such a grand house, and issues with proportion and scale, which are important to my design work.” The native Montrealer, who trained as an architect at McGill University, found the soaring entry foyer a particular challenge. “I wanted to raise the front door and give the house a grander entrance, but there’s an eave right above the door, so I wound up adding additional paneling to make it more of a focal point. I also added crown moldings to the room, and then painted all the millwork in a high-gloss finish.”

Paint is something of a calling card for Kedigian, and he used lots of it here. The dining room, for instance, is the same shade of blue as his own library. “Lindsey had actually cut a photo of my library out of a magazine years ago,” he recounts, “but didn’t realize that it was mine until after she hired me.” The Benjamin Moore Mozart Blue “is perfect for the room’s quality of light,” and the high-gloss finish “gives the space a bit of extra sparkle, which is magical at night.”

To create a little “push-pull” between the dining room and the living room, Kedigian chose orange for the latter, although he calls it ‘“clementine, which is a much softer word.” (Benjamin Moore doesn’t pull any punches and calls it Outrageous Orange.) The master bedroom’s Bavarian Forest, a dark teal, was inspired by the clients’ stay at the Chiltern Firehouse hotel in London. “Garrow convinced us to paint the ceiling, too, which I was totally not on board with, but now I’m glad we did it,” Doramus says. “The room has just the cozy feeling we had experienced at the hotel.”

Throughout the house, Kedigian juxtaposed all that gloss and shimmer with textured fabrics and rugs, mostly from Stark, aside from a geometrical Native American–inspired Ralph Lauren rug in the sitting room. “I showed Garrow a photo of it,” says Doramus, “and said, ‘I hope you like it, because we just bought it!’” Furnishings range from pieces already owned by the couple to vintage and antique additions bought in the flea markets of Paris and upmarket galleries of Connecticut to custom sofas, along with items from mass purveyors like West Elm, RH, and Anthropologie.

Artistic grace notes include some “old masters” by Kedigian himself: unframed prints on canvas made from transparencies of public-domain museum and auction house paintings. The striking red gestural brushstrokes above the dining room banquette, meanwhile, are signature works by British artist James Nares.

Blessed with such creative freedom, Kedigian considers himself “lucky to have had Lindsey as a client, because she understands the concept of pushing the envelope and taking a fresh look at things,” he muses. “She’s young and playful and wanted a house that was both modern and traditional, but never predictable.”

A version of this article appeared in the September 2018 issue of NYC&G (New York Cottages & Gardens) with the headline: Suburban Splendor.