Tour a Connecticut Garden for All Seasons 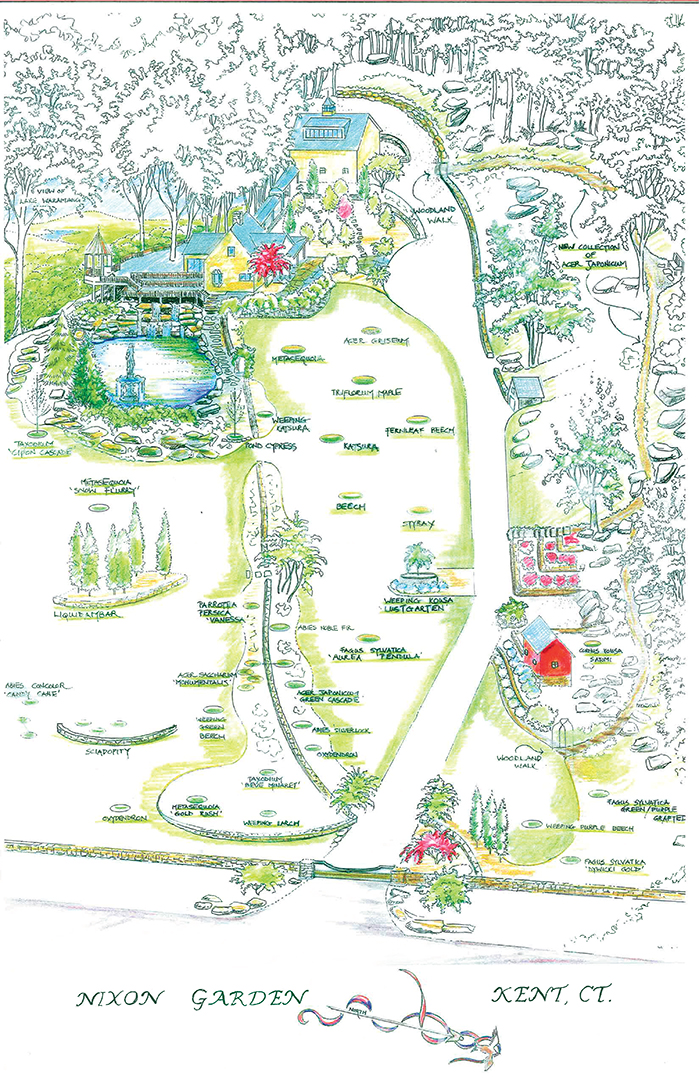 Buddy Nixon has moved up from perennials, in many cases several stories up. When he bought his South Kent property with wife Monika Steinberger in 1980 and built the house, the newbie gardener took the typical perennial route. The bigger picture didn’t reveal itself until Nixon retired from the corporate world and started laying stonework with his usual, “I can do this” self-motivation. Since then, his property has swollen to 34 acres with the acquisition of a former mica quarry. And he’s amassed a collection of 500-plus arboreal specimens.

Not only can he talk a mean streak about the magnificent weeping golden beech that serves as the property’s centerpiece, but Buddy Nixon is an outspoken educator on all things woody. Find out for yourself at his Garden Conservancy Open Day on June 16th or attend the Garden Conservancy Digging Deeper event at Mica Quarry Estate on June 22 (go to gardenconservancy.org for info). So what makes trees superior? Well, for starters, they provide a majestic presence throughout the seasons. 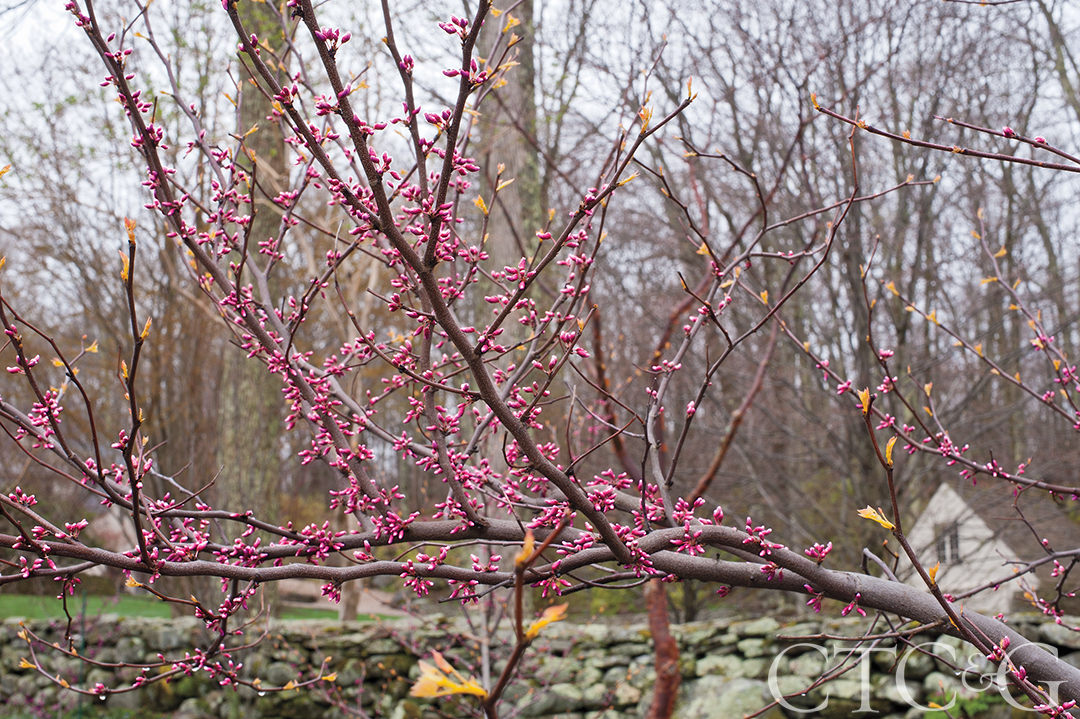 The fact that Buddy Nixon made the leap from stone walls to trees is telling. Clearly, he’s all about emphatic statements. That said, although poetic silhouettes are paramount, he still feels that tingle accompanying the initial inklings of spring. In Nixon’s case, spring flowers don’t just strew the ground. Color goes aloft with a vertical swell of freshly burst leaves accentuated by the savvy siting of trees with chartreuse foliage playing counterpoint against deep bronze and flashy reds. 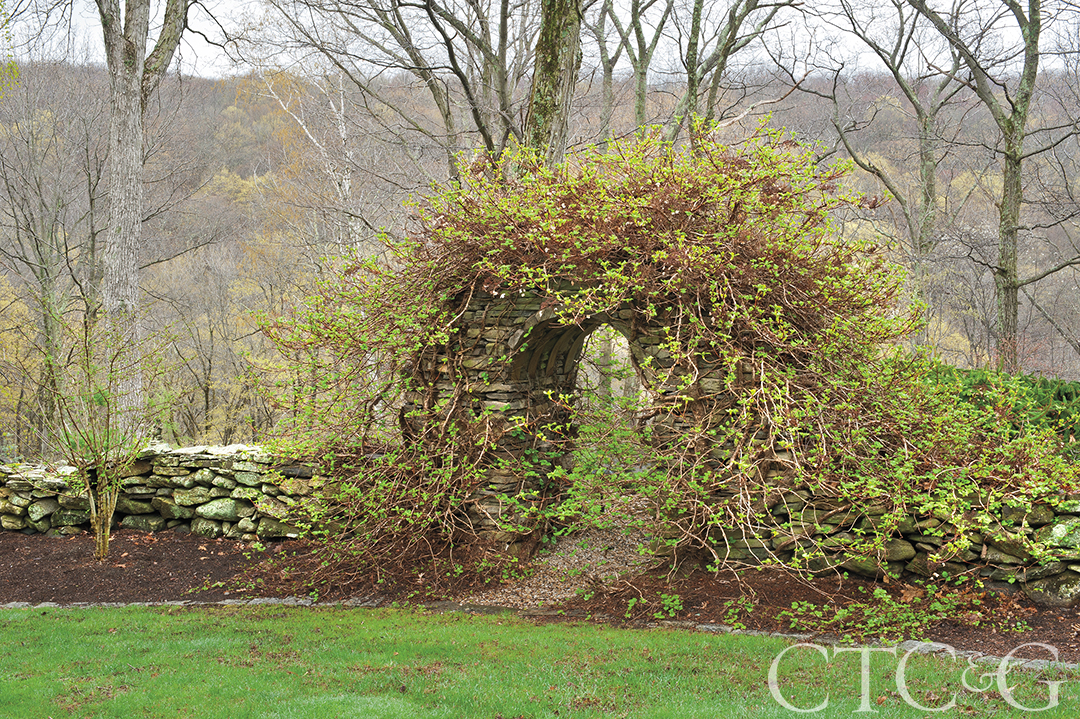 Given plenty of breathing room between plants and groomed to perfection, the spring pop is particularly eloquent. Add the accents of redbuds and other spring bloomers, and you have a surrounding lacework that stirs your heart. What doesn’t amuse Nixon in the least are “two week wonders” such as forsythia and crabapples. Instead, he demands poise over the long haul. Like all love affairs, beauty results from interaction and dialogue. In spring, he’s busy assessing the dynamic of his puzzle pieces and shuffling trees in that brief window when the weather is cool and hopefully wet. Some trees are forever, while others are more mobile. 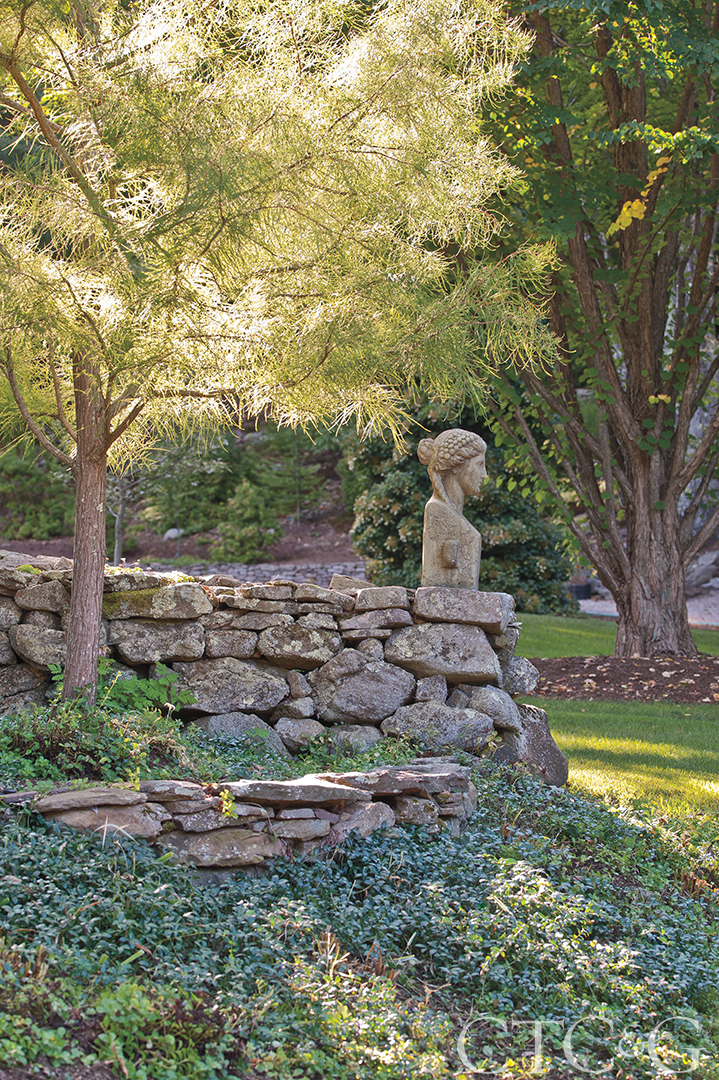 With so many trees, a prevailing lushness rules summer in Nixon’s realm. Having selected trees for their diverse foliage and individual forms, the textural interplay is high prime when everything is full and leafy. With plenty of shade (“We can sit on the bench under the horizontal beech and not even get wet in a rain storm”) and breezes fanned by limbs from above to keep the property cool, Nixon spends summers monitoring and fine-tuning his domain. “It’s about turning an ordinary tree into an exceptional tree,” he explains of his hand-sawing strategy. Meanwhile, he specializes in trees that extend the performance season beyond the usual spring and autumn window when trees typically step out. A favorite late summer performer is Heptacodium miconioides, a bulletproof tree with exfoliating bark crowned with abundant fragrant flowers in late August and early September. 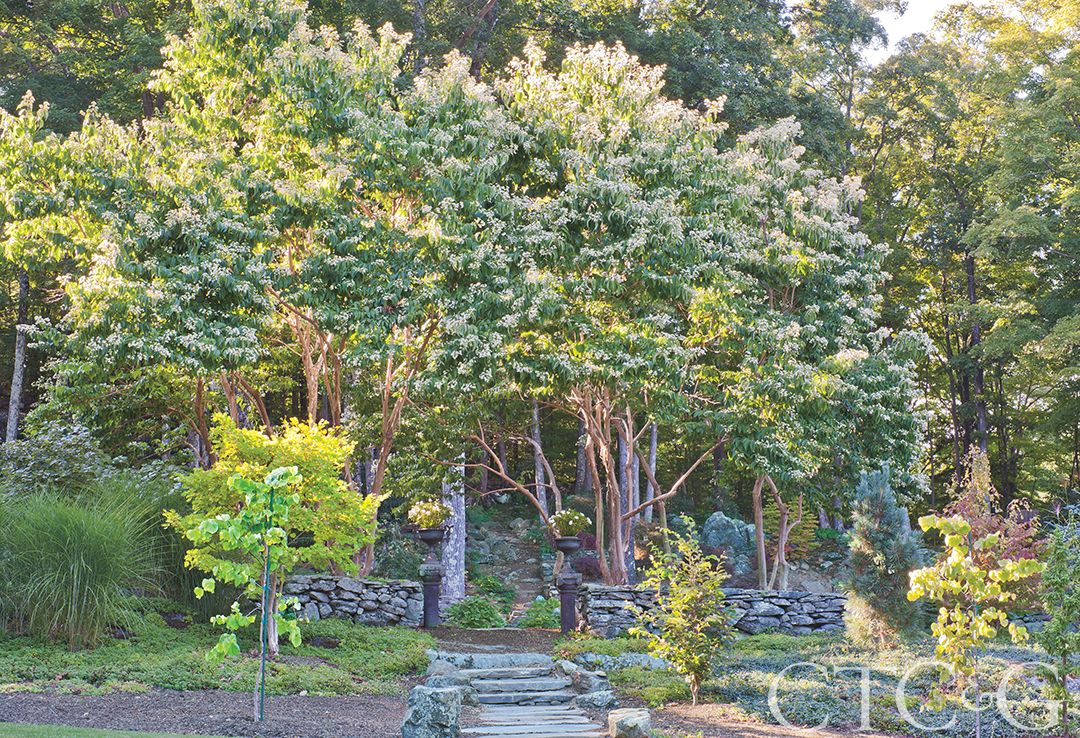 Similarly, stewartias form their camellia-like white blossoms in the heat of season. Although perennials are not big on his want list, he carpets areas with low-maintenance groundcovers such as sedum. Plus he travels around, hunting up woody wonders to add to the exhibition. 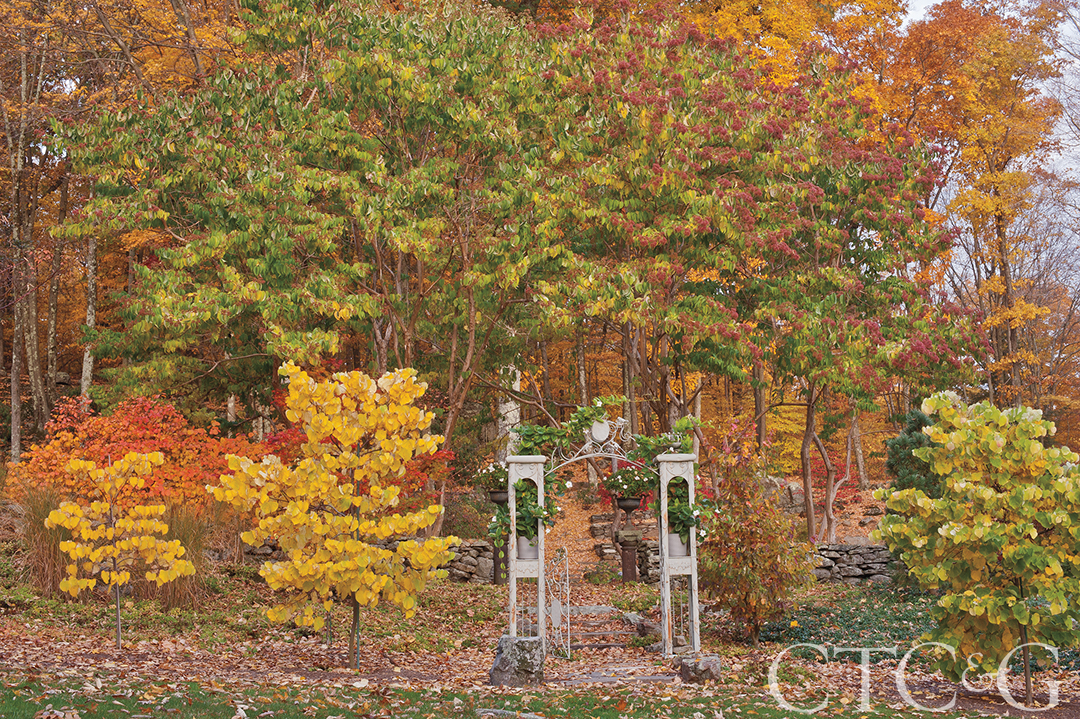 Autumn is forever tweaking its wardrobe as trees gradually blush or blanch and then begin to go naked. “The subtle variations in color are outrageous,” Nixon has noticed. His style is to design in groupings—or groves—combining several specimens of a cultivar together to make a massive color statement “and create a natural effect,” echoing the stands of trees that happen in the wild. 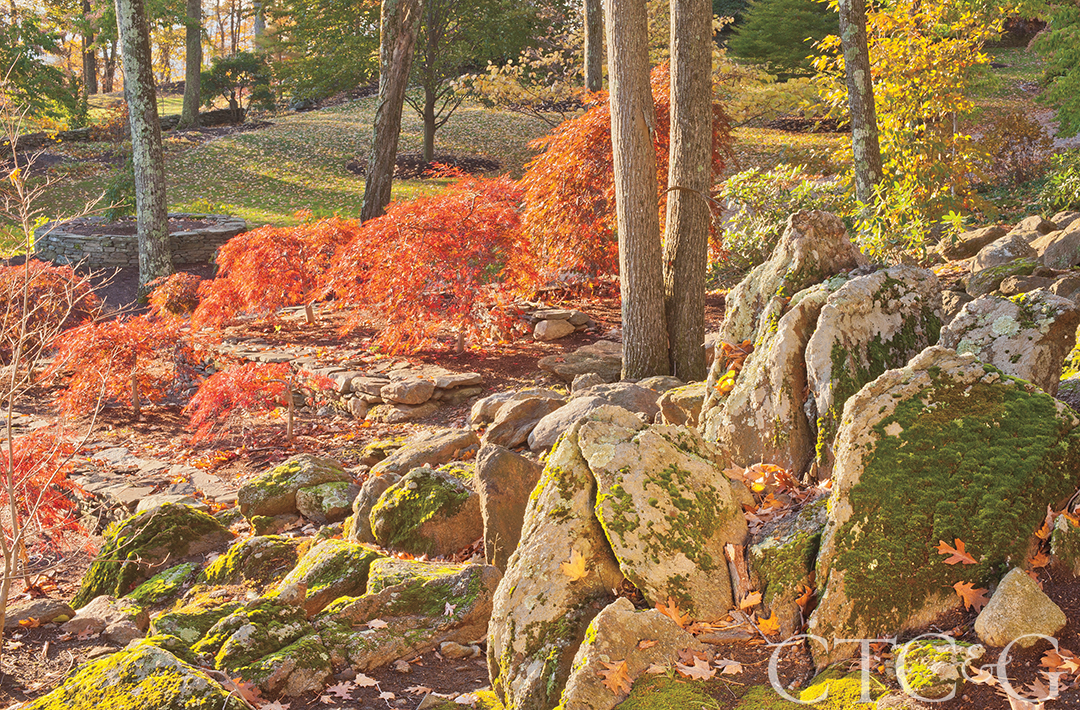 Even combined with kin, individuals from different sources have slight variations in fall color leading to a sublime display. And importantly, trees are always given plenty of breathing room to accent each element. “Spacing is the almighty,” says Nixon. “Think of the span, not just the height.” Fall is also when newly installed trees shine as smaller additions show their true autumn colors. Nixon generally plants fledgling trees—primarily because the varieties he obtains are rare and he’s on a waiting list. Surveying the scene from his high altitude, the colorful background makes his homeground efforts all the more ravishing. Distant trees offset the bounty in residence. 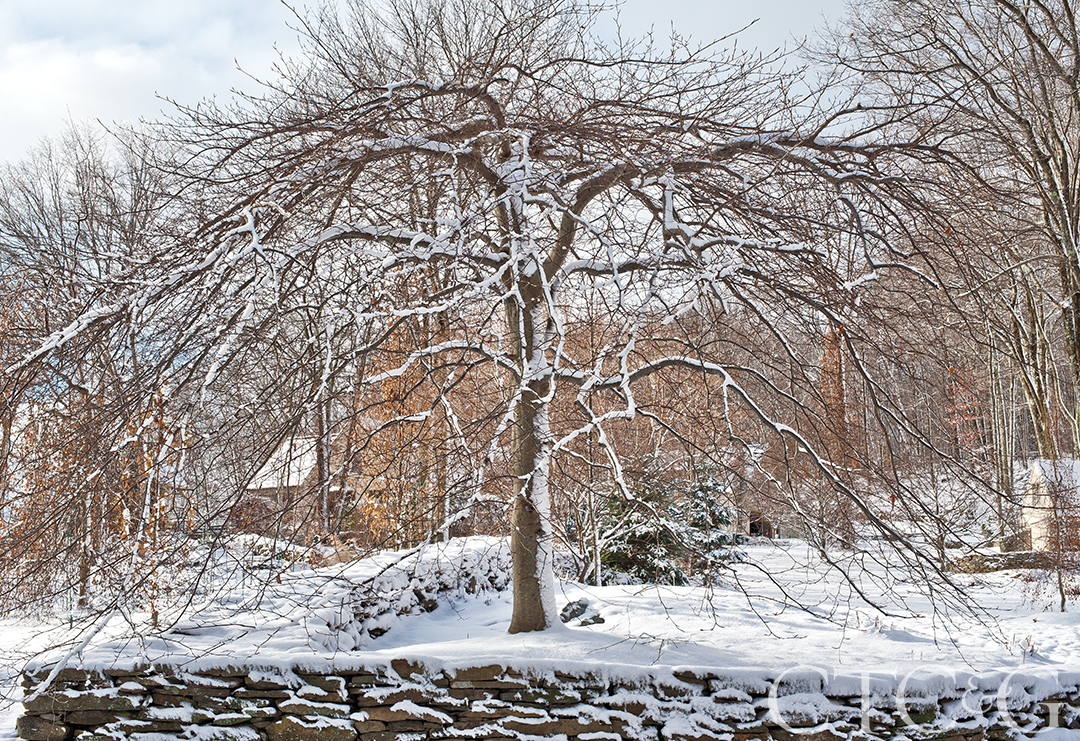 Not only is winter when all the carefully wrought stonework steps out to define spaces, but the trees make this scene statuesque. There’s something about stone and woody trunks and branches that is heart-arresting. But again, Nixon hasn’t left this to chance. He has sculpted his trees into forms—parasols, weeping forms and vase shapes—that are particularly head-turning when stripped of leaves and etched in snow or ice. Proper open pruning ensures that revered rare trees will not succumb to snow load. He also selects trees specifically for their winter interest with exfoliating bark and intriguing trunk coloration high on the list of virtues necessary to qualify for inclusion in the property of a confessed tree snob. That said, birches need not apply. “Too short-lived,” he decrees. But still, many trees that you never met before are welcomed here. Hint: These same performers might be apropos for your little kingdom. With very little provocation, he’ll hand you a long list that correlates with the meticulously labeled specimens in his domain. For seasons of splendor aloft, do try this at home.

A version of this article appeared in the February 2019 issue of CTC&G (Connecticut Cottages & Gardens) with the headline: A Garden for All Seasons.