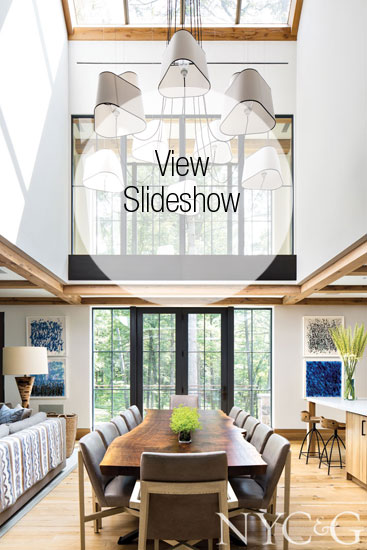 There’s no question about the standout features of the lakefront property owned by veteran beauty editor and author Andrea Pomerantz in Westchester County. The inviting waters and ancient trees lining the shore are postcard perfect, but the cramped, mid-20th-century cottage Pomerantz and her family had been using as a getaway for years was decidedly less inviting. “The house was just so awful, we basically lived outside,” Pomerantz says, describing heady days spent kayaking, swimming, biking, and waterskiing. “My kids are all skaters or hockey players,” she adds, “so when the lake freezes in winter, we spend a lot of time on the ice, too.”

Pomerantz and her family had always planned to replace the cottage, and ultimately she and her husband hired Manhattan-based architecture firm Workshop/apd to build a brand-new abode. “Their mandate was, ‘We want a lake house,’” recalls firm principal Andrew Kotchen. “Nothing more, nothing less. They didn’t want a shingle-style Hamptons home or a cookie-cutter Greenwich mansion.” As Pomerantz puts it, “We wanted to feel like we lived in a tree house.”

For inspiration, Kotchen looked to one of his favorite haunts: Blue Hill at Stone Barns, a popular locavore restaurant that was once a milking barn for the Rockefeller estate in Pocantico Hills. He also researched historic lake houses across the country, even though the plan he eventually came up with was thoroughly modern in scope.

Pomerantz was initially skeptical about going so contemporary, although she did agree with Kotchen on one thing: the entryway. “It was Andrew’s brainstorm,” she says. “He wanted the house to have a view of the lake right from the front door.” The entry forms what Kotchen calls a “gasket” between the house’s two volumes—one for the adults, and the other for the kids. But it also meant the end to her husband’s dreams of an old-school dwelling with a wraparound porch. The trade-off, Kotchen argued, is the light that now streams through multiple windows from dawn to dusk.

The house adheres to the “less is more” theme Pomerantz embraced during her years as a beauty author and editor for Glamour and Cosmopolitan as well as Sephora.com. “Just because you spend money doesn’t mean you’ll look over the top,” she says. “I didn’t want to overdo the house; I wanted it to feel like a retreat. There’s just not a lot of extra stuff here.”

Kotchen further connected the three-story dwelling to the nature surrounding it by creating a variety of indoor and outdoor levels, such as lounging areas, sleeping lofts, exercise and media spaces, decks, and a floating glass bridge that hovers between the family room and a deck. His firm employs a “crafted modern” philosophy, one that blends forward-thinking design, natural materials, and old-school craftsmanship. During excavation, Kotchen had five men chip away at the abundant granite underlying most of the property for a year—by hand—and then repurposed it as a surface material throughout the house. He also incorporated steel and aged-looking wood beams, white oak floors that appear knotty (purposefully installed early on in the process, so they would be marked up by heavy foot traffic), and shingles made from hand-split, rough-hewn oak. “We’re in the woods,” he says. “When you look out, all you see are very tall trees. It was important to bring the outside in.”

Even though there are countless nooks in which to read or nap, Pomerantz and her family tend to gather in the open spaces. “Everything’s exposed,” she says. “There’s always someone up on the bridge above the kitchen talking to people down below. That’s even our Australian Labradoodle’s favorite place. He plops down right where he can see everything.” Most important, Pomerantz adds, is the house’s successful integration with the thick forest canopy that surrounds the property. “We really do feel like we’re up in the trees.”

A version of this article appeared in the October 2015 issue of New York Cottages & Gardens with the headline: Woods & Water.