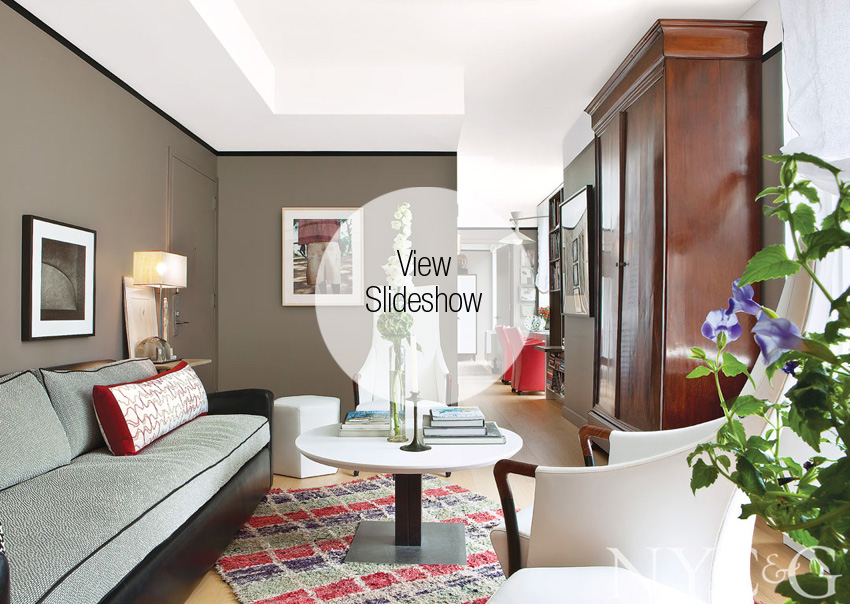 Given all the residences that Paul Siskin has designed during his illustrious 30-plus-year career, one would think he had met every decorating obstacle imaginable. But not quite.

When he relocated last year from a prewar building on West 58th Street to a contemporary high-rise in Hell’s Kitchen, he met a challenge of great proportions—or tiny proportions, as it were, given the minimalist pad’s 550 square feet. “I’ve never lived in or really worked on a modern space before,” says Siskin, who launched his firm, Siskin Valls Interior Design, in 1984 with former partner Perucho Valls. “It’s small, but in truth, I don’t need much more than this. I was drawn to all the natural light.”

The one-bedroom was intended to be temporary until Siskin found something larger. “I kept all my belongings in boxes for several months because it didn’t feel like home at first,” says the designer. “But I got tired of looking at the white walls, so I painted them.” Siskin chose Farrow & Ball’s Charleston Gray, which proved to be just the right catalyst for making the place his own, once he decided to stay.

To bring definition and a sense of history to his new digs, he painted a thin black line directly below the soffit, which acts as a picture molding and gives the appearance of higher ceilings. He also installed a few beloved furnishings, such as an eight-foot-tall mahogany armoire that looms large in the living room. “Perucho and I found it in the 1970s in the back of an antiques store in Bucks County, Pennsylvania,” says Siskin, a California native who got his start working for decorator John Saladino. “I’ve brought it with me to each of my homes, and I always will.” Further additions to the living room include a 1950s Moroccan carpet with red accents. “I love red, but my clients never let me use it. The rug’s vintage condition really works in a brand-new space like this one, which needs texture and imperfection.”

Playing foil to the carpet is a bold red chintz curtain, which Siskin has brilliantly employed to separate the living room from the kitchen. “I’m not trying to pretend that I don’t have a kitchen,” he says, “but I couldn’t stand sitting on the sofa and seeing the stove and refrigerator.” A better vantage point lies down the long hallway, which incorporates a library and work area and terminates in the master bedroom. In the middle, Siskin has positioned a desk in front of an expansive window overlooking the Hudson River. “When I saw the apartment, I knew immediately that I’d use that spot as my office. It’s like a separate room.”

The residence’s finishing touch? Siskin’s carefully curated art collection, including photographs by his friend Larry Lederman and by his cousin Lynn Davis. “I like having artwork by people I know because it has more emotion and meaning to me,” he says. “My main goal was to get rid of any sterile, cold feeling and make my home a very personal one.”

A version of this article appeared in the September 2016 issue of NYC&G (New York Cottages & Gardens) with the headline: Small Wonder.