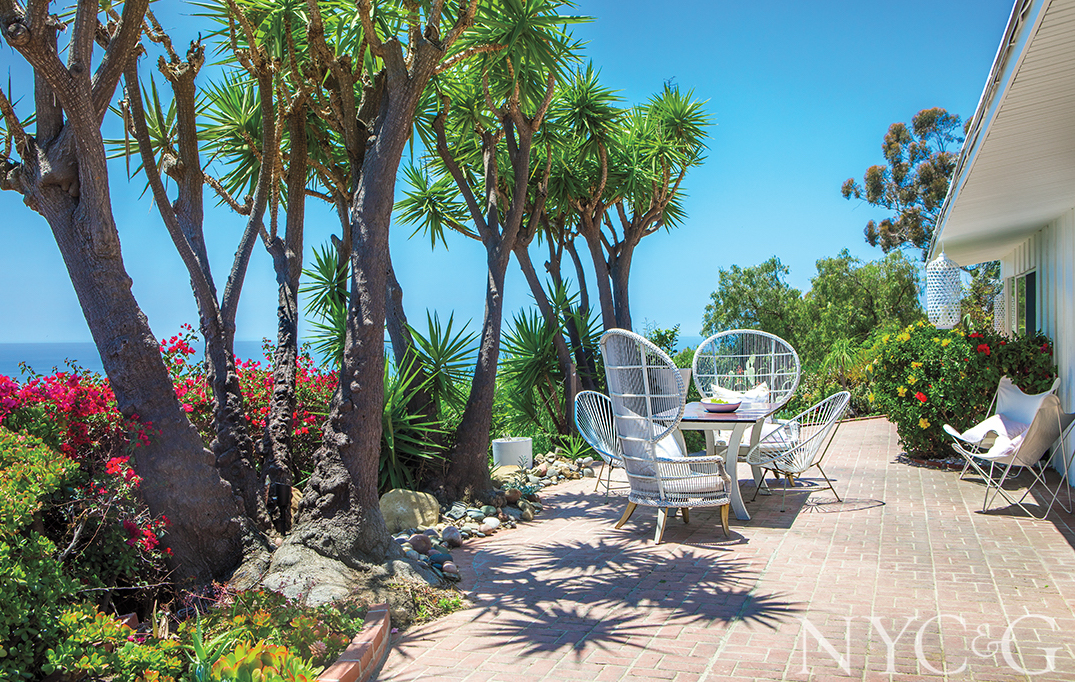 In 2015, newlyweds Stacy Sindlinger Rivett and her husband, Mark, had just moved from his tiny Venice Beach bachelor pad to a freshly renovated three-bedroom house a few blocks away.

Not that they necessarily planned to stay there for the long haul. “I love checking out real estate listings online—whether they’re in Greece or Byron Bay or Santa Fe or Palm Springs,” Rivett says. “We are both passionate about finding rare properties with lots of potential and mojo—places that might need more vision, TLC, and sweat equity than most homebuyers are willing to invest. We love bringing them back to life. It’s our hobby.” 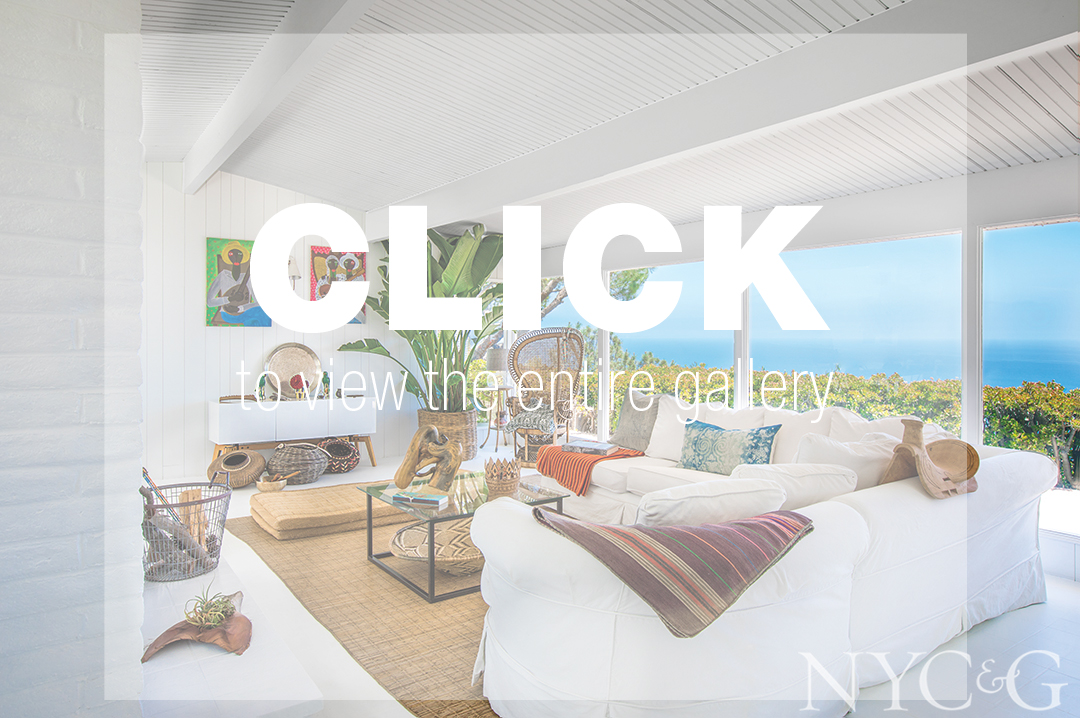 Surfing the Web one night, Rivett clicked on an ad for the Malibu house featured on these pages. “This place had so much going for it, and there was a 180-degree view of the water,” she says. “Not much had been done to it, and we could afford it, which was amazing for the location.” She happened to be out of town, so her husband went to an open house, after which he called her and said, “I think we’re in trouble.”

The home had been built by an architect “who had done a lot of mid-range houses in the 1950s and ’60s,” Rivett says. “The frame is very ‘mid-century ranch,’ which we loved, but we didn’t want everything to be mid-century. For us, that becomes boring.” The couple bought the house from the original owners’ children. “I think they wanted someone who wasn’t going to rip it down and build a McMansion. They appreciated the fact that we loved it the way it was.”

Thanks to its cliffside perch, with virtually nothing but native plants and the Pacific Ocean in sight, the house is flooded with light, even on misty days. “You will have no vitamin D deficiency here,” says Rivett. “You can’t be unaffected by the light; it’s not allowed. And the view of the ocean is like a dream sequence where someone has put a backdrop of an exotic vacation destination behind you. But what’s really unique is the old-growth vegetation, planted by the previous owners over the years. It’s the sort of thing you could never buy or re-create.” Among the flora are eucalyptus and yucca trees, camellias and hibiscus, blue agave, frangipani, bougainvillea, cactus, and jade. “Break off a piece of something and throw it down the hill, and two weeks later it’s growing. That’s just as magical as the ocean.”

The couple had no intention of upstaging the property’s natural beauty, but the house’s interior needed some work. Earthy wood grains, beige floor tiles, and a light blue ceiling positively underwhelmed, and white became the home’s salvation. “White reflects light so well,” says Rivett. “The only thing white was the front door, and that’s the only thing we painted another color.” (It’s a striking Navajo blue.)

Subtler structural changes were also in order. Walls came down in the kitchen, which was “a big challenge, because we wanted it to look like nothing had changed, even though everything had to change,” Rivett recounts. “There were burners under cabinets and a wall where the counter island is now, so you couldn’t see the ocean. We just needed the space to flow into the rest of the house.” Other “wet rooms,” the bathrooms, were completely modernized to accommodate luxuries such as a Japanese soaking tub and a handheld shower in the open-air guest bath, handy for rinsing off after morning surf sessions.

The rest of the rooms didn’t need much tweaking, aside from paint and decoration, principally artifacts from Rivett’s travels and a deeply personal art collection, notably the master bedroom’s tree-of-life painting by Santa Barbara artist Erika Carter. It was in the works before the couple bought the house and “originally meant for the kitchen in Venice,” Rivett reports, acknowledging that the woman in the painting looks somewhat familiar. “My beautiful husband sneakily sent the artist a photo and asked if she could make it look like me,” she says. “She’s even wearing a little bracelet with an ‘S’ on it.”

Tucked in corners everywhere are a mix of exotic and local objects—from African baskets to petrified-wood slabs that “took three strapping guys to move.” The decor’s global undercurrent “just sort of evolved since my career centers around indigenous art and crafts,” says Rivett, who has worked in the NGO handcrafts world and currently curates the artifacts sold on Lindblad Expeditions ships, which partner with National Geographic to cruise everywhere from the Galápagos Islands to Belize to the Amazon to French Polynesia, in addition to the Arctic and Antarctic. “My work is really a combination of poverty alleviation and design. Wherever the ships go, I meet the crafts community, learn the culture, and assess the needs of the artisans.” Rivett also co-founded and runs the Lindblad National Geographic Artisan Fund, which uses profits from sales of handcrafts on the ships to do everything from preserving the nearly lost art of raven-tail weaving in the Haida Gwaii islands off the coast of British Columbia to creating a program in Ecuador where the refuse of tourism—paper and glass bottles—is turned into income-generating art.

“I’m not the type of person who needs to have everything clean and pristine,” Rivett says. “I like how the house’s white shell makes the art and artifacts stand out.” The pair of vibrant canvases in the living room were painted by a Lindblad-sponsored Cuban artist. The images of Australian budgies in the office are by conservationist and photographer Leila Jeffreys. The yarn-covered horseshoe and small ceramic ornament that hang from the home’s original doorknob are by a Venice Beach artist. “I’ve had a personal relationship with, or worked with, or bought directly from the artisans who made almost all the handcrafts in the house.” Some of the African and Central and South American baskets in the living room are worth thousands of dollars, she adds, but the “tattered crown of palm fronds and balsa wood, given to me by the indigenous Emberá people in Panama to thank us for the work we’ve done with them, is priceless. It means the world to me.”

A version of this article appeared in the December 2018 issue of NYC&G (New York Cottages & Gardens) with the headline: Malibu Magic.