Tour a Fairfield Home with an Old World Feel 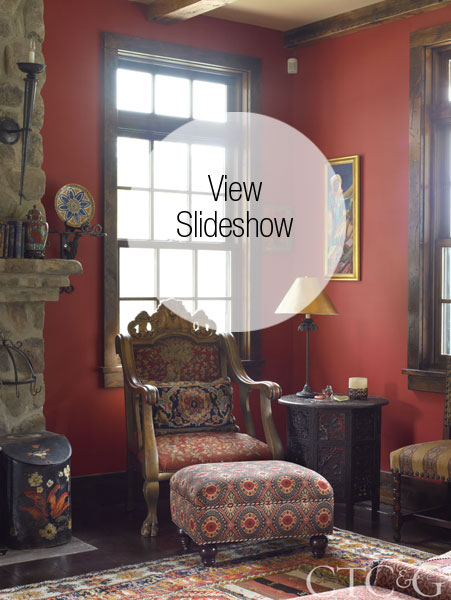 Can a house become a living representation of the owners, a place that embodies the souls and personalities of the inhabitants? Ask Cynthia Davis and she’ll say, of course. For she has imbued the interior of her 5,000-square-foot, four-bedroom, three-fireplace home with her personal, social and creative life, as well as that of her husband and children.

“I have a constant need to create, and I love the look and feel of antique textiles and expressing myself through my work,” says the decorative artist, as she ambles through the Fairfield house she and her husband, Joel (who owns a trade show business), and their two children moved into last January after almost two years of construction. Davis worked closely with architect George Dumitru and builder Jeremi Jablonski to create a home that’s not only rich in artistic diversity but also approachable and comfortable. “The homeowners wanted a mostly open floor plan,” says Dimitru, “so the entire first floor has few walls. From the fireplace in the family room, you can see all the way to the fireplace in the billiards room.” Much of the interior is Old World in flavor, featuring purchases by Davis on her various trips around the United States and Europe. What catches the eye immediately upon entering the kitchen is a marvelous stove backsplash constructed of six terra-cotta decorative squares that were pieced together to form a single image. The tiles are actually from a building in Chicago and each weighs about 40 pounds. “I saw them sitting on the lawn at the Brimfield Antique Show and fell in love with them,” says Davis. “It inspired the rest of the kitchen design.”

Next to the dining room, the home’s stairwell features a seven-by-seven-foot mural painted by Davis. “It was influenced by a trip I took to St. Francis Basilica in Assisi, Italy,” notes Davis. “It’s painted with earth pigments over a stucco plaster finish to replicate an Old World fresco.” The walls are a Venetian plaster finish engaged with a rusting solution.

Included in a large second-floor art studio are two tables and a cabinet that were custom made by Jeremi Jablonski’s carpenters on the job site. An upstairs yoga room (“It keeps me centered,” says Davis) is the family space for meditation and yoga practice and is replete with cushions made from fabrics collected in Morocco, Peru, Italy and France. Davis has a broad social consciousness and is involved in a number of social initiatives. She’s a 2011 Carl Wilken’s Fellow with United to End Genocide in Washington, D.C., and is founder of The Sudan Canvas Project that uses art to raise awareness of the conflict in that African country.

Jablonski used reclaimed wood for ceiling beams that crisscross the entire length of the house and other recycled material (metal pipes to extend the light fixture over the billiard table, nails and handles from an old Vermont barn for the refrigerator handles, refurbished antique servers for the bathroom vanities) in the interior of the home. “To make this house more energy-efficient, among other things, we installed geothermal HVAC and dense foam insulation,” says Jablonski.

“This home is really top-of-the-line for energy efficiency,” adds Dumitru.

The couple’s choice of a Vermont-style exterior is again symbolic; they met at the University of Vermont. “They like to vacation in Vermont, so we went in a contemporay farmhouse direction, and then let our imaginations fly,” says Dumitru. A circular stone tower rises in the middle of the dwelling, stone pillars adorn the front porch, the roof is covered in cedar shingles, and the siding is red board and batten, all of which conspires to create a rustic look. “It was a courageous move to bring a contemporary farmhouse with red siding to the Fairfield County landscape, but it really complements the neighborhood,” says Dumitru. “It sits next to a golf course, land preserve and a horse farm, so it couldn’t work any better.”

A version of this article appeared in the October 2012 issue of CTC&G (Connecticut Cottages & Gardens) with the headline: Good Karma.