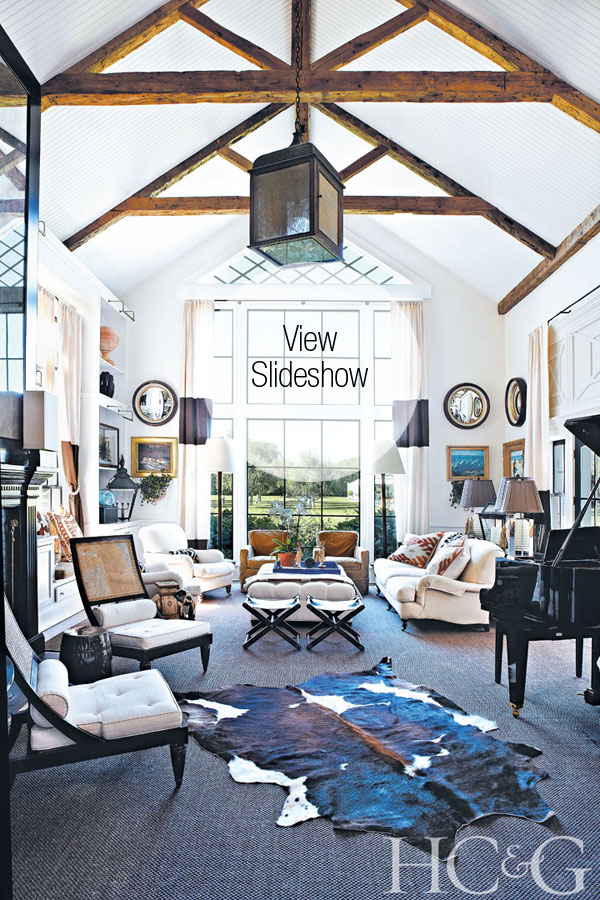 A visitor’s first clue to life chez Jeffrey Pfeifle is a sign on the front gate to his four-acre property in Water Mill. It reads: no jackets required. Looking for more clues? Consider the 30-foot-tall plastic snowman hanging on the flagpole, the karaoke machine on the guest bedroom landing, and the obligatory canvas bag that’s handed out to guests so they can pick their own apples in Pfeifle’s orchard.

A Buddha water fountain marks the formal entrance to the house, at the end of a long, winding drive. For Pfeifle, the former president of J. Crew, it’s a fitting reminder that leisurely world travels beat bi-monthly business trips to Hong Kong any day. And Pfeifle is nothing if not well traveled. Though he counts many decorators among his friends, he has personally curated his surroundings, incorporating dozens of discoveries from his journeys far and wide. “I’d describe my style as eclectic,” he says. “It’s not really identified with one period, although I’d say it’s traditional with a modern edge.” 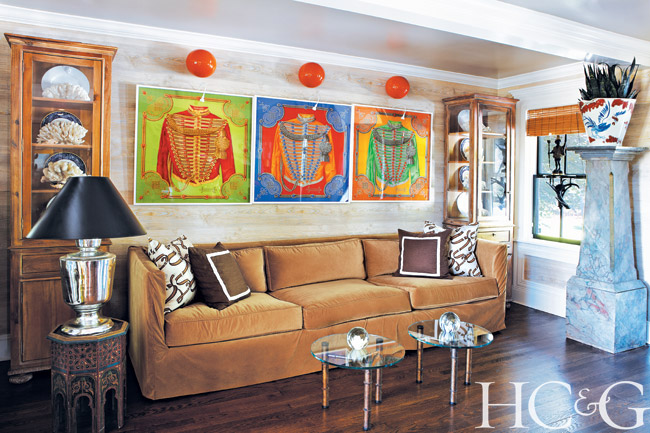 Pfeifle purchased the 5,500-square-foot house six years ago—his fifth during a 25-year love affair with the Hamptons. “I like the rambling aspect of the house and the fact that it’s so spread out,” he says. “It makes it feel bigger than it really is.” Along with his partner, real estate agent David Granville, he set out to create an inviting, enchanting oasis that can accommodate any occasion, from a romantic dinner for two to a fantastic fundraiser for 400.

The original part of the home, which dates from the 1700s and includes the current dining room and a cozy fireplace, was moved to the present location, with newer wings added later. As with many Hamptons houses, “the kitchen is in the center of everything,” Pfeifle notes, “and the house is great for entertaining. It’s a nice gift when people cook and make a fuss over you.”

While he and Granville might fuss, though, their parties are anything but fussy, whether it’s pasta for eight under the wisteria-covered pergola or a Thanksgiving dinner for 60. (A secret to their successful relationship, Granville adds, is that “we both work very well in the kitchen together.”) Not only can you leave your blue blazer at the door, but you can check your country club rules, too. Pfeifle and Granville’s guests are more likely to show up in kimonos and Mao jackets for a take-out Chinese feast under paper lanterns, with a robust sing-along to follow. 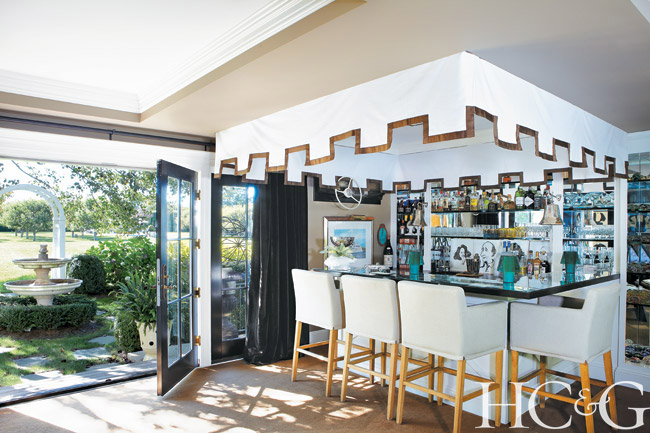 Artifacts from parties past, in fact, have become permanent decorating elements, like the collage of snapshots on the tented indoor bar and the hand-written thank-you notes lining the walls of the nearby powder room. Philanthropy is important to Pfeifle, who often opens his home to host fundraisers for charities such as God’s Love We Deliver. “There are so many events in the Hamptons,” he says, “and it’s always more meaningful when the host is also deeply devoted to the beneficiary organization.” For such occasions, Pfeifle takes advantage of the ample grounds, which include a massive lawn, pool, and pool gazebo, plus a stylish retro tiki bar, converted from an old shed. “The house and grounds face west, so sunsets are over the top,” he adds.

Pfeifle and Granville are also passionate about art. “We’re saturated here,” Pfeifle says, surveying the living room and laughing. “We don’t have any more wall space left to put anything on.” Works in the couple’s collection range from nautical landscapes by a Nantucket artist to their friend Peter Hallock’s photographs of India to regal dog portraits bought at the Animal Rescue Fund thrift shop. “It’s kind of a revolving collection,” adds Granville. 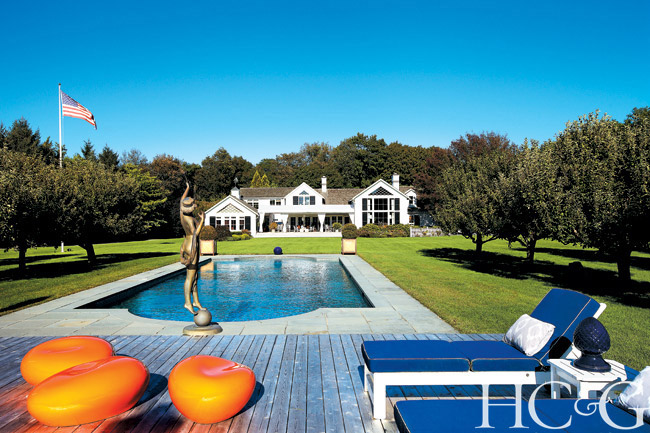 Pfeifle is a board member of the ASPCA, and the couple’s two King Charles spaniels and cockapoo are near and dear to their hearts. (The gargantuan tusks framing the entry to the living room are actually fiberglass.) Lots of animals, lots of guests, and frequent visits from each man’s family members mean the house’s six bedrooms are rarely empty, though the master suite is discreetly tucked away in a corner of the first floor. “It sounds like I’m old and crotchety,” Pfeifle says, “but I’ve never had a house with a master on the first floor before. We actually have to force ourselves to go upstairs!” A his-and-his bathroom and workout room complete the massive space, which overlooks individually lit apple trees in the orchard. “I love this house at night,” adds Pfeifle. “Looking at the trees lit up—it’s such a pretty view.”

In nearly every room, nautical and natural themes abound, from a print of sailing knots to pictures of Pfeifle’s Westport 112 yacht, Sea Loafers III. “We bring it up from Florida to Sag Harbor for the summer,” says Pfeifle. “I love anything having to do with the water.”

“The boat’s like another house for us, and it’s great for entertaining,” Granville adds. Even the dogs love it—they have their own life preservers.”

A version of this article appeared in the June 2014 issue of Hamptons Cottages & Gardens with the headline: Water Mill Wonder.

10 Years of 'NYC&G': A Young Decorator Takes the Dakota