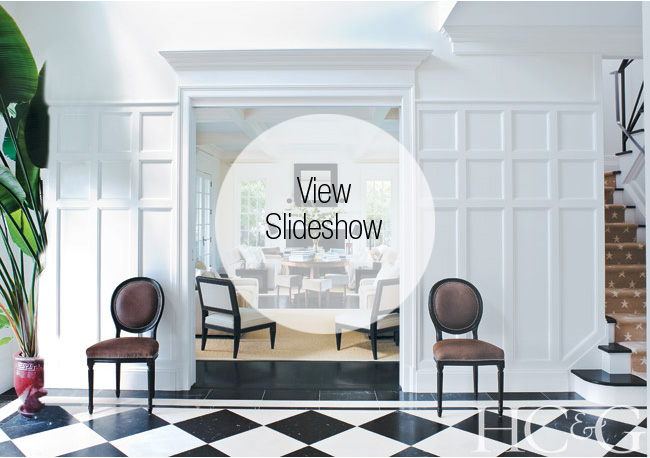 If anyone knows how to put a stamp on something, it’s Ken Wyse. As president of licensing and public relations for PVH, he has helped the Fortune 500 company expand from a $300 million to a $9 billion corporation during his 26-year tenure, working on labels including Calvin Klein, Izod, and Tommy Hilfiger. It’s no surprise, then, that his Greek Revival home in East Hampton was custom designed to suit his particular brand of living: simple yet elegant, with meticulous attention to detail.

Wyse has been coming to the Hamptons since the 1970s and had previously rescued a Greek Revival house from demolition, moving it in 1990 to Buell Lane. Ten years later, he purchased land in Dune Alpin Farm, a former dairy spread that had been converted in the early 1970s to an “enlightened development” of condominiums and building lots, with half of its land set aside as reserve. Wyse’s home, boasting ample patios, a pool, and tranquil views of grazing horses, is his sanctuary,

“I wanted a house that had three things,” says Wyse. “One, that I could be happy in it on my own. Two, that it would be filled with light even on the darkest of days. And three, that I could read a book in every room.” The regal scale of the 11-foot-high ceilings, massive crown moldings, and double-height foyer and grand staircase makes the two-bedroom home appear much larger than its 2,650 square feet, exactly as Wyse had planned. (Dune Alpin Farm’s homeowners’ association
caps the maximum housing square footage at 3,000.) “Simple architecture is crucial,” he adds. “It sets the stage for everything.”

Banking on his skill at identifying talent and bringing together the right cast of characters, Wyse assembled a formidable design team to realize his vision: Tony Greifenstein and Keith Boyce of Greifenstein-Boyce Associates, contractor Richard Swanson, and decorator Larry Laslo, a friend. “I like to think of almost everything I do as conducting an orchestra,” explains Wyse. “It’s how I run my business. I deal with a lot of people, and I get a lot of things to move in an appropriate direction. Hopefully, the consequence is pretty music, something that is well done.”

The layout includes a large living room and a kitchen and dining area separated by a formal entryway with a stunning black-and-white checkerboard floor. The upper level contains a master suite on one end and a guest suite and study on the other. “Each room,” Wyse notes, “is only one room deep, like the great houses of England. There are big rooms with light coming in from two or three sides. A neighbor once told me I’d left the lights on, but it was the setting sun coming through the house, orange and bright.”

While Wyse is clearly fond of neoclassical architecture, it’s a personal proclivity, not something he was ever used to. “I grew up in a gigantic stucco Norman house,” he recounts. “My mother was a glamour queen, and they called my father the Jewish Givenchy. He was a very elegant man, and they were a lovely couple. It was all about glitz and glamour. Here, I just wanted comfortable.”

Wyse was not only hands on but head on in the process. “I used to go to bed every night with the plans next to me,” he says, “and I would dream on them.” A romantic at heart, he laughs as he recounts Boyce’s suggestion to rethink the notion of being alone in the house: “Keith put a double-sink vanity in the master bath—he calls it the optimism sink.” Meanwhile, his mandate to Laslo was “comfortable and contemporary, something that fits in today’s world. I call this house the sport shirt and my New York apartment the dress shirt.”

“We joke that the house has a little Hollywood Regency polish,” says Laslo, who also designed Wyse’s apartments both in Manhattan and West Palm Beach, “but it’s really very simple. Ken has always been very tailored, and the house has very clean lines.” Wyse specified a black and white palette, with creamy walls and five-inch wood plank floors stained dark brown. Laslo softened and enriched the scheme with a wide range of complementary brown tones. “My guests provide the color,” says Wyse.

As in the fashion world, decorative accessories play a major role in defining the overall aesthetic—things like the hand-stitched leather bedside tables in the guest room, the Warhol Campbell Soup print in the kitchen (a spot-on icon for a man who doesn’t cook), and a Hellenistic sculpture on the mantel. “When I put it up, Larry said, ‘It’s the dot of the i; it completes the room,’” Wyse recalls. And then there are the Walter Gropius fixtures in the kitchen that once hung in the entry of the Oklahoma City Civic Center. “Larry said I had to buy them, and I said, ‘If I buy them, my father is going to come down from heaven and murder me because I can’t spend that kind of money.’” But Laslo prevailed, and Wyse, ever the consummate businessman, stayed on mission—even when it came to rooms that most visitors don’t even see. “Who else would have a marble laundry room?” he asks with a smile.

A version of this article appeared in the December 2013 issue of Hamptons Cottages & Gardens with the headline: Hamptons Classic.

A Breathtaking Bridgehampton Modern Overlooking the Ocean Lists for $52M