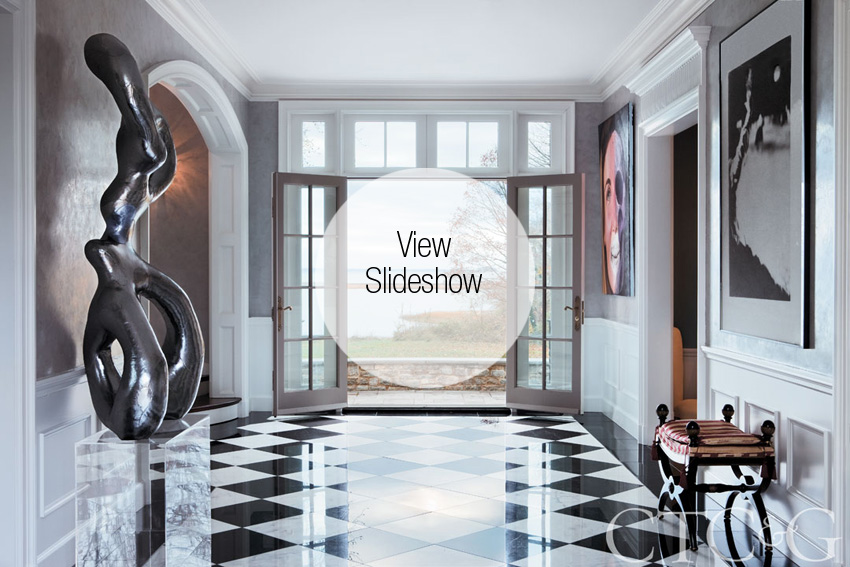 The exterior design of Jennifer and Daniel Gressel’s stately Greenwich home that sits by a postcard slice of Long Island Sound came to Jennifer in a dream. “Literally, I had a dream that the house would be French Normandy in style,” said the former model/artist, art critic/collector, fulltime mom, as she stands in an open arched entryway that offers stunning views of the water beyond.

The Gressels had originally planned for a French-style home on a nearby location. But when a piece of property across from where they planned to build came on the market, the couple jumped at the opportunity.  The problem was that there was a small 1920’s-era English Tudor-style home on the property. Architect Douglas VanderHorn of Hilton-VanderHorn Architects of Greenwich, was tasked with making Jennifer Gressel’s dream come true.

VanderHorn skillfully blended the existing dwelling, which became an attached guest cottage that cannot be accessed from the main house, with a new home by using fieldstone, a steeply pitched slate tile roof, small dormers and decorative filial accents to create, yes, a French Normandy-style appearance from the front.

“When I walked the property,” says VanderHorn, gazing out at the Sound as waterfowl drifted by in a mist-filled sky, “I saw that this view should be the focal point of the home.”

The architect wanted to infuse the entire interior of the home with the water view, which led to a linear design with an emphasis on openness, to allow sunlight and views into the 12,200-square-foot home.

But the design also meant that the home would have a considerable amount of exterior exposure that would be an energy draw. The solution was the incorporation of such elements as spray foam insulation for all exterior and subterranean walls and roofs, energy-efficient windows, LED lighting, geothermal wells, and, most important, an onsite power generation system, the latter effectively taking the home  off the grid.

The idea of installing a cogeneration power system emanated from the mind of Daniel Gressel, an investment banker and economist, who has studied the efficiency of power plants. He hired Blueprint Energy Group of Westport to install the system (one of the first of its kind in the United States) in the cellar. The system runs on natural gas, provides electricity and heat and cooling, serving as its own  back-up generator. It also provides hot water for the family’s pool and hot tubs. The Yanmar Micro  CHP system from Japan cost around $80,000. However, the payback period is relatively short because when the home uses little power, the electric meter runs backward and power is sold to the grid.

“I would say the Gressels spend about $5,200 to power and heat their home [mostly through the  purchase of natural gas],” says Rob Fischetti, principal of Blueprint Energy Group, who is also an artist  and contributed several pieces to Jennifer Gressel’s somewhat eclectic collection of art in her home, “whereas a home this size would usually cost around $20,000 a year to power.”

Matt Matthews of Significant Homes LLC of New Canaan, who served as general contractor for  the project, says, “Not only was it an architectural achievement in its own right, but we also did a  perfect mating of the old and new right down to the size of the aggregate in the mortar and the pattern of the stone. On top of all that, it was green from the standpoint of materials used. What we did with co-generation was groundbreaking.”

Creating a warm and cozy atmosphere was important for the Gressels. To that end, VanderHorn  created an attractive functional lounge area, dining room and kitchen on one side of the home and more formal spaces, i.e., another dining room that overlooks the Sound, the central foyer, library/work room, and a spiral staircase that leads up to the bedrooms, on the other side.

Jennifer worked with friend and design professional Tamara Kilmurray to dress the interior of the home, which is accented with furniture, paintings and sculpture that blend antique and modern: Chagall and Warhol share space with Renaissance works.

“I like to merge the old with the new to create an interesting interior,” says Jennifer.

Indeed, one could say this is the theme of a most interesting and unique home, where modern  technology and construction methods mesh perfectly with a charming 80-year-old cottage and nature  to create what might be called the New Age “Gressel Manor.”

A version of this article appeared in the April 2012 issue of CTC&G (Connecticut Cottages & Gardens) with the headline: Power Play.