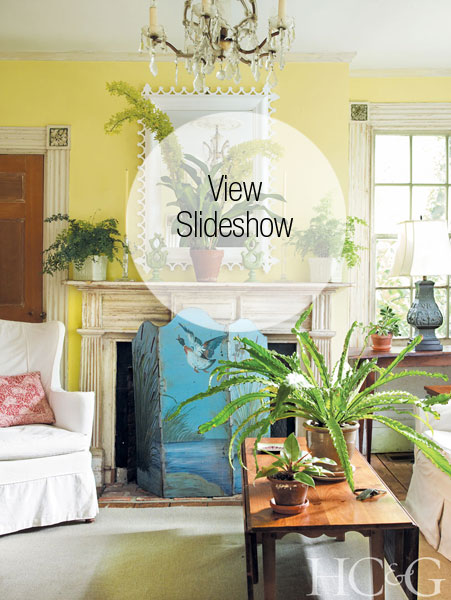 Mark Markheim is the archetype of the  gentleman gardener. “I’m totally into creating tropical gardens in nontropical environments,” he says. “I do them for myself and occasionally for friends, but I don’t do them commercially. My aesthetic is very particular. It’s all about collecting and growing for me, it’s a passion.”

Markheim, whose photo-processing shop in Tribeca was considered one of the best in Manhattan until it closed in 2005, has been tending the lush, jungly grounds of a three-bedroom 1830 Sag Harbor cottage for the past several years. He shares the rental with his friend of 30 years, Philip Saunders, the longtime maître d’ at Raoul’s bistro in SoHo. They met at Raoul’s, which Markheim, like most of New York’s cultural cognoscenti, has frequented for decades.

One of the first things the two friends realized they had in common was a love for plants, but not any old geraniums,  violets, privet, and pine—something more complex and sophisticated, more scientific, scholarly, demanding, and, ultimately, rewarding. For 11 years, the two botanical enthusiasts, both 57, had summered in Bridgehampton, but Markheim’s semi-retirement and desire to spend the full year in the Hamptons put them in the market for a new residence (Saunders still works four days a week at Raoul’s and maintains a studio in the city).

Enter their current landlord, an acquaintance who originally asked Markheim to spruce up the house’s tiny but deep lot. “The place has kind of a Charleston-like, Southern feel to it,” says Markheim. Saunders adds that he was drawn to the “good bones and beautiful lines. It’s an intimate village house.” Serendipitously, the home came pre-decorated in a style that suited their well-honed, colonial-tropical aesthetic. The yellow kitchen walls made the grade, as did the pale green trim on the bathroom windows and the artfully distressed antique doors. “The interior finishes were really well done,” says Markheim. “When I saw the house,  I thought, We can make this work so easily.”

Even the landlord’s furniture, such as a red radio cabinet in the bedroom and a painted screen by the living room fireplace, cohered with the friends’ blend of antique and custom pieces. “Fifty percent of the things in the house are ours, and we re-arranged or put away the rest,” says Saunders. Markheim’s  previous home in Manhattan’s West Village provided easy accent pieces, such as upholstered furniture by architect Mark Zeff, along with a collection of green porcelain and a carved Chinese chest. In the kitchen, a generous shelf displays Markheim’s treasured blue china from San Miguel de Allende, Mexico, and Saunders’s English tea caddies and candy boxes, souvenirs from Queen Elizabeth II’s 1952 coronation—a sweet complement to Her Majesty’s diamond jubilee this summer. “It was an effortless  job to decorate this home,” says Markheim. “Things knew where they wanted to go.”

But what drew them to the property first and foremost was an offer from the owner to pay for all new plants and soil in exchange for landscaping and labor. Since spring 2008 they have been redesigning the garden, initially a standard-issue affair of hostas, hydrangeas, and maple, sycamore, locust, and cherry trees. They expanded the flowerbeds, pruned the trees, and introduced intermediate-sized plants and small ornamental trees, like yellow-flowering magnolia, Japanese maples (green laceleaf and red), and purple-leaved Cotinus coggygria, or  smokebush, whose flower in June looks like a puff of smoke.

Markheim and Saunders have created distinct garden rooms, so that “each has its own look, a different color or design,” says Markheim. The front garden is red and purple, with hibiscus, purple plectranthus, and streptocarpus. The quieter back garden, an oasis of yellow and white, features  caladium and oxalis, and night-blooming moonflowers ramble up the hedge. Jasmine lines the back steps “for a beautiful scent when the breeze blows in the evening,” says Saunders. The new plantings thrive in Sag Harbor’s unique microclimate, which can sustain species exotic to the East Coast, some of them Asian, like abutilon (or Chinese bell flower) and alocasia, and others typically from the South, like cabbage palms. Camellias, says Markheim, “actually bloom here in the winter, sometimes when there’s snow on the ground.”

The plants are stacked green upon green upon green (“Our aesthetic is like a window box, planted thickly and lushly,” says Saunders), with pink highlights in the ‘New Dawn’ climbers on the arbors in the front and back of the house. Markheim and Saunders would like more color in their garden, but so far haven’t had much luck. “We really can’t grow that many flowers,” says Markheim. “We’re limited to what tolerates partial or deep shade. These are  not low-maintenance gardens. We have 250-plus potted plants, requiring hand-watering every day, which can take an hour or two. Right there, that separates the men from the boys.”

A version of this article appeared in the July 15 2012 issue of HC&G (Hamptons Cottages & Gardens) with the headline: Green Goddess.

This article appears in the July-15 2012 issue of HC&G (Hamptons Cottages & Gardens).