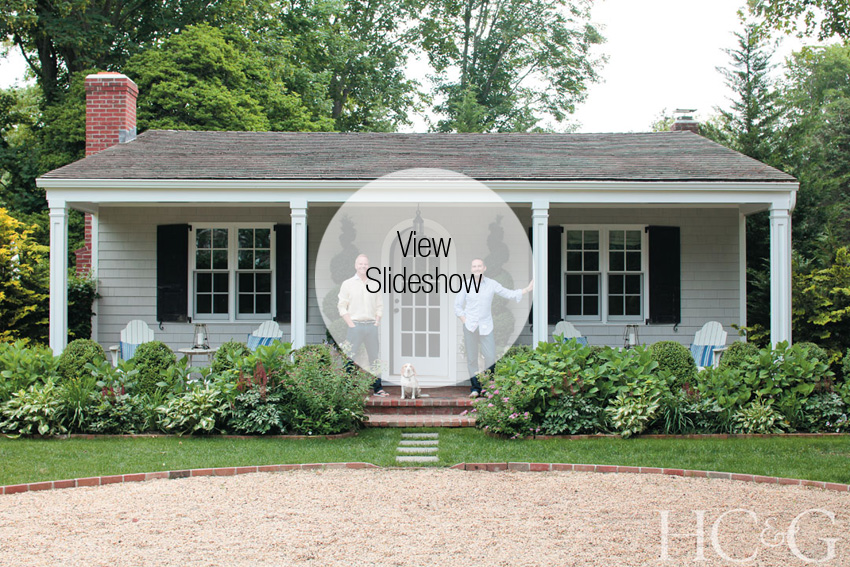 When Manhattanites Steve Markov and Jeff Meleski saw it, they knew they had to have it. Though the nondescript ranch measured only 675 square feet, it was smack-dab in Southampton Village and hidden at the end of a long drive—and came with a combined garage/pool house to boot. Originally the guesthouse to a larger Victorian estate and later parceled off as part of a separate half-acre lot, it was the kind of place that most house hunters would easily dismiss as a diminutive drive-by. But the couple saw pure potential. “We envisioned our own mini Hamptons compound,” says Meleski, “a private little oasis.”

One day in January 2010, around the time Markov, president of a trend-forecasting company, and Meleski, chief growth officer for a social media firm, closed on the house, they met designer Josh Greene, owner of the interior- and graphic-design firm Shagreene. All three were volunteering for God’s Love We Deliver, chopping vegetables and preparing meals for people with debilitating medical conditions. Markov and Greene started to talk about the tiny Southampton property, and somewhere over a stack of cucumber wedges, Greene signed on to decorate it.

“We had renovated many homes over the years,” Markov says, “but we needed Josh to ease us out of our comfort zone just a little bit.” To them, comfort means a healthy dose of Ralph Lauren–style accoutrements, of which there are still plenty in evidence in the new digs. Coincidentally, Greene formerly worked for the design titan, so he was well schooled in the general aesthetic Markov and Meleski gravitated toward.

Initially there was some concern that the couple would be forced to relinquish luxuries that an average-size interior would otherwise allow, but “above all, Steve and Jeff wanted a gracious home,” recounts Greene, “and we all agreed that bigger isn’t always better.” Remarkably, grand statements—the living area’s brass chandelier, the couple’s king-size bed, the his-and-his double bathroom sink—fit right in where allocated, with nary an errant shoehorn in sight. “Nowhere in the house does it feel cramped,” Greene says.

The home remained the same structurally, save for bumped-up ceilings throughout and the removal of several walls to broaden the layout and lend the tight space an unexpected airiness. “We created volume by raising the ceilings— especially by vaulting the portion over the living room—and eased flow with an open floor plan,” Greene explains.

Reclaimed vintage accents, such as the fireplace’s Victorian mantel and pocket doors that close off the bedroom, “give the home authenticity and character,” adds Meleski. (“If everything were purchased new, the place would’ve looked so odd,” says Greene.)

In the kitchen, rather than installing the expected island with space-saving bar stools, Greene chose an antique country-style wooden table with more versatile ladder-back chairs—all the more suited to summer get-togethers that spill out through the double doors onto the lawn. Full-size professional appliances, a deep farmhouse sink and a cleverly concealed washer/dryer make the small kitchen hum with five-starrestaurant efficiency.

As for the decor, Greene expertly layered color, pattern and texture in a quintessential Hamptons palette, ranging from varying shades of blue (navy, turquoise, robin’s egg) to washed-out whites (on bedding and handpainted kitchen cabinetry) and sandy browns (on floors and furniture). Metal finishes on all fixtures—from brass to chrome to oil-rubbed bronze—add shimmery accents throughout.

In turning an unexceptional guesthouse into a well-appointed weekend cottage, “Josh definitely maximized every square inch of space,” says Markov. “When we show up for the weekend,” Meleski adds, “we turn the key and enter Shangri-la.”

A version of this article appeared in the August 1 2011 issue of HC&G (Hamptons Cottages & Gardens) with the headline: Small Wonder.