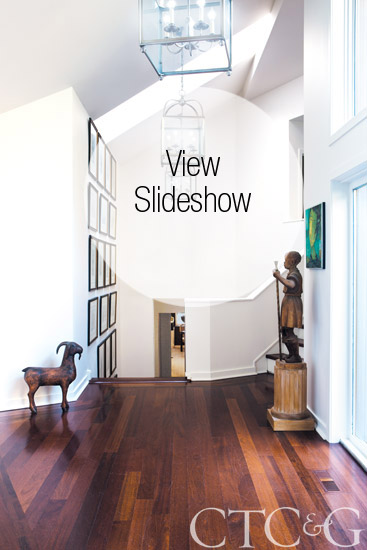 Most people seek to avoid high drama in life. Michael Tubis, an antiques dealer and interior designer, and his partner, Dr. Stuart Bentley, encourage it. “There’s drama to be found in every room, and we work to foster that,” says Tubis of their 9,000-square-foot contemporary house situated on a private road in Greenwich. “Everyone who comes to one of our huge parties says the same thing upon walking inside, ‘Wow.’ Even I can’t stop saying it every time I come back home.”

Tubis admits to being a “price snob” when it comes to the antiques that fill the house, an ever-evolving collection of modern and midcentury pieces along with European Continental finds. But for him, the lower the price of something, the more it appeals to him. “Every antique in here comes from a tag sale and costs about two dollars—or not much more than that.” In his business, Carol Master Antiques, which Tubis has owned in Tarrytown, NY, for 21 years, he often works as a supplier to many high-end dealers in the tri-state region. “I’ll sell them an item in its rougher, more natural state, and they, in turn, do the reupholstering and polishing or whatever is needed.”

There is no corner of the expansive, multilevel house in which antiques—and a touch of whimsy—do not make a dramatic appearance. After negotiating a series of landings to the living room, items come into high relief, including a pair of Greek key–motif brass chairs (one of which Tubis picked up for $30 at a Norwalk flea market). He has them positioned at a 1970s coffee table with a beveled-glass top, along with a pair of French oversized brown and white chairs. Meanwhile, a circa 1950 Regency-style breakfront (bought at auction for $225) displays an array of ceramic vases. While at first they appear to have an ancient provenance, Tubis explains that they date from the 1930s and were used by mail-order florists.

Another benefit of filling a house with coveted, but not expensive antiques, is that their dog, David, for whom the couple hosted a “bark mitzvah” on his thirteenth birthday, can roam freely without any worries. Part of the drama that Tubis fosters throughout is about the mixing of eras of antiques and furnishings, as well as juxtaposing the serious with the whimsical. One main staircase wall, for instance, features a salon-style hanging of 19th-century classical prints of figures, while an adjacent wall is hung with pop-art paintings declaring “Bam!”, “Pow!” and “Zap!” “I like to throw some humor into the house,” explains Tubis.

Another example of his penchant for surprise is in the dining room. There, an exuberant bronze chandelier depicting people holding hands is suspended above an old rosewood conference table.

One of the most arresting rooms in the house, though, is a diminutive internal courtyard furnished with a round plastic table that lights up from within surrounded by curved, orange midcentury modern chairs from Italy. The room is dramatically backdropped by a natural outcropping that creates a grotto-like feel in the space.

The bright and airy kitchen features a large marble-topped, blond-wood island set with Bertoia stools. “Much of the kitchen was in place when we moved in four years ago,” says Tubis, “but we changed the hardware and countertops to make it look more modern and fresh.” An eating nook opposite the island is backed by a vigorously textured flagstone wall. Inexpensive sculptural utensils from Pier 1 Imports adorn the wall. “I love mixing the high end with the low, as long as it all looks great together,” notes Tubis.

“I spend every day on the road shopping for antiques for my business,” says Tubis. “But I know I love everything we own in this house, because I never think about selling anything. The things I truly love, I keep, and live with.”

A version of this article appeared in the September 2014 issue of Connecticut Cottages & Gardens with the headline: Dramatic Entrance.