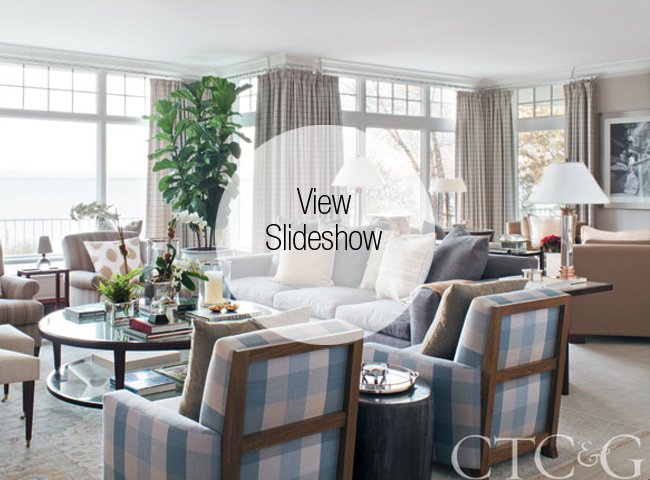 It’s safe to say that if you have to hand your life over to anyone, Foley and Cox will not disappoint. The design partners would say they don’t have a signature style, exactly, but if you look closely at any of their projects, you’ll see a common thread: sumptuous, elegant and comfortable interiors. There’s an underlying tone of quiet sophistication, but each project is uniquely its own. “We work toward creating a sense of timelessness. We don’t believe interiors should be trendy,” says Michael. “Most importantly,” he adds, “we try to make it personal. We get to know how our clients live and what they love.”

For clients who bought a Greenwich property intent on transforming it into their dream home, the designers had no trouble getting to know their tastes and personalities. This was the designers’ fourth collaboration with the couple. In this case, the challenge wasn’t getting to know them, but rather transforming their waterfront property into the house they always wanted. They brought in architect Cormac Byrne, with Jones Byrne Margeotes Partners, to gut the interior and modernize the exterior by changing the color palette to a more natural shingle color and reconfiguring the entrance. The original interior, with awkward flow and a lack of windows, seemed to forget the house was ideally situated to take in the spectacular water views. “Most of the work was interior,” says Byrne. “We wanted to open up the floor plan and make it more graceful and add windows to maximize the views on all three levels—even the basement has a water view.” Among other things, Byrne gutted the kitchen and moved the original staircase (all ornament and brass), replacing it with a more classic shingle-style version, so the entrance became less intrusive and captured the view. The main living space, once two stories, was brought down to one creating a much more intimate feel.

Foley and Cox approached the interiors in a similar vein. “The challenge was to make the spaces feel more intimate,” says Cox. Of the scaled down living room, he says, “It’s still a very grand room with big windows and substantial proportions, but we wanted it to feel homey, welcoming and comfortable.” Once the key elements were decided—the designers worked with the contractor until the exact tone of the wood floors was correct, and with the painters on that perfect shade of warm white—Foley and Cox layered soft, muted blues, greens and creams. “We took all the colors from the patterned rug and put them in different pieces of furniture. It’s a lot of pattern and texture, but it’s subtle so it all softly blends together creating an inviting envelope,” says Foley. They upped the cozy factor by carving out three living spaces. “It’s one room with a different feeling in each area, but it’s still cohesive,” says Cox.

A sunroom off the library is the one spot the designers and Byrne left alone. “You really feel the view and the power of the landscape in this room,” says Cox. It’s also a little more feminine and casual: Floral embroidered pillows mix smartly with slipper chairs piped in an unexpected leather. And it houses some of the wife’s collection of English biscuit jars. “This was a new house, but they wanted it to feel familiar,” says Foley. “We always like to unearth things and use them in different ways. The wife was pleasantly surprised to see their collections presented in unexpected ways in their dream house.” It’s these seemingly small touches that turn a Foley and Cox interior into a highly personal experience. “We base a project on the client’s lifestyle—how they live and what they love,” says Cox. “It’s very emotional and very gratifying.”

A version of this article appeared in the April 2015 issue of Connecticut Cottages & Gardens with the headline: Personal Best.