Tour a Greenwich Georgian with Vintage Charm and Modern Luxury 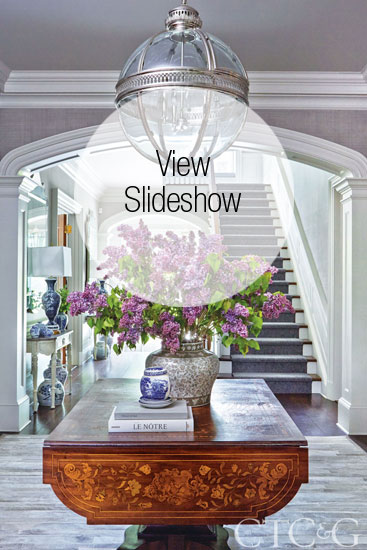 The renovation of the house was nearly complete when interior designer Amy Aidinis Hirsch received the ultimate compliment from her client. Responding to the softly silvered David Bonk wallcovering that wraps the entrance and runs through the center hall, the homeowner said, “It feels like a hug when I walk through the door.” Those simple words left Hirsch completely validated.

Ten months prior, the couple had arrived from the U.K. with their four children and goldendoodle. They landed in Greenwich because the town had all the right criteria for work, school and play. The newcomers soon found a 12,000-square-foot Georgian-style brick house with English charm and noble curb appeal. The floor plan, however, was awkward and did not reflect how they imagined living in their first American digs.

They wanted a high-functioning home specifically tailored to their family that had a formal ease, looked relevant rather than trendy, and felt calm and cozy. They wanted to incorporate pieces they brought from London, and also hunt for and gather lovely new things. The woman of the house wanted to participate actively in the redesign but recognized a need for expert help. Their Realtor promptly introduced them to Hirsch.

Beyond being the consummate custom curator, Hirsch has a deep understanding of the construction process. “I like being connected from the ground up,” says Hirsch, daughter of a plumbing/heating contractor. As his sidekick, she stepped inside the shells of top-caliber homes, perused intricate plans and was awed by the tradesmen who built dreams with their hands.

Construction expert Julio DiBiase, a frequent collaborator of Hirsch’s, inspired that similar feeling, and she was thrilled when he was hired as general contractor. Their trusting rapport gave the owners an added dose of confidence. “We are a well-oiled team,” says Hirsch, “We read each other’s minds.”

DiBiase’s army remodeled as every inch was transformed. The master suite and kitchen/family room areas underwent total reconfiguration. DiBiase recalls, “There was a general sense of dysfunction, plus they felt cramped and, of course, needed an aesthetic update.” Among the thoughtful new details were 39-inch counters to accommodate the couple’s tall height and a revamped mudroom flaunting personalized cupboards for each child’s belongings.

As for the decoration, Hirsch began the process with color inspiration, choosing a strong and soothing inky blue as muse. This alluring shade wafts throughout the house sparingly but with intention, on sofas and stairs, and even appears on the shutters outside. Offset by a trove of ethereal grays and soft greens and the sparkle of mirror, crystal and metallic surfaces, this somber hue never feels overbearing.

While Hirsch played off the innate formality of the architecture, and called upon shapes and motifs from centuries ago, she unquestionably created a fashion-forward home, counterbalancing Old World charm with contemporary textiles, finishes and art. Comfort was never sacrificed even in the elegant living room where plush seating provides abundant space for music practice and game playing. Hirsch kept the mood intimate. “Well-tailored drapes are just like an embrace,” she says.

The project reaped reward for all. The homeowners have an exquisite dwelling where even the children gush, “I love our house” almost daily. DiBiase’s firm completed the basement remodel and erected a pool house. Hirsch stretched her skill and took risks, like the asymmetric mirror arrangement on the grasscloth accent wall that fortunately ended well. She also made a new friend with whom she can take another spin at any one of Stamford’s fab antique centers.

A version of this article appeared in the January 2016 issue of Connecticut Cottages & Gardens with the headline: Gorgeous Georgian.

This article appears in the January 2016 issue of CTC&G (Connecticut Cottages & Gardens).