Tour a Greenwich Home Filled with Colors and Patterns 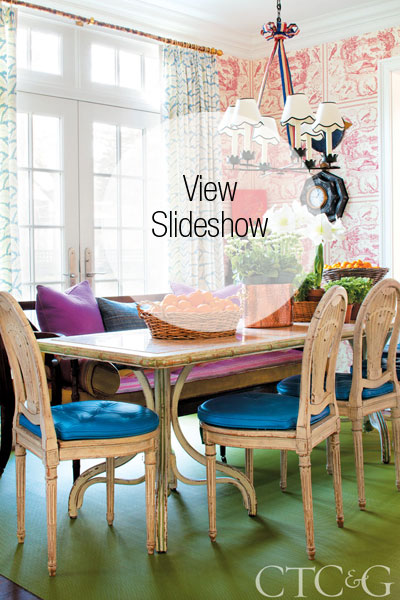 After years of residing Manhattan’s Upper East Side, this young family was seeking an anti-urban life and look. “We bought this house because we wanted a place where we would know our neighbors and could ride bikes with our kids,” says the homeowner about their new shingle-style home on a tree-lined Greenwich street. The look they sought, however, was anything but classic Connecticut. “No beige, hunter green or burgundy,” insisted the homeowner, who wanted the interiors to have the charm and warmth of an older home but with a strong dose of unpredictability to keep things interesting. “Definitely not a catalog feel,” she adds.

Searching for a designer who would “push me to take risks,” the mother of two found her match with interior designer Jeffrey Bilhuber of Bilhuber and Associates. Known for his fearless mixing of bold hues and strong patterns, Bilhuber was immediately delighted by his client’s preference for “exuberant saturated colors and fabrics.”

“She wanted a slightly Bohemian look and was very encouraging about using everything together,” says the designer, who counts Vogue editor Anna Wintour and David and Iman Bowie among his trendsetting clients. “She was ready to take chances.”

To initiate the process, the homeowner spent several hours in Bilhuber’s extensive resource library separating fabric swatches into “love this,” “hate that” piles. “After the client edits, it becomes our responsibility to say this would be better as a drape or a pillow,” he explains. “I influence the decisions, but in the end the home is distinctly theirs.”

But how an amethyst and lavender print sofa, blue floral drapes, a red damask table cover skirted with a deep fringe, and a pair of reproduction chairs upholstered in a shade akin to pale pumpkin (the unlikely assemblage comprises one end of the living room) all work together is testimony to Bilhuber’s talent, instincts and his philosophy that more really is better. “To put pattern and color together successfully, you need multiples and repetition,” he says. “If you have just one big floral print, that’s all you see, but distributing and repeating patterns neutralizes them.

Bilhuber also unabashedly juxtaposes traditional statements with unexpected contemporary flourishes like the striped family room draperies trimmed with a geometric edge or the pink and white aviary wallpaper in the entry balanced with a painted chevron pattern on the wood floor. According to the designer, the latter was inspired by an early Parish-Hadley project, where the floor was stained two shades of brown. “Instead of brown on brown, we followed the pattern in the wood with a light cream and that dark Essex green seen all over Connecticut,” he says about his wink to the local vernacular.

Ever mindful of the family emphasis, the designer selected materials to stand up to the demands of life with six- and seven-year-olds. “The fabrics are beautiful, but everything is printed on heavy cotton,” says Bilhuber, who chose equally durable woven matting for the living room floor and a green vinyl rug for under the breakfast-nook table.

Despite the home’s generous 4,600 square feet, the rooms are intimate and scaled, and Bilhuber claims it’s the infusion of competing patterns and design styles that makes each space unique, yet welcoming. “There’s an ease to these rooms that makes them comfortable for two or twenty, but it’s personality that provides the connective tissue,” he says.

To fuel the personality angle and further mitigate the generic tone of the architecture, Bilhuber invented a narrative for his client’s city to country migration that he likened to the Duchess of Devonshire’s recent move from Chatsworth House to the vicarage where, she had to pare down considerably. “Like the duchess, this family left their big city home for a more edited and manageable life in the country,” he explains. “But this house is now about their story; these rooms represent their ideas and goals, and it’s a stage from which they can continue to grow and evolve.”

A version of this article appeared in the December 2012 issue of CTC&G (Connecticut Cottages & Gardens) with the headline: Suburban Outfitters.