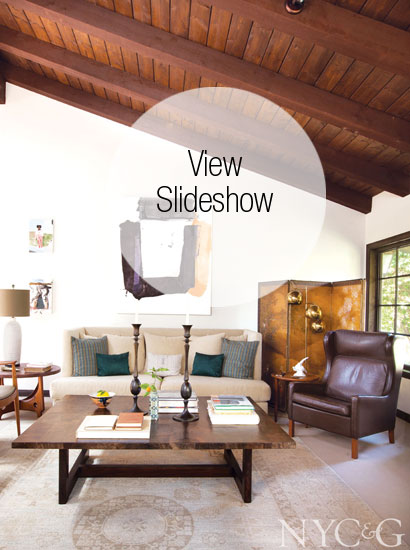 It's hard to believe that parts of Southern California remain undiscovered, but not too far from Los Angeles lies a stretch of land so picturesque and remote that it seems stuck in the 1940s of Norman Rockwell (although, truth be told, there’s a Starbucks and a mall). Everybody knows elegant Santa Barbara and yuppie-hippie Ojai, but even most die-hard Angelenos have never heard of Heritage Valley—and it’s closer to downtown Los Angeles, about an hour’s drive against traffic. Cushioned by Los Padres National Forest to the north and the San Fernando and Simi valleys to the south, the largely agricultural region (avocados and oranges grow in abundance, at least in non-drought years) has developed its own brand of cachet, given its off-the-radar status.

It was just the sort of place Sarah Walker and Robert Gunderman were looking for when they started house-hunting five years ago. Walker, an interior designer who is the principal of Sarah Walker Design Associates, and Gunderman, a co-owner of ACME., a contemporary art gallery located a stone’s throw from the Los Angeles County Museum of Art, had previously been living in the Hollywood Hills. Nothing to sniff at, Walker admits, but “your nearest neighbor became just a bit too near. Although it has a lot to offer, we wanted to get out, to someplace rural.”

Gunderman is among the few Californians who knew Heritage Valley, since he had grown up nearby. While looking in the area, the couple stumbled on a house that Gunderman had been to previously, having attended a party there once with his parents. “It was so beautiful, and we could really see ourselves living here,” recalls Walker. The catch: It was filthy. There were cobwebs and dead plants everywhere, and more base substances best left unspoken of. It was so bad, a hazmat crew was called in, since the couple had decided they wanted it so badly. “It was a weird obsession. We just knew this was where we were supposed to be.”

Designed in the style of a Mexican hacienda by Chris Choate, a partner at Cliff May, the architectural firm credited with developing the postwar suburban dream known as the California ranch, the house was still occupied, although it had just gone into foreclosure. But with the nearest neighbor a mile away, Walker and Gunderman knew they had found their piece of heaven. “Nothing was going to get in our way,” says Walker, noting that their closest neighbors now include an occasional mountain lion and condors soaring overhead from a nearby sanctuary. They named the new home Rancho del Sapo, for the many toads and frogs that inhabit the property.

Walker grew up in the mountains of North Carolina and always harbored a hankering for a similarly remote-but-not-too-far place to live, but she’s no country bumpkin. She was a New Yorker for 15 years before moving west, leading a self-described crazy life as a restaurant owner, nightclub manager, and wife of a record producer. When the marriage dissolved, she found herself running a special-events business, but falling short of finding her true passion. “I had to figure it out,” she says, describing the interior design career that happened almost by accident. “I wasn’t actively pursuing it, but friends kept calling with projects and asking for my opinion.”

At 4,200 square feet, the couple’s four-bedroom, three-bath home was sound structurally, but needed updating: Orange-tinted woodwork got a warm stain of dark brown, and while there are some nods to “hacienda-style decor,” such as Saltillo-tile floors and numerous fireplaces, the couple “could never connect with that look entirely,” says Walker, who has decorated with mid-20th-century pieces, including chairs by Hans Wegner and Don Shoemaker.

Not surprisingly, given Gunderman’s vocation, the home is filled with great art, such as works by Tomory Dodge and Daniel Cummings, both of whom he represents, and Martin Kersels and John Sonsini. Gunderman is also at work on an entirely different collection: avocados. The 15-acre property originally included 100 orange, grapefruit, and avocado trees, and Gunderman recently planted 400 more of the latter, with the goal of Rancho del Sapo becoming a working farm. Heritage Valley has always been rural country and is the birthplace of the Valencia orange, so “we were the odd men out in not having an agricultural property,” says Walker. “Everyone kept asking us when we were going to start planting! The absolute best part of being here is all about the outdoors. At the end of every day, we end up sitting outside, huddling around the fireplace.”

A version of this article appeared in the December/January 2016 issue of New York Cottages & Gardens with the headline: California Dreamin'.