In her own apartment, decorator Bella Mancini practices what she preaches. 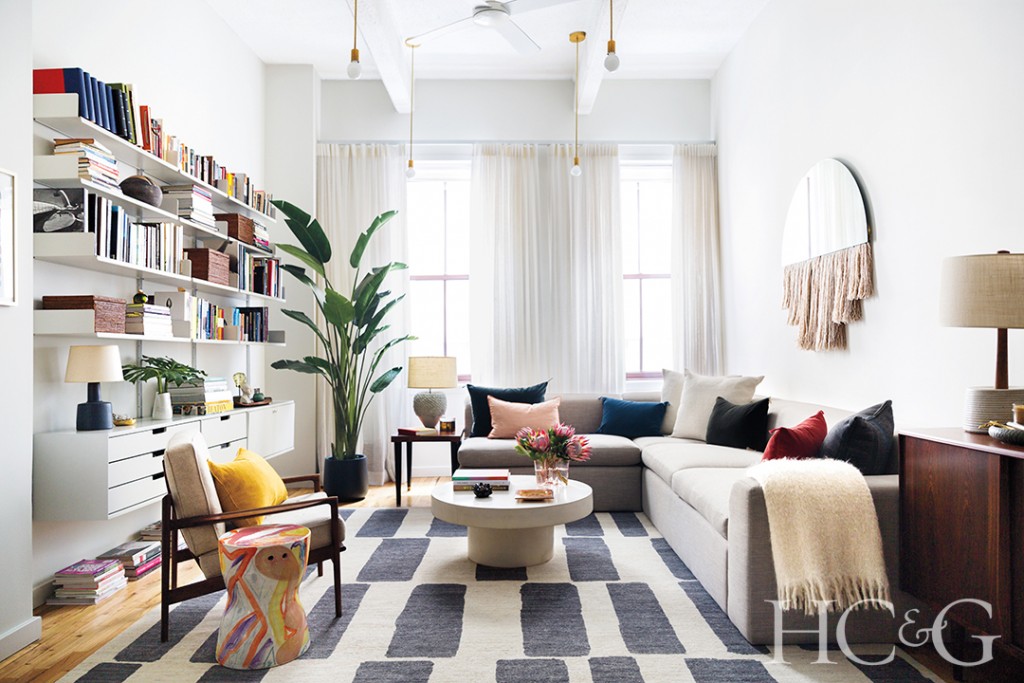 If there’s something especially light and airy-looking about the Dumbo flat pictured in this article, chalk it up to the easy-breezy California-girl roots of homeowner and interior designer Bella Zakarian Mancini, who grew up near San Diego and studied clothing and textiles in San Francisco before relocating to New York City in the mid-1990s. Quickly disenchanted with the business of fashion, she recalls, “One day, very abruptly, I quit my job. When you’re 25 years old, you think your life is over, so I met a friend for drinks and we began talking about other things I was interested in.” That friend introduced her to designer Ellen Hamilton, with whom Mancini worked for two years before going out on her own and launching her eponymous decorating firm in 2000.

Mancini’s style is a fresh take on hippie chic, a heady combo of “wood, vintage finds, lots of ceramics, and things that look homemade,” she says. “A room should tell a story, and not seem like it was done all at once.” At home, Mancini and her husband, Jeff, who trained as an architect and works in digital marketing, also layer in “random bits from our travels.” She encourages clients to do the same because “it adds soul—although my apartment is super-personal and feels way less perfect and curated than perhaps some of my firm’s work does.”

Longtime Dumbo residents, the couple praise the neighborhood’s “incredible sense of community,” Mancini says. “People don’t move much, so our kids have been raised alongside the same kids since preschool, and now they’re all in middle school together. It’s a very tight-knit and wonderful place to live.” The designer and her husband had long been enchanted with the 1893 Romanesque Revival waterfront building where they reside today, although at first sight, Mancini recounts, their apartment was “really the ugliest I had ever seen.” The loft-like 1,840 square feet helped them overlook the every-wall-a-different-color decor, the lack of natural light, and the previous owner’s hanging sword collection. “There was really good energy, and we liked the layout.”

A renovation ensued, starting with most walls being painted white, along with an overhaul of the kitchen and the two bathrooms. A TV room became a third bedroom, in order to accommodate their growing family (son Paolo is now 10 and his sister, Paloma, is eight). “My husband and I both really love minimal spaces,” adds Mancini, “even though this apartment is not as minimal as we probably would have liked.” But it is fun, and also quirky, given its location in the former Eagle Warehouse, named for a storied 19th-century newspaper, the Brooklyn Eagle, that was once edited on the premises. 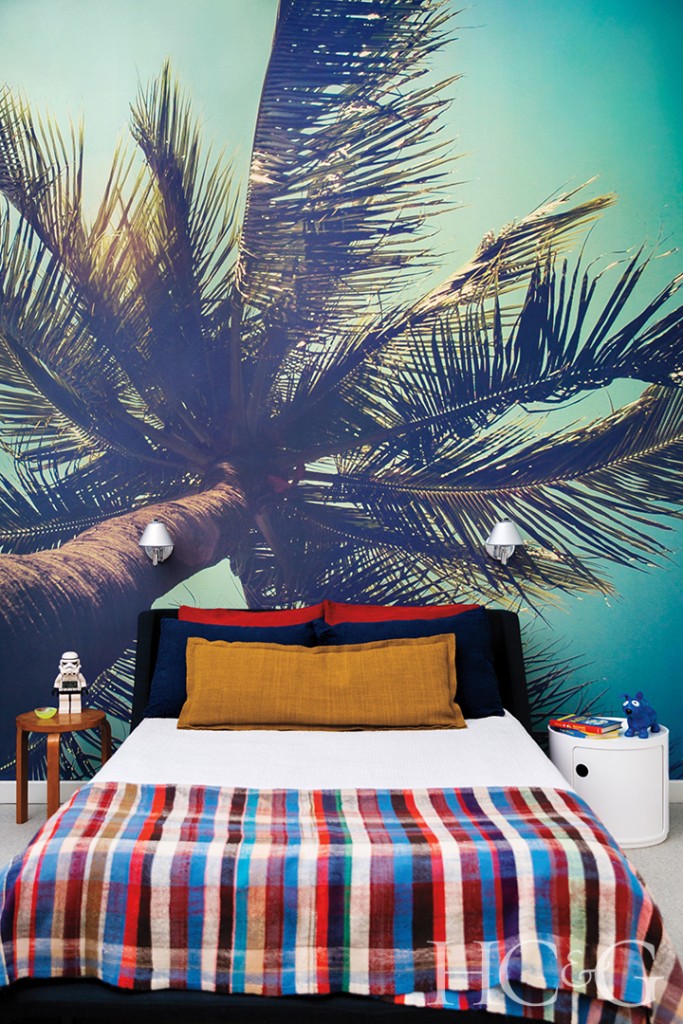 In Paolo’s bedroom, for example, a giant palm-tree-motif mural covers a wall “because he doesn’t have a window in his room, but also because we love California, the beach, and Mexico—and my son loves to surf and skate, so it felt very ‘him.’” Paloma’s bedroom, meanwhile, is highlighted by splashy Josef Frank florals on the headboard and curtain—a modern update on Mancini’s own childhood bedroom, she says, “where chintz draperies matched the bedskirt.” 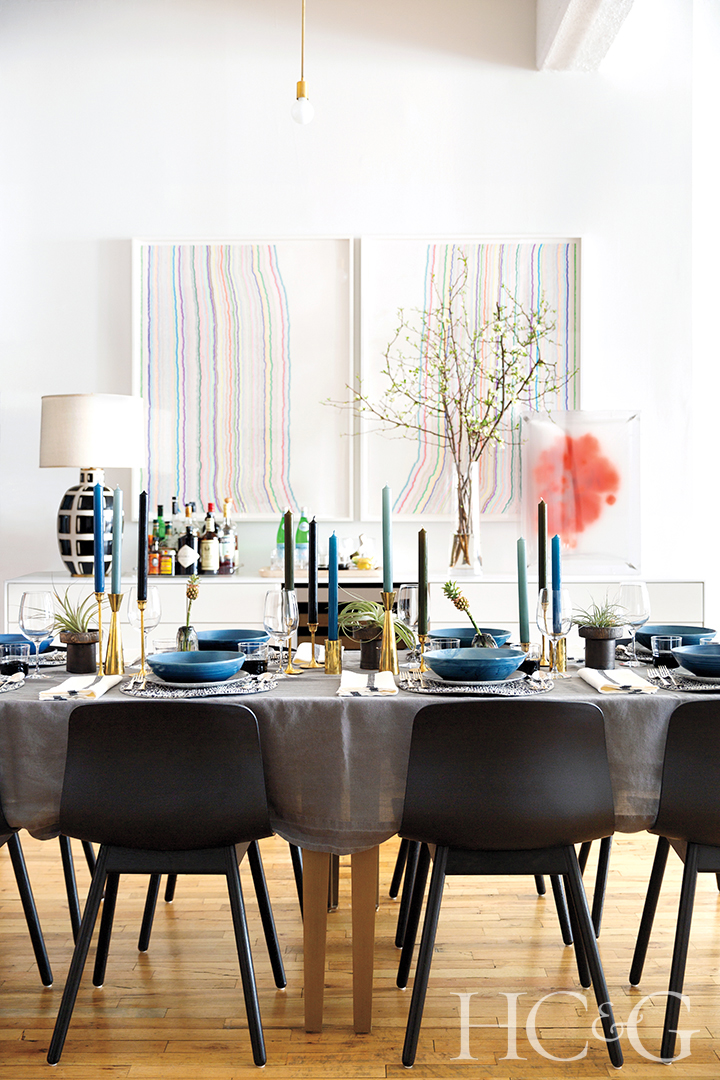 Although it’s “not our forever apartment,” Mancini adds, the couple have made admirable improvements, most on a budget. The Ikea kitchen has been upgraded with custom open shelving, high-end appliances, and a “good” hood and faucet and tile. In place of the “ginormous” dining table Mancini initially desired, she simply pushed together two marble-topped rectangles from CB2 instead. “It’s stop-gap until our kids are bigger and we’re in a different home.” The chairs are from Hay, the contemporary Scandinavian brand, and can be “easily wiped off because they’re plastic.”

On the more splurge-y end, there’s a Vitsœ shelving unit by Dieter Rams, David Weeks Studio sconces, a Jacques Adnet mirror, and art—lots of it. A Rauschenberg collage print, which the Mancinis gifted to each other for their first, “paper” anniversary, hangs in the living room. A side table by artist Reinaldo Sanguino is a favorite, as is a graphic area rug by textile master Joseph Carini. “He’s somebody I just adore as a human being,” Mancini says of Carini, “and his brand has such integrity. On any level, it’s always important to surround yourself with furnishings that have a rich design sensibility and history.”

The print version of this article appeared with the headline: Casa Bella.