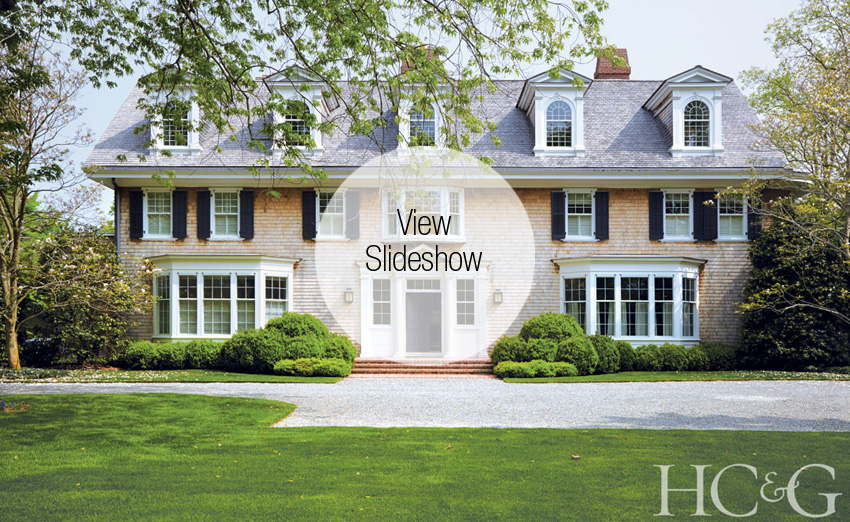 Despite the preponderance of McMansions across the Hamptons, certain homes still exist that evoke the glories of an earlier age, when millionaire industrialists from the city erected summer cottages of grand proportions. Westlawn, in Southampton’s estate section, is one of those houses.

Built by architect F. Burrall Hoffman around 1900, the structure defines stately: A circular drive leads to a pilastered and pedimented entrance flanked by two large bay windows, with another atop the door and five dormers lining the third story above. Ivy once covered most of the south-facing façade, but it was removed for Westlawn’s new owners, a couple and their three young children, who adored their new residence but needed to bring it up to date.

The directive: Fashion a place that would endure—not only for them, but for generations to follow—with enough room for family and friends to enjoy the pleasures of summer, such as biking to the beach, swimming in the pool, and entertaining deep into the night. Some things about the Hamptons never change.

To realize their dream, they employed the talents of interior designer Franklin Salasky, of Manhattan-based B Five Studio, and architecture firm Ferguson & Shamamian. Salasky had decorated the clients’ apartment in the city and describes working on Westlawn as an ideal project. “To experience something like this is very special,” he says, “an opportunity that doesn’t come around every day.” The 14-room house—including five bedrooms, all with en suite baths—clocks in at 10,000 square feet and has all the trappings of an estate of this size: glorious specimen trees, a three-bedroom guesthouse, a tennis court, a pool, and expansive grounds.

The homeowners wanted to give a modern polish to the classic structure and restore it with care. They had a short list of architects, but Salasky convinced them to go directly to Ferguson & Shamamian, a company known for its masterful work on traditional homes. “Our clients asked us not to erase the age,” recalls principal Mark Ferguson. “They think of themselves as stewards of this home and simply a part of a historic continuum. Basically, they wanted to change everything, but essentially change nothing.”

Although the house is not landmarked, Ferguson & Shamamian still needed permission from Southampton Town’s Architectural Review Board for the somewhat extensive renovations. The north end of the east wing—where there are two kitchens and ample room for dining and entertaining—was built anew, with most of the original flooring restored or replaced. On the opposite side of the house, a brand-new library was constructed adjacent to the generously sized living room. But the biggest obstacle of all was reorienting the driveway, which was situated too close to the neighboring property. To do so, the architects lifted the entire house and moved it 12 feet for more clearance, keeping in mind the estate’s arboretum-quality trees, particularly the allée that’s part of the home’s initial gardens on the expansive west lawn. Viewed directly from the living room, this part of the sumptuous park-like grounds gives the house its name.

“Ultimately, our challenge was to make considerable upgrades to the house while ensuring that it would seem like it has always been this way,” Ferguson says. “We understood that the owners admired the house tremendously, but didn’t want to live in a museum. The most important part was retaining the spirit of Westlawn’s original design, and I think we were true to that. The home has stature now, but still a rustic quality to it.”

As for the decor, Salasky also took cues from the house’s fine bones, maintaining a classic, yet modern aesthetic throughout. Soft, minimalist furnishings enhance, rather than upstage, the architecture. “I’m already familiar with how my clients live,” the designer says, “so I was able to give a certain flavor to the house that I knew they’d be comfortable with.” Case in point: rattan seating pieces in the living room—an unexpected choice for a house this grand, but one that’s entirely appropriate for a summer cottage so close to the beach.

The color palette is just as agreeable, with abundant blue and white florals throughout, cheery yellow in the front hall, a dazzling, digitally printed smoky-blue vinyl wall covering in the dining room, and a dusky-blue paint in the library, which contrasts nicely with a Swedish area rug in yellow and tomato red. “When you work on a house of this scale,” Salasky says, “the rooms almost become like chapters in a novel. There are subplots, and the story continues from room to room, but eventually there’s a happy ending.”

A version of this article appeared in the July 15, 2016 issue of HC&G (Hamptons Cottages & Gardens) with the headline: Village Beauty.