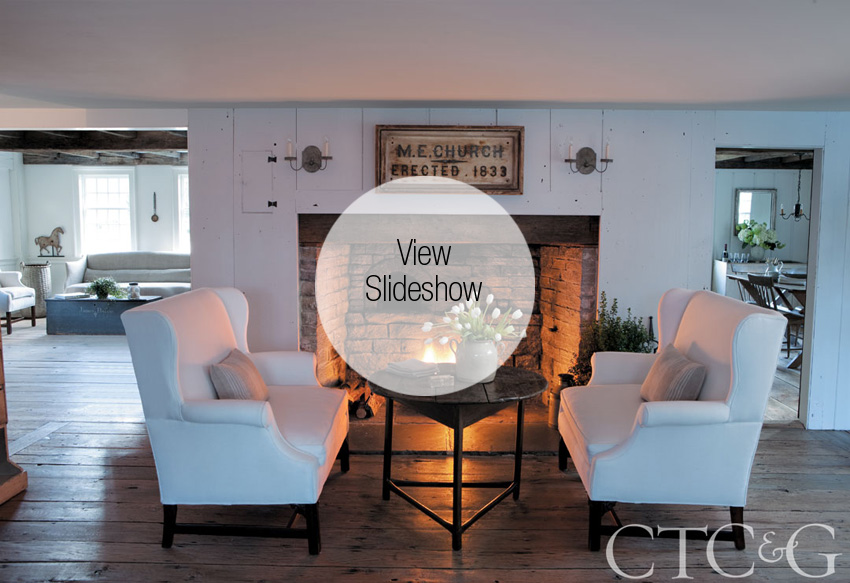 A handful of antique homes sit on the Killingworth Commons, a quiet grassy acreage in the town whose “sunny farms” poet Henry Wadsworth Longfellow immortalized in the 1863 poem The Birds of Killingworth. Nancy Fishelson’s Killingworth sunny farm—well, an 18th-century Cape, to be exact—predates Longfellow by a century or so. Its location, however, benefits from modern-day hindsight: Unlike the typical antique (often located at the road’s edge), the period homes on the Killingworth Commons were relocated to the spot several decades ago and are accessed via private back roads, creating a time traveler’s view from Fishelson’s windows, all grassy Commons and late 17th- and 18th-century houses. “If you look outside, you think at some point you’re going to see Hester Prynne walk across the field,” says Fishelson.

The problem? Pre-renovation, Ms. Prynne and her scarlet letter might have fit in well on the inside of the house, too. “It was a very small Cape—very, very cramped,” recalls Fishelson. “The ceilings were all of seven feet,  and I am massively claustrophobic.” Claustrophobia can be a persistent affliction for antique-home lovers like Fishelson, an architectural designer renowned for her renovation and design of period country houses. “Most of the time,” Fishelson says of her projects, “there are corridors, small rooms, low framing, low openings. And I like a lot of light and sun.” In Killingworth, out came the drywall in the ceiling, exposing original textured beams and taking cramped rooms to new airy heights. Visual flow was created by opening up walls between rooms—even in the bathroom. Fishelson’s master suite is one great room, with the huge, Waterworks-outfitted bathroom separated from the bedroom by the glass panes of carriage doors.  “I like to see through spaces,” says Fishelson. “If there are walls and small  doorways, and I can’t see through the space, it just closes my eye down.”

Washing the walls of the house in a custom Benjamin Moore white brought even more light in, especially in the wood-paneled dining room.  “The moment I painted those walls, the room went five times lighter. It is mindboggling what a little white paint will do,” says Fishelson, whose emphasis on a muted palette illuminated the home without extinguishing  its connection with its history. It’s a Fishelson signature: “I try to leave as much of the integrity of the house as possible: You can take the good bones and the good structure of the house and then find a way to bring it to the way we live now,” she says.

Honoring the home’s history was a priority even while expanding its square footage. She repurposed the property’s more recently built barn as that open master suite and connected the two structures with a breezeway, now home to Fishelson’s office, which overlooks privet-edged formal English gardens. This added about 1,000 square feet—and a second extension expanded the kitchen—but the antique exterior of the house barely changed. “When you are looking at it from the front, it still looks like a small Cape!” Fishelson says.

Inside, the emphasis on maintaining period integrity continued. Original floors in the house were hand scraped and waxed: “Not sanded,” says Fishelson, “because you lose the undulation.” Vermont’s Authentic Designs handcrafted special reproductions of period lighting fixtures. And carefully chosen pieces from Fishelson’s collection of antiques bolstered the period vibe while reinforcing the clean, contemporary sensibility injected by Fishelson’s muted color scheme. “The kind of antiques I collect are mostly lighter, painted pieces. It makes for a more contemporary spin on very period pieces,” says Fishelson, whose selections for her Killingworth home include “things that are textured and have an architectural look, like a period 18th-century couch in the living room. But because it’s all neutrals, it contemporizes the traditional antique style.”

The result is a home with both a serious allegiance to its past and a crisp, fresh feel that is distinctly 21st-century. It’s tangible proof that throughout the centuries, there are some pleasures that never go out of style. “I love lighting a fire in the keeping room,” says Fishelson. “I just sit at that little cricket table and eat, and it’s really kind of wonderful.”

A version of this article appeared in the March 2012 issue of CTC&G (Connecticut Cottages & Gardens) with the headline: Window on History.