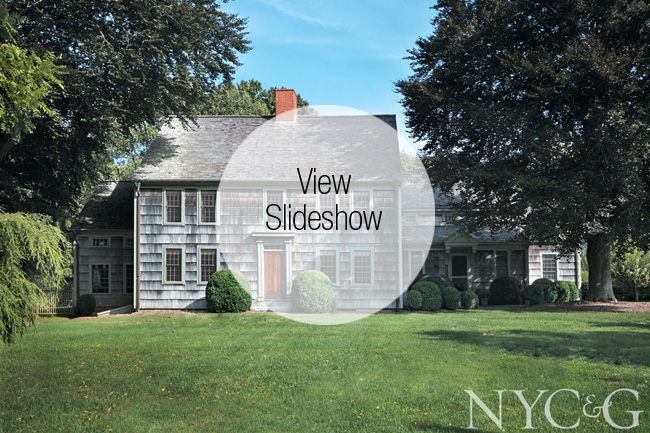 In most cases, the notion of owning a historic home in a beach community typically borders on the oxymoronic. An older house often means creaky floorboards, drafty windows, and endless repairs, whereas the prevailing beach-getaway ideal is one of spartan interiors and sparkling floors that need only an occasional sweep to get rid of tracked-in sand.

But in Southampton Village, which is nearly 400 years old as well as the oldest English settlement in New York State, “historic” is a relative term. To town preservationists, luxury is defined more by a house’s provenance than by its paint job and plaster, and history and leisure time have a symbiotic relationship.

As owners of an 18th-century village residence, Robert Coburn and his husband, Averitt Buttry, are keenly aware of maintaining their home’s integrity while vast swaths of the Hamptons are being transformed into shortsighted interpretations of “beach living.” In 1998, Coburn and a previous partner spotted a six-bedroom, five-and-a-half-bath home with a for sale sign on the front lawn. “I’d heard the house was going on the market,” he recalls, adding that the timing was right, as he had been pondering buying new, bigger digs to accommodate increasingly frequent family visits, particularly from a gaggle of nieces and nephews. Like most old houses, however, it required work.

“It was really daunting,” Coburn adds. “It was covered with green aluminum siding, and everything in the yard was overgrown. While it wasn’t necessarily neglected, it needed an extensive overhaul to bring everything up to date. There were worn beams and old fireplaces, and it was very dark, like the Addams Family house.” Even so, Coburn didn’t hesitate to make an offer. “I couldn’t ignore the fact that it was love at first sight.” Before moving in, he and his former partner promptly completed a major expansion and gut renovation to bring the place up to speed.

Built as a family farmhouse by Captain Daniel Halsey in 1742, it originally sat on hundreds of acres. Nearly two centuries later, after the Hamptons’ Art Colony had been established but long before the East End evolved into what it has become today, the home was purchased from Halsey’s descendants by the Stumpp family, German immigrants from Brooklyn, who set up a branch of their thriving nursery business to serve the wealthy summer community. “It was sort of the Mecox of its day,” says Coburn, adding that a fringe benefit of the Stumpps’ stewardship of the property is the specimen trees that still tower over the house, including two magnificent copper beeches.

In 2010, Coburn and Buttry completed a substantial design update. “There were real restrictions on what we could and couldn’t do,” Buttry says, with the Village preservation board scrutinizing every proposed alteration. Fortunately, both men know a thing or two about managing property: Coburn is a senior project manager at Cape Advisors, the firm behind the Watchcase residences and Baron’s Cove inn—two luxury developments in Sag Harbor—and Buttry is a broker in the Southampton office of the Corcoran Group. While neither had intended to move out of the city, becoming full-time Hamptons residents was a natural progression. The couple even married in nearby Bridgehampton and held the rehearsal dinner at their house.

Today the home’s exterior is shingled in attractive Alaskan yellow cedar shakes. During the renovation, planned cosmetic changes to the kitchen evolved into a completely rebuilt space, now functional, convivial, and airy, with sumptuous French limestone floors. Flow and floor plans were improved after a wall between the music and dining rooms was removed, and an archway was added to the entry to the sitting room. Even the age-darkened beams were freshened up throughout. “We had one man on-site for five months just brushing and sanding them,” Coburn says.

As for the decor—a combination of found items and family heirlooms—Coburn and Buttry enlisted the aid of interior designers Colleen Bashaw, Kyle Wells, and Suzanne Caldwell, all friends who have a crush on the house. “They cringe at the thought of our ever leaving,” says Buttry. “But we don’t have plans to move any time soon.” Besides, the couple is too deeply invested in the community, most notably as members of the Southampton Historic Museum (their home is frequently a stop on the village’s annual house tour). “Working on the house was a labor of love, and there are a few quirks here and there, but ultimately it’s not a high-maintenance place,” Coburn adds, pointing out that he and Buttry “sometimes feel more like stewards of the house rather than owners, in a way. It doesn’t have a gym or a movie theater or any other bells and whistles, but for us, it has everything.”

A version of this article appeared in the Holiday 2015 issue of New York Cottages & Gardens with the headline: Village Vanguard.