This chic gathering space gives a nod to its horse-farm past. 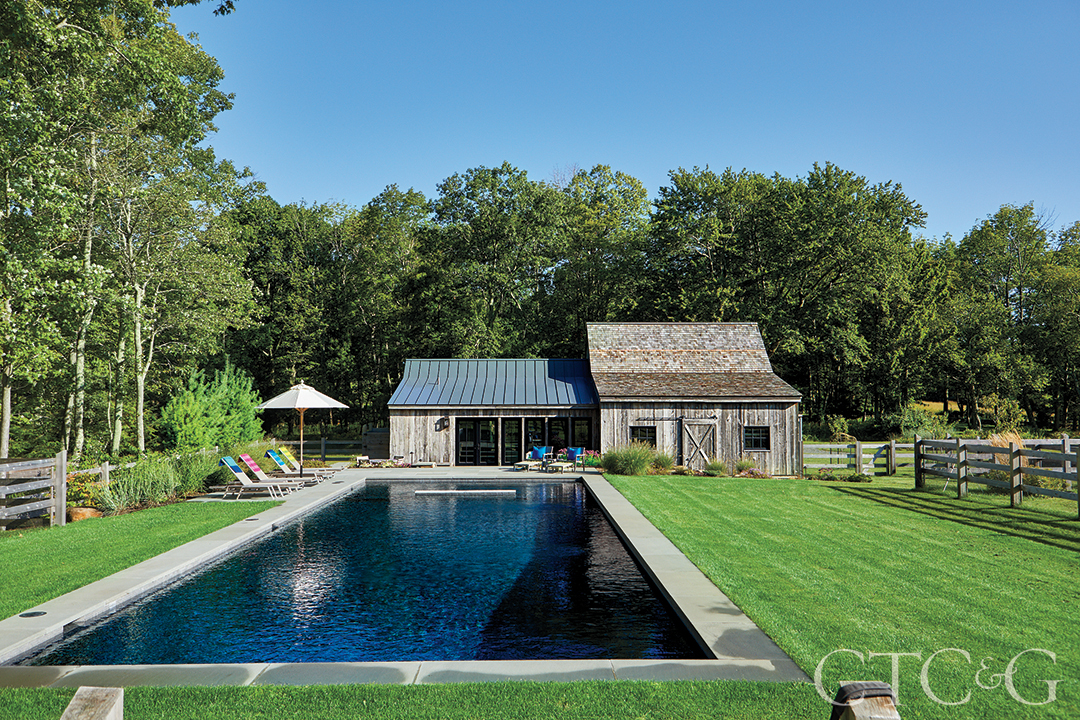 The owners of this property in Kent were originally drawn to the 21-acre horse farm because it satisfied two desires: It was on flat land and had stunning, uninterrupted views over the hills and valleys of northwest Connecticut. “Usually, it’s a tradeoff. You either get the flat land or the views. But you don’t get both,” notes the homeowner.

They were also enamored with the old-fashioned feel of the farm—wooden barns and fences, plus old stone walls. “I liked the rundown, charming part of the property,” says the homeowner. “We did the house first. Then when we did the pool, we wanted to have a rustic barn feel. The barn still had the old horse stables and rotted floors.” 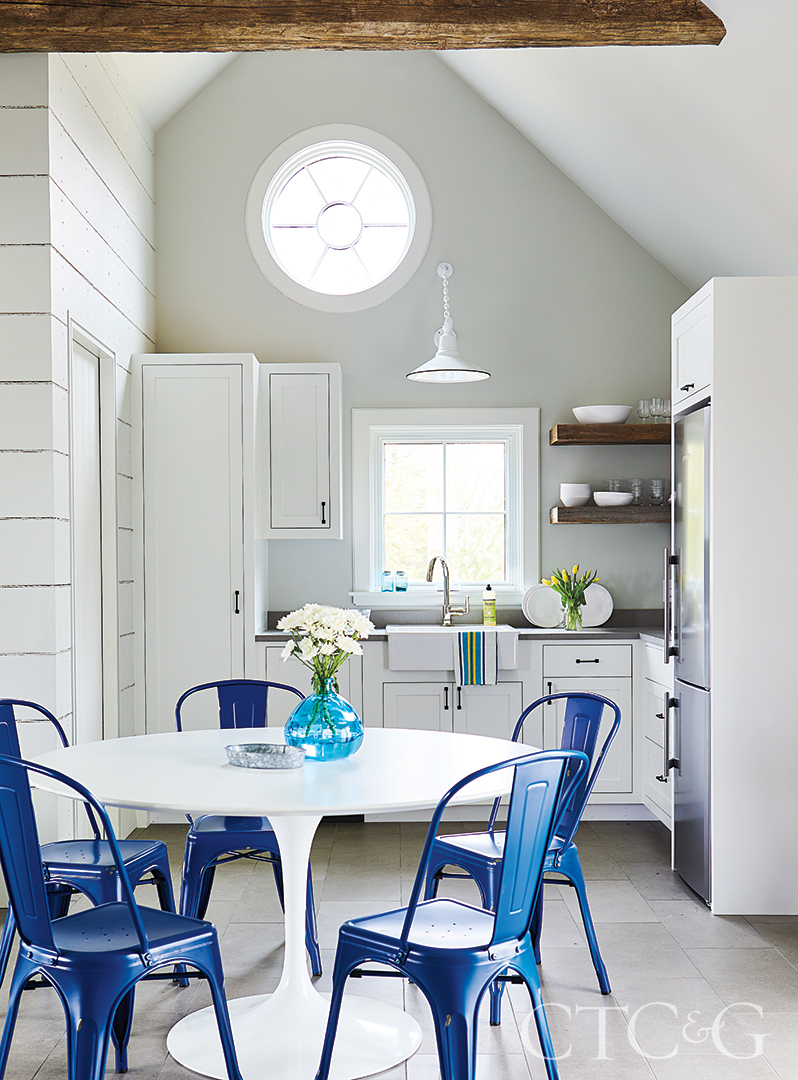 They hired Litchfield County architect Steven Kalur of F+H Architectural Design & Associates and his interior designer wife, Claudia Kalur of CFK Interiors, to design a pool house. Steven suggested that they convert the barn instead. “But I cautioned them,” explains Steven, “that when you start with an existing structure, you can discover things that make it really expensive or unfeasible. In trying to dig and build a foundation, we immediately found lead, ground water, plus the larger of the two structures was leaning badly. We had a come-to-Jesus moment.”

So they decided to start from scratch yet retain the character of the previous structure. “We rebuilt an old barn, even though we took it down to the studs,” says the homeowner. “That wasn’t part of the plan.” 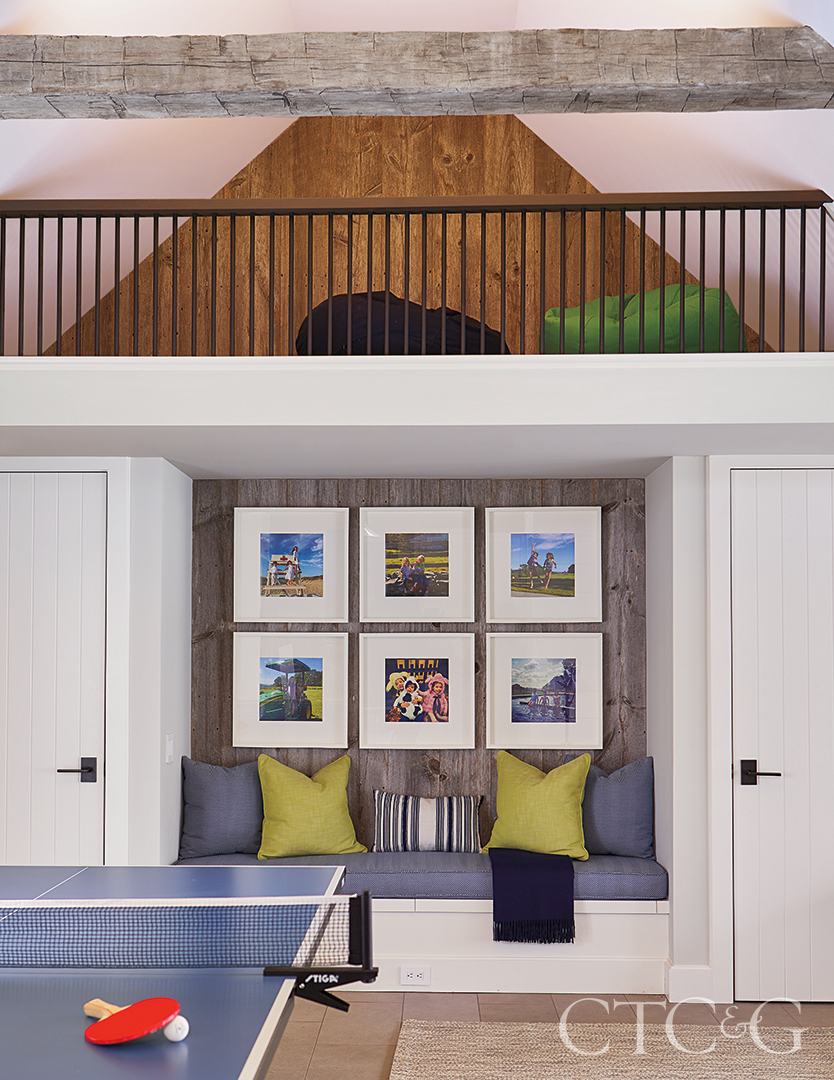 The homeowners wanted the structure to be a year-round spot for their young family of five—a pool house in the summer and a cozy entertainment area in the winter. Although they used the property primarily as a weekend retreat from their downtown Manhattan loft, the family moved here full-time—at least for now—when Covid-19 struck.

On approach, the pool house looks like a barn with two big doors. “We wanted people who drove into the property to see exactly what they saw before,” says Claudia. But roll those doors back, and French doors reveal an airy, bright pool house, terrace and sublime dark pool beyond. 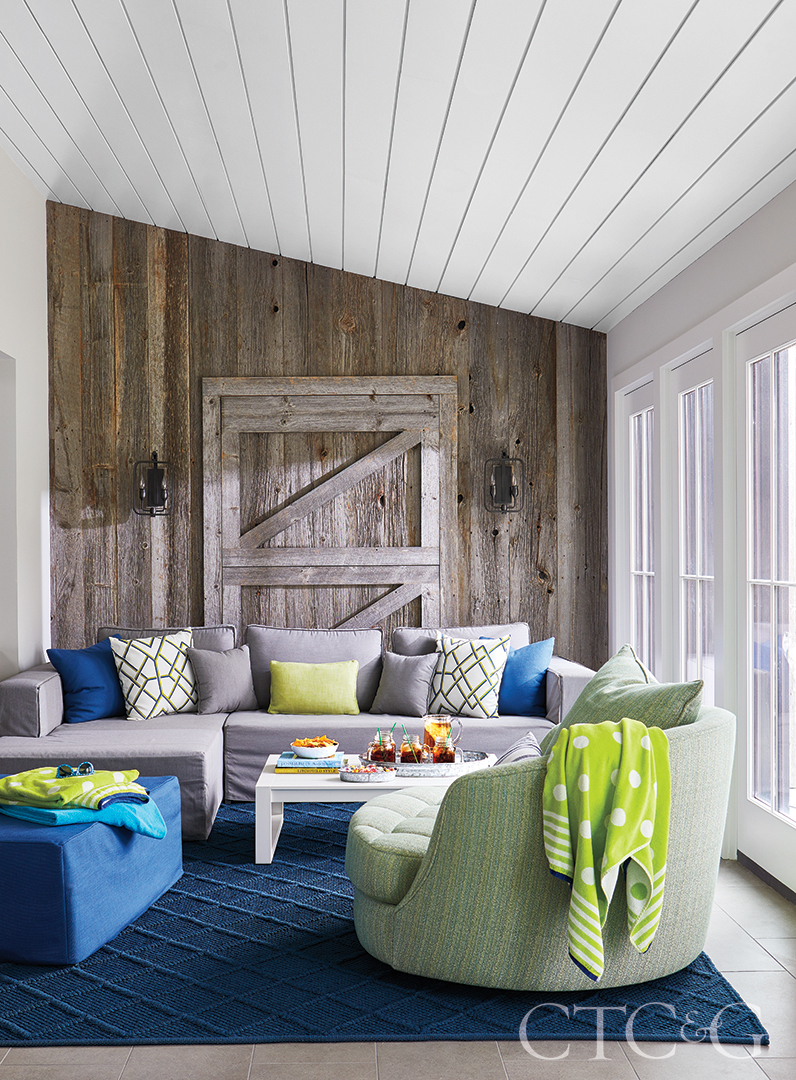 “We wanted it to be a happy and bright space, kid friendly, pool house-y but not totally,” says Claudia, who used cheerful, outdoor fabrics throughout. “It’s also a place that the kids come to in the winter and feel like they are inside a playhouse with a fully functional kitchen, bathroom and shower.” A zip line and fort are stationed nearby, while another barn houses a basketball court. On snowy winter days, the kids trek to the pool house after sledding and read or watch movies on a large-screen TV.

The finishes give a nod to the original barn: Reclaimed timber from Quebec (100–120 years old) is used to clad both of the barn buildings. Inside, pine planks are nailed horizontally to the walls with hemp rope in between the planks, a classic barn construction used to store grain—the rope prevents grain from spilling through the cracks.

A ladder hidden in a closet leads to a “hayloft” where the children like to lie on bean bags with their friends. A realistic-looking Dutch door has been fixed to one wall, where, in a past life, a door was used to move horses from the running shed to their stalls. Reclaimed beams hold the building together structurally. In the kitchen, floating shelves are crafted from the same reclaimed Canadian wood.

“I don’t like seeing reclaimed timber tossed into a building willy-nilly in an attempt to make it look authentic,” notes Steven. “I am very specific that if something like that goes into my building, it should be doing its job.”

What’s next for this evolving estate? An apple orchard is in the works. 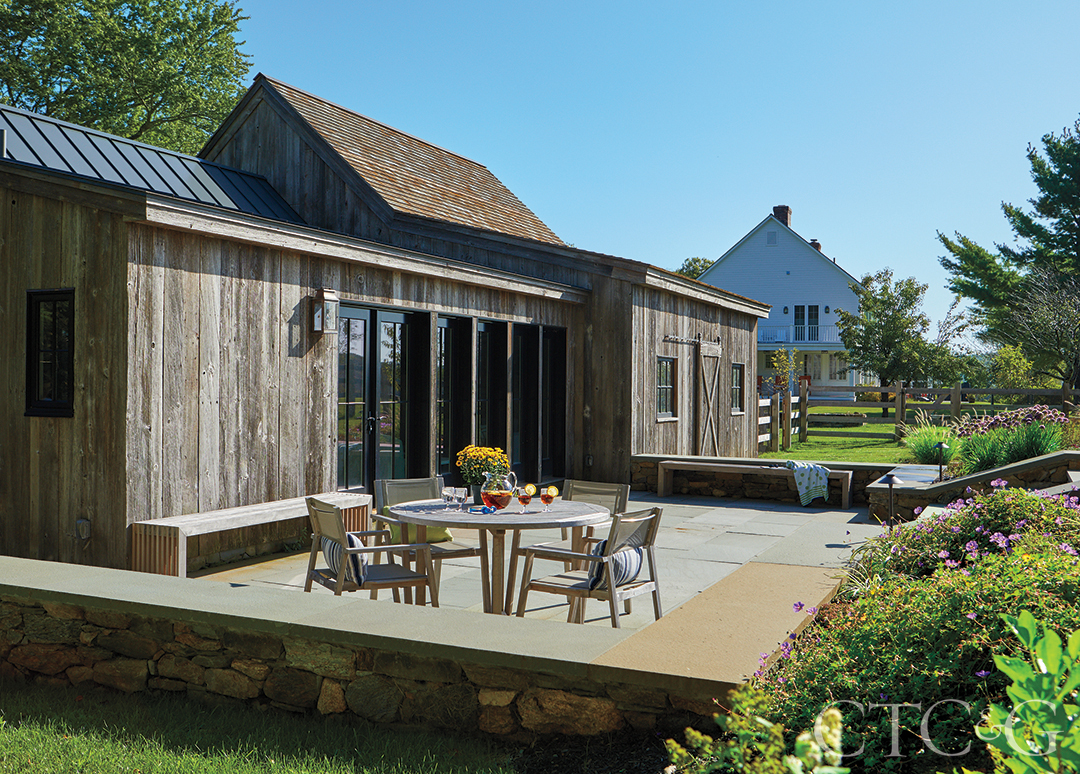 The print version of this article appeared with the headline: Deeper Dive.

This article appears in the July/August 2020 issue of CTC&G (Connecticut Cottages & Gardens).