Tour a Light and Contemporary Home in Bridgehampton 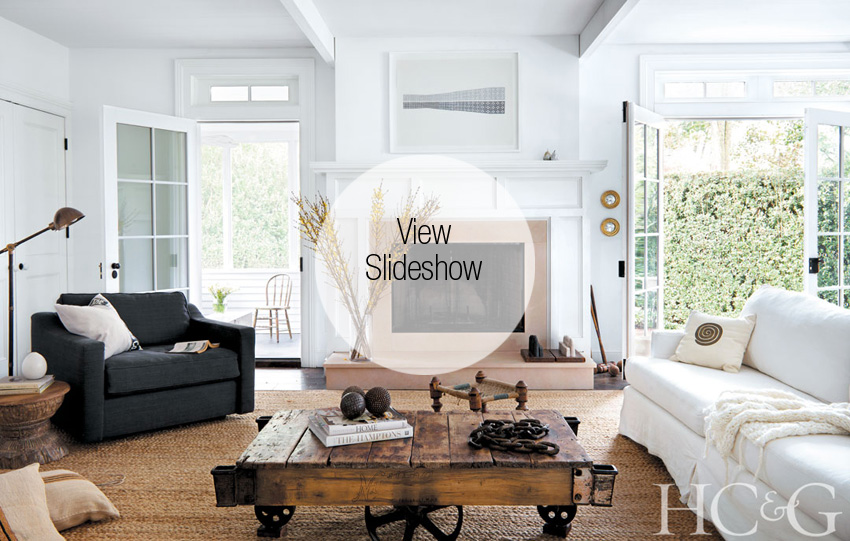 In 1998, Amelia and Dave Silver fell in love with an 1860s American colonial in the heart of Bridgehampton. But after  living in the home for 12 years, they found themselves longing  for a larger, more functional house, though they didn’t want to compromise the original structure’s pedigree or character.

Enter Marie-Christine McNally Kresse of Marie-Christine Design, a Montreal-born, Manhattan-based decorator whom the Silvers met at a party. Kresse was no stranger to major overhauls, having been deeply involved in all phases of renovation and construction work on both her New York apartment  and her Amagansett weekend place. “We went to see Marie-Christine’s house in Amagansett and loved her style,” recalls Amelia Silver. “Rustic, industrial, simple, and functional.” But the Silvers also needed someone who could “step in for the architectural detail as well,” which Kresse handily did, working closely with the couple’s builder, Kevin Miller, of Freeform Construction in Nassau County.

The Silvers wanted to “maintain the look and feel of the original house while getting the added space they needed,” explains Kresse, whose mandate was to create a “clean, bright, comfortable contemporary space in an older house full of character.” To the designer, “building or renovating a house is stressful enough,” so during the early stages of the design  process, she asked the Silvers questions that helped her  understand “how they live, how they wanted the space to work,  how they wanted it to look, and what their priorities were.”

The Silvers are a Manhattan-based couple with an 11-year-old son, Luke, and dog who treasure sunshine and surfing and love sharing their barefoot and beach time with friends and family. At approximately 1,800 square feet, their house—originally built for a man who helped oversee the construction of the railroad into Bridgehampton-—was a cozy retreat, but not particularly comfortable. With the expansion, it has nearly doubled in size, gaining an extra 1,320 square feet, though the integrity of the historic structure has been retained. (In fact, from the street, one can barely tell that virtually the equivalent of a whole new house has been added to the back.) Now the home boasts a large open kitchen, great room, and screened-in porch on the main floor, and upstairs a master suite was added, comprising a bedroom, bathroom, walk-in closets, an office, and a sun deck.

Reclaimed wide plank floors, antique doors, and oversize windows are seamlessly integrated into the newly designed rooms. “Marie-Christine suggested the horizontal wood  paneling and beams on the ceiling in the great room, which are a wonderful detail,” says Mrs. Silver, adding that the designer deftly mixed in old or repurposed furnishings with slightly more modern pieces. “She took inventory of what we had, redid some items, made new use of others, and filled in  a few key spots. She made excellent choices.”

New light fixtures in the kitchen and the master bedroom,  for example, draw attention to charming corners that  otherwise might not be noticed. And while the island in the modernized kitchen is industrial all the way, the dresser in the master bedroom has been with the homeowners for years. “I did not think I could stand to look at it anymore,” Mrs. Silver says, “but Marie-Christine took the top off and put a piece of white stone on it. It has a completely different feel, and now I love it!”

A version of this article appeared in the August 1 2012 issue of HC&G (Hamptons Cottages & Gardens) with the headline: Silver Lining.