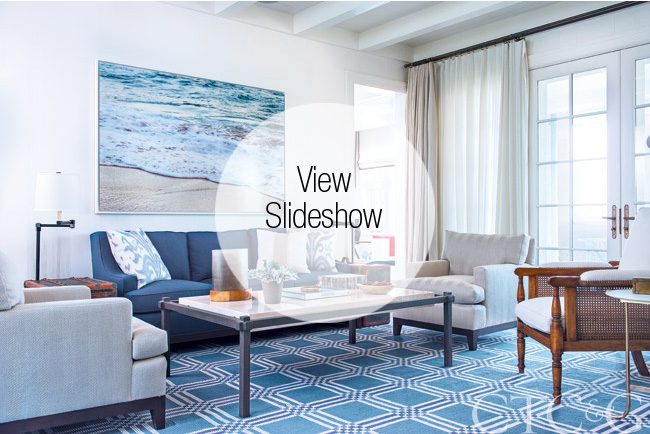 Sometimes people know precisely what they want. That was certainly the case for a single father with three nearly grown children looking to create a welcoming family nest. According to interior designer Alicia Orrick, even before they met, her client had very clear parameters about where he wanted to live. This included being on the water in Rowayton in a house that didn’t mandate any renovation. “Houses meeting those requirements are scarce at best,” says Orrick. “But he actually found a classic New England shingle-style home built in 2005 in pristine condition.”

With that out of the way, the father put his 20-something daughter in charge of securing a designer. Her search led to Orrick. After some preliminary planning meetings, it was clear her client also knew exactly how he wanted to live. “The house needed to reflect its surroundings while avoiding nautical clichés,” says Orrick. “The overall interior design had to suit the personalities of the occupants, and everything had to be installed in time for him to host his first Thanksgiving celebration.” The latter necessitated a breathtaking turnaround of less than two months.

Within two weeks, the designer delivered a floor plan for the five bedroom, six-and-a-half-bathroom house detailed down to the rugs. “I had fabrics, furnishings, lighting and antiques all figured out,” explains Orrick, who used the home’s natural palette as her preliminary guide. “With the proximity to the water, there’s an ever-changing chorus of whites, blues and pinks dancing on the walls. I sought colors that accept the light as my starting point, using whites, creams and faded blues to pull the outside in and create a sense of integration.”

Simultaneously, Orrick engaged in her usual process of gathering as much information as possible about who her client is in order to reflect that in the interior choices. “Every project has its own dynamic, and it’s like painting a portrait of the homeowner,” says Orrick, who responded to her client’s devotion to family with a room designed with casual gatherings in mind. At the core, an oversized sectional is large enough for everyone and the dogs to pile on, put their feet up on the durable teak table and watch a movie.

In contrast, the intimate living room is a more formal space where there’s just enough seating for six. “It’s a wonderful scale for entertaining small groups, or for when he’s there by himself,” says Orrick, who continued the color palette with a navy linen sofa and cream-colored chairs.

While togetherness is a central theme (the third-floor pool room provides an array of interactive games and activities for that purpose), carrying equal weight is the respect for privacy and spaces each family member can enjoy separately. “The older daughter, who lives full-time in Manhattan, wanted something luxurious and sophisticated,” says Orrick, who answered that request with a plush velvet bedspread, shimmery leather headboard and chic mirrored vanity table.

Meanwhile, the younger daughter, still in high school, simply said “make mine pink and navy.” Her ultra-feminine room features linens trimmed in the requisite colors, a deep blue sofa and hot pink lampshades. Down the hall, the room for the son, who resides out-of-state, boasts a dark brown linen bedspread, cushy leather armchair and a steer skull on the wall, all meant to strike a decidedly masculine chord.

The squared-off headboard, backed by white board-and-batten walls in the master bedroom perfectly suits the owner’s preference for a clean and unfussy retreat. Like almost everything in the house, all the pieces were custom made to meet the tight deadline. “Normal lead times are four to five months, so custom was the only way to go,” explains Orrick, who can now look back and smile about her ability to deliver. “On Thanksgiving Day, the owner hosted 26 people. He was a happy man, and I was glad I could make it all come together.”

A version of this article appeared in the June 2015 issue of Connecticut Cottages & Gardens with the headline: Sound Thinking.