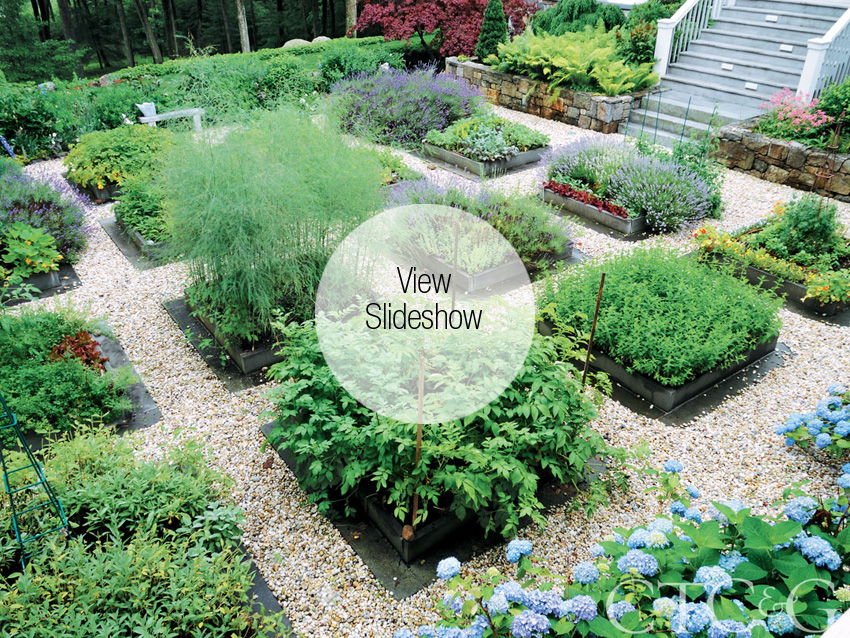 Everything went smoothly when the Stewarts made the switch from New York City  to four acres in New Canaan.

One area of the property, however, was a little too smooth: The driveway’s slick finish often caused skidding during the winter months. It wasn’t long before Ann Conrad Stewart and her husband were ready for the more traction- and eco-friendly option of gravel. While in the process of planning the blacktop’s demise, they reassessed their vehicles’ space needs. That’s when Ann kicked into kitchen mode: Why not turn asphalt into arugula?

The fact that Ann Conrad Stewart is a printmaker has everything to do with the outcome. Take a block print, segment it into savory squares, lay it on a grid, raise it up, and then graze on it throughout the summer, and you have the synthesis of her driveway-repurpose project. Now, from April through December, it produces a bounty that starts with the first asparagus of spring and continues through to the last kale before snow. The garden delivers ingredients for every meal of the day, plus snacks for the family’s three kids.

Stewart started gardening on a rooftop in New York City, so she came into the project with a yen for eating locally—preferably within footsteps of the kitchen. “Our kids need to know where their food is coming from,” she decided years ago, “and they should have a hand in producing what they eat.”

This sleek garden is the polar opposite of your grandmother’s scruffy vegetable patch. Immediately around the house, a stone wall skirts a bed that corrals conifers and shrubs. In the next level, vegetables and herbs are confined within smart square bluestone boxes framed by bluestone hems and surrounded by bleached peastone gravel. The swank and serviceable framework around the plants provides the passive solar effect of warming the beds before and after the typical growing season. The layout can be viewed from a raised covered walkway with hammock-like rope chairs suspended from the crossbeams. On the south side sits the house. Stewart rolls out her art in her studio opposite. More often than not, she throws open the south-facing barn doors of her studio to bask in (and be inspired by) the beauty of basil, beets and broccoli.

But it isn’t just about eggplants and escarole. The garden does the salad course as well as the main dish, complete with seasonings. Herbs are a major part of the picture, including all the obvious suspects such as parsley, sage, rosemary and thyme but also going beyond mainstream to include lavender, marjoram, oregano, nasturtium, basil and spearmint. Many of the herbs are perennial and spice up the garden with a constant dash of flowers, around which vegetable crops are rotated. Before the green beans dry up, Stewart has already planted another wave of haricots verts. Meanwhile, the garden is fed midseason snacks of compost to keep it pumping out the produce. “It’s rigorous,” she admits, “raised beds tend to be hungry.” They’re also thirsty, so drip irrigation delivers water.

Yes, there’s labor involved, about 10 hours a week during spring start-up. But the resulting crop is worth it. “The asparagus might not look as glamorous as the grocery version,” Stewart says, “but it’s not stringy. It’s a totally different animal.” She concentrates on crops where the freshness factor makes a difference. “Lettuce has such a short shelf life, so we grow our own.” Do they have excess? Definitely. So she dries the herbs and gives them as gifts. Even the couple’s children get into the act. “Our thirteen-year-old harvested 38 batches of spearmint and sold it to a local market.” How does the garden compare to blacktop? No contest. Unpave the parking lot, put in a paradise.

A version of this article appeared in the September 2012 issue of CTC&G (Connecticut Cottages & Gardens) with the headline: Natural Selection.