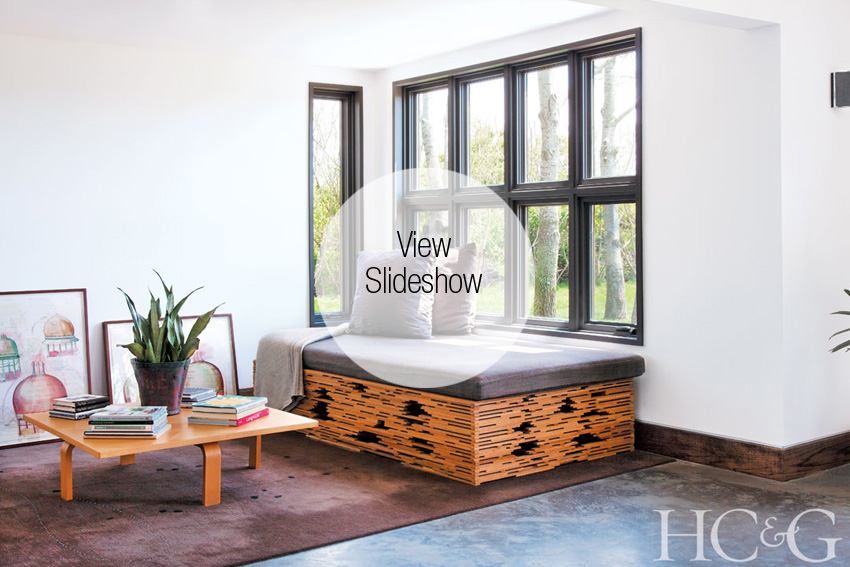 One can’t help but think of the mythic phoenix while admiring the Sagaponack home of painters Ross Bleckner and Eric Freeman. With feathers of purple and green, crimson and gold, this marvelous creature ends its life in a nest of flames, while another bird—even more beautiful—rises from its ashes. Similarly, when a 2009 fire virtually destroyed the artists’ 1,700-square-foot house, a new, elegantly spare residence soon took its place on the verdant five-acre site tucked behind the ocean dunes.

Bleckner, one of America’s most renowned contemporary painters—his luminous, elegiac work has been shown at Mary Boone Gallery since the late 1970s—bought the property in 1990, drawn to its “aura of simplicity” and colorful history (writer Truman Capote was a former owner). While the structure was “overgrown and unattended to,” says Bleckner, it was also “a wonderfully relaxing beach place.” Freeman, a painter whose vibrantly glowing abstractions were most recently shown at Western Project in Los Angeles, admired the untamed landscape, but was less starry-eyed about the house itself.  “When Truman owned it, this place was very funky—a shack, really. It wasn’t even winterized.”

The men, once a couple and now best friends and housemates, hoped to make the home suitable for Freeman’s year-round use (Bleckner relocates from Manhattan during the summer months) without sacrificing the property’s rustic charm. They found they could part with some of Capote’s kitschier touches, like blue floors and floral-print wallpaper. After insulating the walls, they added a bedroom and two screened-in porches, and built a large painting studio on a hidden corner of the lot. While these improvements provided greater comfort, Freeman thought the place was still a little rough around the edges. “It was an awkward house,” he recalls, “a hodgepodge of rooms that didn’t flow and relate to one another.” Things might have remained that way, had a blaze not started one autumn morning in a second-floor den. Freeman, who was home at the time, called the fire department and tossed buckets of water himself until help arrived.

Bleckner, who confesses to a complete lack of interest in decorating, was inclined to rebuild an exact replica of the previous home. “My mind doesn’t work that way,” he says. “I focus all my creativity on painting. The infinite options of interior design test the limits of my intelligence—and my patience.” But Freeman saw an opportunity to get things right—and try out his own considerable design chops. “I wanted to preserve the house’s cottage-y feel, but my goal was to make it look unified, intentional, not slapped together,” he says. To that end, Freeman added more windows, removed an unsightly fireplace, redirected a staircase, and enclosed the two porches. Adding a new bedroom suite boosted the home’s square footage to 2,200; Freeman converted his own former bedroom into a laundry area and half-bath. New solar panels and a geothermal heating and cooling system have taken the house, he adds proudly, “95 percent off the grid.”

For two such extraordinarily visual people, it’s surprising to see how few artworks and mementos are on display. Indeed, with its predominance of dark wood cabinetry and flooring, as well as a color scheme that seldom deviates from white and brown, the aesthetic is nearly monastic. But make that a luxurious monastery.  “Both Ross’s and my paintings are saturated with color, so it’s good to have a break,” Freeman explains. “Our decor, or lack of it, is a palate cleanser.” Bleckner agrees: “I have a minimalist sensibility, and I don’t like to have things around me,” he says. “Pictures, tchotchkes, stuff from my past. Why bother? The accumulation of all that would make me feel a little dead. I’d much rather live in the present, surrounded by the now.”

A version of this article appeared in the July 1 2012 issue of HC&G (Hamptons Cottages & Gardens) with the headline: The Ross School.