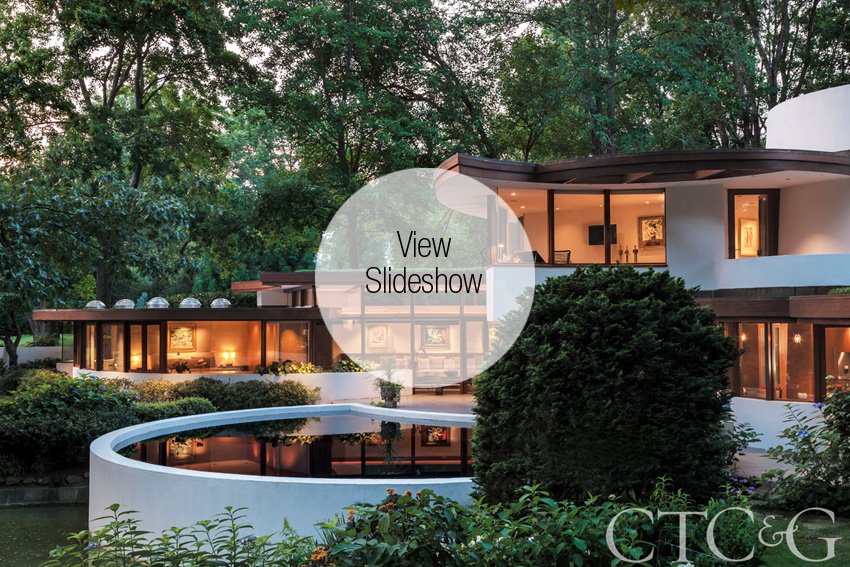 Taliesin Fellow Allan Gelbin once said of this 1966 modern: “No study of my work is complete without this project. It was my first opportunity to be able to use a little imagination.”

Gelbin, who designed a number of houses in Connecticut, developed the design of this home in close collaboration with the original client, a Swiss engineer who spared no expense with structure and materials. The millwork and hardware were all imported (Sapele mahogany from Africa, handcrafted brass hardware from Denmark). The house is full of curved mahogany cabinetry and built-ins, circular skylights and views of a lush landscape that includes the largest gingko in Connecticut and a crape myrtle that’s carefully wrapped every year to survive the New England winter.

The current owners, who bought the house 15 years ago, knew that it needed both a restoration and a subtle redesign of outdated elements. There were leaks, an unreliable heating system, a dark entry and very small bedrooms. The kitchen and bathrooms also needed an update. Architect Jeff Kaufman, who led the project, was determined to respect the original design, and he wanted the renovation to be as seamless as possible.

Kaufman’s firm worked closely with the owners, interior designer Eric Dyer and builder Ian Hobbs. Dyer loves geometry and aims for an intuitive flow in sculptural spaces. His work is especially evident in the kitchen, where lights, curved cabinetry and a graceful island work in harmony.

High on the list of priorities was to bring more light to the entrance. First, an exterior wall that blocked the view of the front door was opened up. Then, the architect designed a restrained but sculptural glass cube at the entrance and raised the first-floor ceilings so light could flow in.

The old entry led into the kitchen, which was built inside the central circular structure. The central core was enhanced by moving the kitchen door and opening up a wall on the side, thus extending the view into the family room and out onto the landscape.

In a gesture of farewell to the ’60s, an interior free-form pool was removed, which made room for an office behind an opaque glass wall that follows the curve of the kitchen. The frosted glass with its vertical mahogany structure is a quiet counterpoint to the rough plaster of the central cylinder and the floating stair that ascends around it. To add light and clarity to the interiors, opaque
circular skylights were updated with clear glass.

Though the house has a generous living room with a sloping ceiling and a curved wall of glass, the second-floor bedrooms were very small. One bedroom was eliminated so the rooms on either side could be enlarged and gain storage space. The upstairs bedrooms and office no longer look out over the black flat roofs of the lower areas: A green sedum roof creates the illusion of a stepped garden.

In another environmentally conscious choice, the outdated heating system was replaced with a geothermal one. Existing spaces for systems and laundry were expanded using exterior mahogany trim and white stucco to keep facades consistent with the original building.

A guesthouse tucked in behind the carport was nicely situated in relation to the main house. But the steps leading to it along a high concrete wall made it feel like walking down to basement level. By slightly regrading the site and lowering the walkway wall, the guesthouse entrance now enjoys a full view of the pond, pool and trees.

For the owners, one of the pleasures of the original design is seeing one volume of the house from another. There’s a sense of being enveloped, never isolated. “The rooms are not big or overwhelming,” says one of the owners, who paints and takes an active interest in the garden. “I love looking out—the outside is always with you, even at night with the moonlight coming in. It’s beautiful inside and beautiful outside. It’s different from every other thing you’ve ever seen. It’s like a big bird…this graceful thing that’s spread out over the land.”

A version of this article appeared in the November 2012 issue of CTC&G (Connecticut Cottages & Gardens) with the headline: Complimentary Angles.