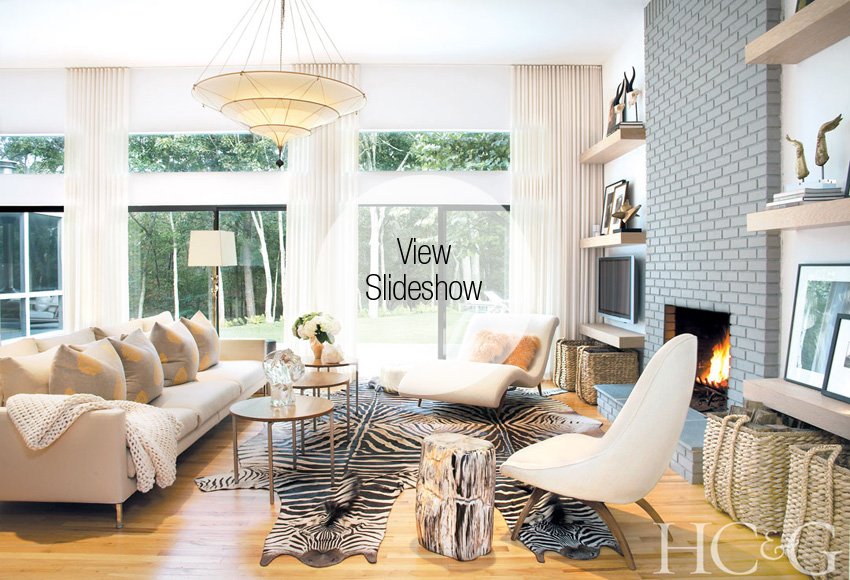 In 2002, after a frenzied period of house-hunting in the Hamptons, Manhattan-based interior designer Paul Davis and his partner, Julio Hernandez, a colorist at the Stephen Knoll Salon, were ready to give up and rent again. Davis recalls that they had seen “50 to 60 houses, including farmhouses, but nothing contemporary,” and hadn’t felt at home in any of them.

Then one day their real estate broker took them to see a nondescript cedar-shingled home in the Northwest Woods, outside East Hampton. It wasn’t officially on the market, but the women who owned it were looking to downsize. “We went over in the morning and bought it that afternoon,” Davis says. “We didn’t think that we would ever buy a modern house, but the minute we walked through the door, we just knew that this was the right place for us.”

Built in the mid-1970s and featuring a whimsical porthole window beside the front door, the 2,200-square-foot home centers on an airy great room, which separates a master suite on one side and two guest rooms on the other. “The house was in fine condition,” says Davis. “We did very little to the outside, although we took down a ‘nude sunbathing porch’ off the master bedroom, which meant redoing the windows.” Although the designer regrets not refinishing the floors before moving in, he hasn’t given up: “Right now they’re standard oak floors, which are fine, but I definitely intend to replace them someday.”

Although the couple did not reconfigure any of the living areas, they gutted the bathrooms and kitchen and doubled the size of a screened porch that looks out on the pool. Additionally, Davis says, “there was no landscaping at all. The house was just sitting in the middle of the woods, so we took down some trees to open it up, though we still have total privacy here.” (That includes the outdoor shower, which is sheltered by a redbud tree.) While the men covet peace and quiet, they also love to cook and frequently entertain. “We live on the porch in the summer,” adds Davis, who points out that an outdoor fireplace means they can actually entertain friends in the backyard year-round.

The chef’s kitchen, with a Gaggenau cooktop and Wolf wall ovens, combines custom lacquered wood cabinetry by Davis with hand-crafted aluminum pulls by metal artisan Paul Benson. Most of the counters are Silestone, but the dramatic prep island is wrapped in slabs of onyx. “You wouldn’t normally use onyx in a kitchen,” Davis says, “but somehow it works for us. You can’t cut on it because it’s too soft, though it has held up well.”

The walls of the house are painted throughout in Benjamin Moore’s Decorator’s White, and furnishings include a mix of modern, vintage, and antique pieces, including chairs designed by Hans Eichenberger and Knoll. Some are remnants from the days when the couple co-owned Distant Origin, the SoHo home furnishings shop that Hernandez founded in 1987. “Julio and I used to travel a few times a year for the store, which represented Fortuny, so we often went to Italy and found the most amazing glass artists, such as Luigi Benzoni,” says Davis. “Our shopping rule was that we would never buy anything to sell that we wouldn’t want to live with. But despite our best intentions, quite a few of the things we bought eventually found their way into our home.”

A version of this article appeared in the July 15 2013 issue of HC&G (Hamptons Cottages & Gardens) with the headline: Modern Love.