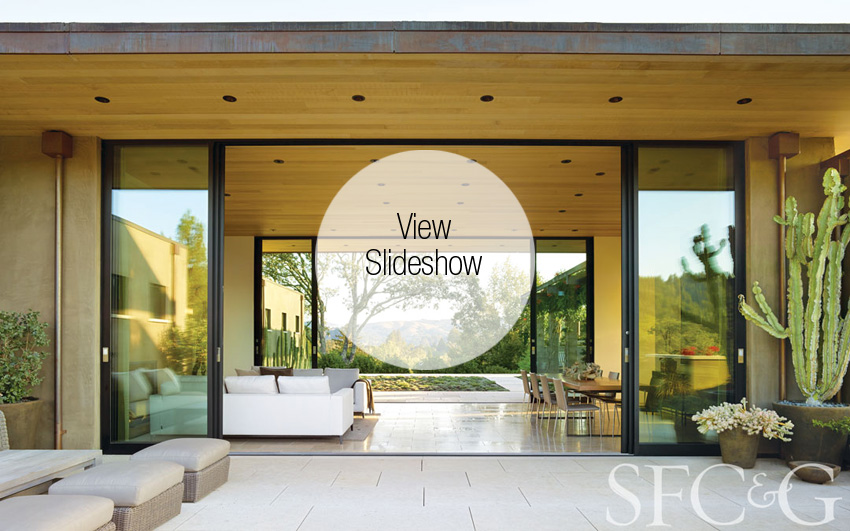 Thirty years ago, when they were both in mid-career transitions, Charlie Barnett and a fellow student struck up a friendship during an architectural drafting class. Her subsequent studies at Berkeley led to a career in city planning, while he attended Harvard before establishing his current practice in residential architecture. They had kept in touch on and off over the years, until she and her husband decided that their family—including 10 grandchildren—needed a larger gathering place. They enlisted Barnett to actually join in their hunt for a new home. “It felt wonderful to circle back to each other after so much time,” says Barnett.

The search took a while because, says the client, “It was such a tall order. We wanted something close to town, with a view and within walking distance of Phoenix Lake,” a reservoir surrounded by hiking trails. The three-quarters of an acre they eventually found on a nearby hilltop (though it had a 1950s ranch that didn’t lend itself to being remodeled) more than fulfilled their need for a vista. It looks north onto oak-covered, rolling hills, west to Bald Hill and east to a charming, century-old seminary. And its rapturous, unobstructed southern take on Mount Tamalpais guided the orientation of all the main living spaces in Barnett and the couple’s collaborative scheme for the new dwelling.

Barnett envisioned a traditional building, but the client, inspired by International Style architecture, pushed for spacious, spare and modern. “I wanted glass, steel and concrete,” she recalls. “I wanted the only dark room in the house to be the wine cellar, and I had visions of 12-foot-high windows, skylights and a straight shot to outside whenever I’d walk along a hallway. All of which I got!” She also achieved a minimalist look that celebrates materiality by co-designing tables and bedroom furniture with project architect Rob Stiles, and enlisting interior designer Kim Castro to acquire neutral, clean-lined upholstery.

The completed, 4,000-square-foot house actually has close neighbors on four sides, but thanks to Barnett’s elevated site plan, it appears to hover on the edge of a vast, 360-degree wilderness. The landscaping designed by Lutsko Associates’ senior member Terri McFarland bolsters the illusion and integrates the indoors and outdoors with its pocket gardens and strategic placement of mature fruit trees, flowering vines and verdant shrubs. Because of the symbiosis between the architectural and plant materials, the living room turns into a pavilion when its glass curtain walls are opened. Egyptian limestone—honed in the interior space and flamed when it travels outside—terraces around a rectangular, ground-cover tapestry of silver carpet, creeping thyme and Turkish speedwell before it encloses a slim lap pool that reflects the sky and discretely serves as a retaining wall. Clematis and jasmine camouflage walls, while trumpet vines attract hummingbirds as they climb the concrete posts of a plein air dining arbor.

“Considering its proximity to town, it’s remarkably peaceful here,” says the homeowner. “Maybe it’s the soothing church bells that ring on the hour? Or maybe it’s because we feel close to the clouds?”

A version of this article appeared in the April/May 2016 issue of SFC&G (San Francisco Cottages & Gardens) with the headline: Cultivating a Dream.