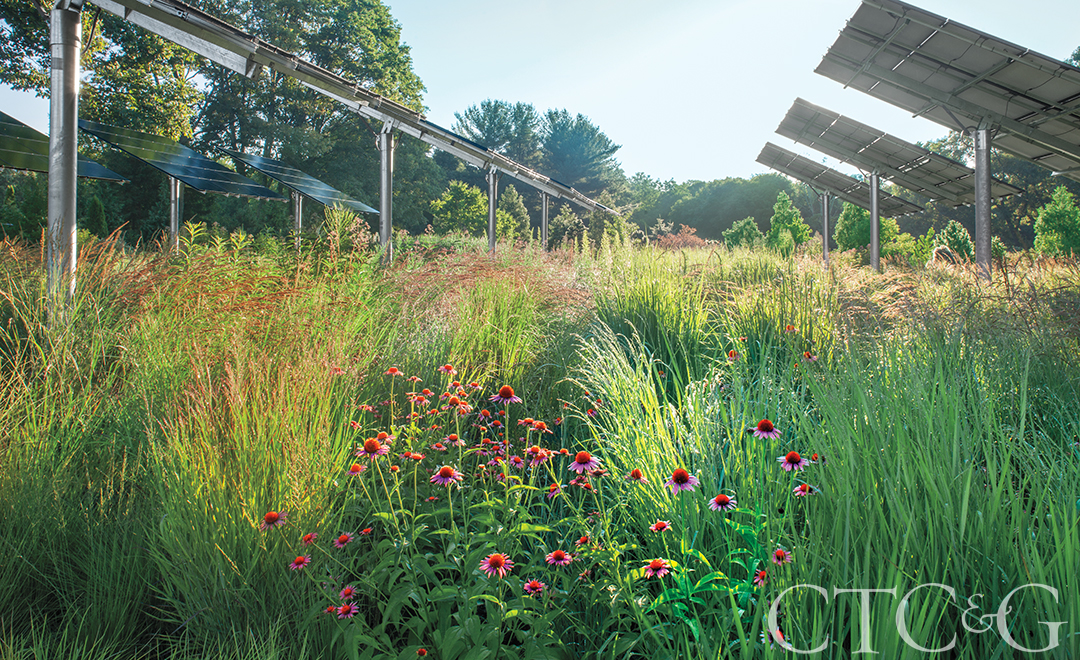 Tapped to design a garden encompassing 300 raised solar panels, the first thing landscape designer Brian Grubb of Providence Landscapes did was tackle the prevailing negative attitude toward the projections more commonly associated with rooftops than flora and fauna. “There is an overwhelming sense that solar panels are ugly and they need to be hidden,” says Grubb, who ultimately adopted a metaphorical approach that likened the panels to trees in an orchard. “With fruit trees, your currency is apples, and in this case our product was kilowatts. But more than just something to reduce electricity, I wanted to create a statement space you could move through and spend time in.”

The concept was not entirely of his own making, as the enlightened homeowners, who are avid art collectors, were obsessed with the notion of not only creating their own energy but also having the panels and ensuing gardens designed to be its own art installation. “We had this epiphany that the panels could be raised up so that you became interested in what was underneath,” says the wife. “We envisioned a contemporary orchard filled with not just plants, but with butterflies, bees and other pollinators.”

Having purchased the classic Georgian Palladian residence on 10 acres some 11 years prior, the wife, an accomplished gardener, reworked the property along with landscape architect Janice Parker. The ensuing polished formal landscape provided the perfect backdrop for their extensive outdoor sculpture collection, including a 15-foot-tall dandelion by artist Paul Morrison—a whimsical anomaly in the perfectly manicured property—and a flowing mirrored fence by Alyson Shotz, an iteration of the version she created for Storm King Art Center. 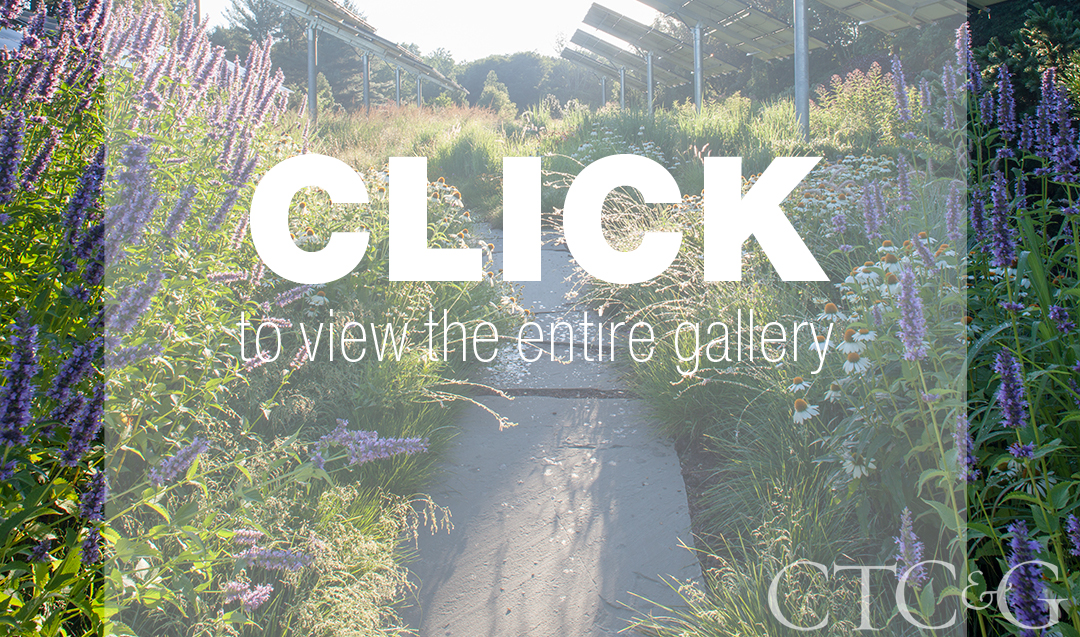 All the while, the notion of a solar garden was percolating as the couple researched products, applied to federal tax-credit programs, and pondered the perfect placement. When the neighboring property came on the market, the husband says they purchased it because, “It was three-and-a-half acres that included more open space for continuous sunlight.”

Phase one began with securing the panels—galvanized on top and painted white underneath for a less imposing look—with concrete foundations. Come winter, Grubb laid out pathways in the snow, and post snowmelt filled the walkways with oversized flagstone pavers. “Originally, I thought because these panels are at an angle, the water would sheet off the same edge. But it was more random than that, so I had to be there in the spring rain to flag where water was actually splashing,” says Grubb, who then set the pavers so water would hit the stone and not the plants. “It was also important to create a connection to the house, so there’s a path from the side door that walks you right down the center.”

To initiate the planting phase, the landscape designer kick-started the process with 20,000 grasses planted along the edge of the pathways. “I wanted everything to look very lush from the start,” adds Grubb, who layered on moisture-loving lobelia, Japanese iris, butterfly weed, a variety of sedges, and an excess of coneflowers to attract gold finches. And in response to the owner’s “free sense of color,” he filled in the gaps with bright cardinal flowers, hibiscus and coreopsis. To keep the neighbors happy, Grubb screened the space with over a hundred dwarf evergreens. “They are varying heights and establish a sense of enclosure without interfering with the panels,” he explains.

Over time the effort has paid both financial and visual dividends. “We know we live in a large footprint and are so pleased that we can create our own energy,” says the husband, who notes they no longer have electric bills. As for the physical aspect, the wife adds, “Every Friday evening, we head there for cocktails. When you walk into the space, you don’t see the panels, all you see is a beautiful garden.”

A version of this article appeared in the May 2019 issue of CTC&G (Connecticut Cottages & Gardens) with the headline: Flower Power.