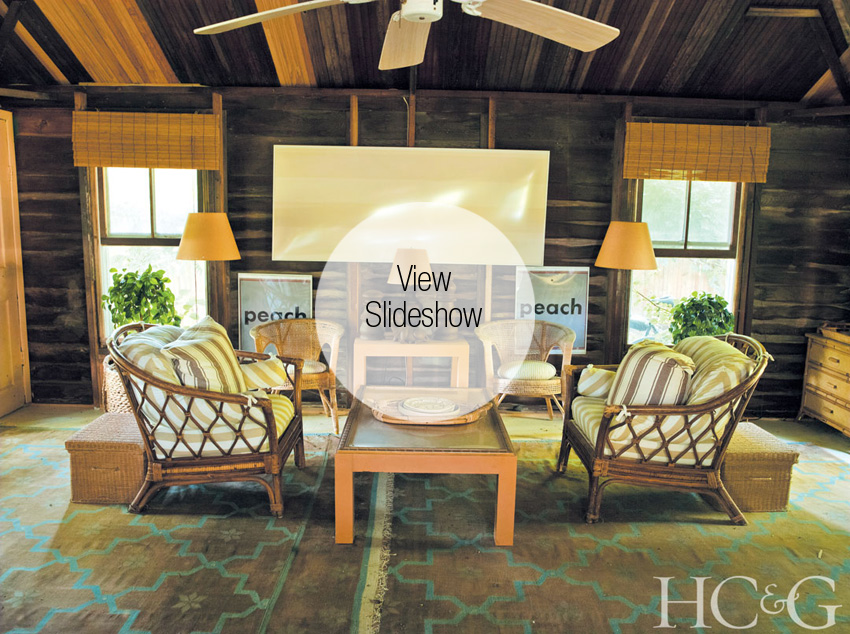 When press agent Joanne Creveling and her husband, Frank Lookstein, bought their 1890 Queen Anne cottage on December 31, 1979, things weren’t looking particularly auspicious for the new year. “The first time we came here after the sale closed,” Creveling remembers, “it was cold and there was snow on the ground. We had brought an artist friend with us who took one look and exclaimed, ‘What a lemon!’”

“It was the darkest house in the world,” continues Creveling, noting that every window was covered in layers of shades, blinds, curtains, and drapes, all of which she promptly tore down. “When you live in Manhattan, what you want in a summerhouse is light.” To this day the windows remain bare.

To lighten the interior even further, she had the walls slathered with coats of milky white paint. “It took 128 gallons,” she says, adding that her overzealous painter actually covered some things she didn’t want painted.

Oh, and the 2,200-square-foot, four-bedroom house, which had been in the same family for 60 years, came fully furnished—right down to the iced tea and demitasse spoons. It was crammed with vintage and antique furniture, some of which is now in use, though far from pristine. Creveling sent several canvas construction bags stuffed with miscellaneous pieces of chairs to a local restorer, who reported that she had enough parts for 18 decent chairs, or ten good ones. She chose the ten.

The dining table, too, came with the house, although its leaves had been repurposed as shelving in a closet. She had a new top made for the old table and slipcovered all the upholstered furniture in 100 yards of fabric from British Khaki, one of her clients at the time. Living room tables came from the closing sale at Bonwit Teller on Fifth Avenue, around the corner from Henri Bendel, where she worked for many years before opening her own firm, which has specialized in representing fashion and home design clients. (Though Creveling thinks of herself as a non-glamorous individual, she is no stranger to the Manhattan high life and remembers lunching with Andy Warhol and kicking back with Halston, Baby Jane Holzer, and designer Angelo Donghia. A stunning portrait in the stairwell is a testament to her striking beauty and formidable presence.)

Working on a limited budget to furnish the house, “I tried to find things that look like they belong here, like they might have been here all along,” says Creveling, who mostly shopped locally for vintage and antique pieces. “In the ’80s, the North Folk had all these fabulous shops, and no one was going to them.” During this era, Creveling began collecting the menagerie of stone, concrete, and wood animals that inhabit virtually every room. Hanging on the walls are a variety of vintage prints and maps. For $20, she bought a huge collection of nautical charts that had been rolled up together in a shop corner. They had belonged to a sea captain and cover the coast from New York Harbor to the East End.

The house sits in an area known as the Grove in Shelter Island Heights, a designated Historic District. Virtually every home in the area was built before 1900, for the most part modest in scale. The cottages were constructed without kitchens and used primarily by the children and staff of the wealthy couples who stayed at the Prospect Hotel nearby. Meals were delivered by pony cart.

Today the home is both down-to-earth and uniquely chic. Creveling designed it to be used, and her family, which includes her two sons and four granddaughters under the age of six, spends most of its time on the screened porches and outside. They refer to the living room at the front of the house as “the passageway” and often wind up in the library, some on each other’s laps. “People seem to gravitate to small rooms,” Creveling says.

These days the kids and other visitors spend a lot of time in the guesthouse, which was built in the 1930s as a garage and boathouse. It, too, was filled with furniture when the Looksteins moved in and later turned into a playhouse for their children and their friends when they were growing up. Little else was done by way of “renovation,” so the vacation homestead remains in almost original condition, though the master bedroom was once two bedrooms, and there is now a kitchen, of course.

That kitchen is painted a shocking red, a real jolt of color in this serenely pale retreat. The idea came from the same friend who had originally declared the home a lemon. He and Creveling were on the train from the city, leafing through an issue of The Magazine Antiques that featured a Dutch kitchen with the same palette. He argued that the kitchen of her cool, calm, and collected house should be vibrant red and yellow, and kept ordering cocktails until she agreed that it was a good idea.

The kitchen has always been heavily used. “I love to entertain here,” Creveling says. “I think summer is such a great time to try all kinds of new foods. We have people over for lunch constantly, and dinner. And one of the best things about living on an island is that when you have a dinner party, the guests can’t stay too, too late, because the last boat is at 11:45.”

A version of this article appeared in the August 1 2013 issue of HC&G (Hamptons Cottages & Gardens) with the headline: Victorian Beauty.