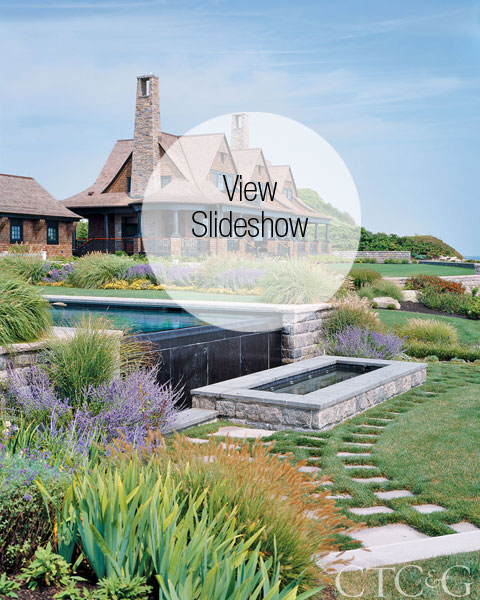 As the Connecticut shoreline wends its way north—from the Gold Coast through urban knots and scenic villages—it shifts and softens until it yields to rocky beaches and Rhode Island’s fabled resort towns. It’s on this stretch of shoreline that a Greenwich couple searched (for 30 years!) for the quintessential New England cottage, a classic vacation home.

They finally found it on a stunning waterfront lot in 2004—and promptly set to renovating the existing grand dame of a home. After a while, they called in an architect to design a charming guesthouse to replace a small, rather unappealing structure that had to be torn down. The new Shingle-style house would honor the vernacular architecture of the area, but it would be up-to-date in all ways. It would provide guests every modern amenity, says the gracious wife.

“Above all, we wanted to maximize views, and create rooms where people could gather,” she remembers.

As it happens, the architect—Arthur Hanlon of Shope Reno Wharton Associates in Norwalk—did such a good job that the couple decided to keep the new house for themselves. “It’s just so uncomplicated, and so easy to live there,” says the wife.

“The clients wanted a small shoreline home, built near the existing house, with walkways to link them, and a pool between them, facing the water,” says Hanlon. “They wanted a wraparound porch, gables and dormers, all the trappings of the Shingle style—with an open, livable plan.”

The lot presented challenges—from zoning to FEMA constraints—that resulted in design limitations. Creating an architectural model helped.  “As much as clients understand—or try to understand—scale and volume, a model is invaluable,” says Hanlon. “Bring it out to the site and plunk it down, and see how the sun moves around it.”

In this case, regardless of orientation, they all knew that every view would be extraordinary.

Polished and stately but relaxed, the dormered home is sited close to the water. Still it feels safe, sheltered by the iconic porch embracing it on three sides. Classic contours complement the archetypal shingles that define the house from the bottom up. Substantial columns ground it, while elegant trim details stand out on windows, railings and roof brackets—all painted black forest green. Whimsical touches include spheres within the railing design.

“I like to call it interpretive traditional detailing,” says Hanlon.

Meandering flowers and gardens dot the property between the houses, and around the perimeter of the lot. Ornamental grasses and flowering shrubs hug the fieldstone wall that divides the land from the sea. Landscape design was by Katherine Field and Associates of Newport.

It’s a simple home in plan, and small by area standards. It’s L-shaped, with an open kitchen/dining area, a living room and media room in between, on the long side. A side entry, mudroom and stairwell comprise the short side, which also opens to a library in the round.

Nautical details abound—from curved ceilings paneled in shiplap style to polished finishes, white against high-gloss wood. “The home features many of the details you would find in a luxury vessel,” says Hanlon. Decked out in the finest mahogany, the library, which is 13 feet in diameter with a 16-foot ceiling, takes its inspiration from luxurious Hinckley yachts.

Lighting fixtures evoke ships’ cabins; even the newel post at the bottom of the stair calls to mind an abstract lighthouse (it’s wired to illuminate the hallway). Hanlon designed the custom cherry cabinetry in the kitchen, where at one end, the island opens up to create a buffet space. Boldly trimmed windows sport Roman shades only; they offer privacy and shade when necessary and yet don’t obscure the details or the view.

Furnishings are finely crafted, but simple. “We wanted the interior to be as comfortable as possible,” says the wife. “We wanted a place where we never worried about children spilling or anyone putting their feet up on the couch.”

Like many houses in seaside communities, this one is sited in close proximity to others. But being visible from the road doesn’t necessarily compromise its beauty. Quite the contrary, says Hanlon: “This home—and the unparalleled views beyond—can be appreciated by all who pass by.”

A version of this article appeared in the June 2011 issue of CTC&G (CTC&G Cottages & Gardens) with the headline: A Sea Change.

The 3 Essentials of Teak Furniture You Need to Know