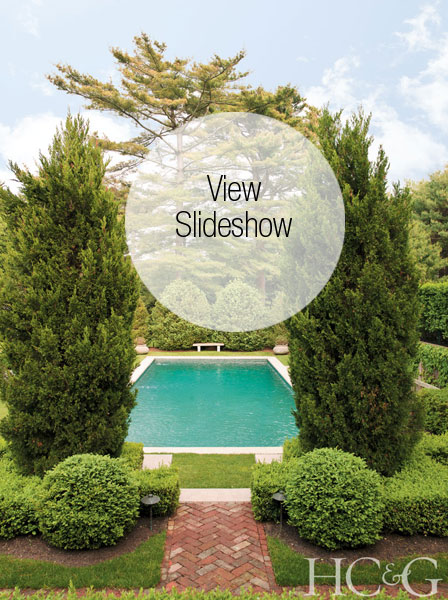 Tim O’Brien’s nostalgic retelling of his first encounter with his historic Shinnecock Hills home sounds more like the opening of a novel than a routine real estate visit. “I remember the beautiful October afternoon like it was yesterday,” recalls the financial asset manager, who insisted on seeing the abandoned estate—one of only five remaining original “summer cottages” in the area—despite plans to tear it down. “The driveway was covered with debris, all the trees had been crushed by wisteria vines, and everything was so overgrown you couldn’t even see the house. But there was a certain romance about the place that called to me.”

When he reached the entrance, a huge Dutch door opened to reveal a terrible stench and a warren of rooms with all the original paneling painted in wild pinks and blues. “It was like Grey Gardens, but more raccoons than cats and no Bouviers,” he says. The Realtor pronounced the place “creepy,” but the financier, who had been looking for a creative endeavor outside the financial world, knew he was home: “From the moment I saw it, I knew I wanted to bring it back to life.”

Rumored to have been designed by renowned Southampton architect Grosvenor Atterbury (who developed one of the first prefab housing systems in Forest Hills, and whose own estate was located across the street), the home was built in the 1890s. O’Brien approached the three-story residence with the utmost respect. He gingerly lifted the rotting 100-year-old structure to add a foundation and painstakingly salvaged the paneling and windows. “Not one of the 80 windows was broken,” says the owner. Every pane was sanded, refitted, repainted and reglazed prior to stripping the rest of the ailing building down to its frame.

O’Brien’s decision to settle in the East End came after years of dividing his time between New York, Brazil and Switzerland, where he honed his European-inflected sensibility and became an avid collector of mid-20th-century art. While he kept his tiny Manhattan digs spare, he filled his two apartments in Rio and São Paulo with local furnishings and antiques. “I loved going to these small Portuguese villages and buying beautiful old Brazilian furniture for my modern apartments,” he says.

Many Brazilian pieces, such as the 19th-century dining table that seats 16 and the artwork that fills the library walls, along with assorted discoveries from his world travels, eventually found their way to his Shinnecock home. Over the years, he added items from area antiques stores, flea markets and yard sales. An example of his come-what-may style: An array of framed battleship and cruise-ship pictures hangs in the sunroom, where a set of classic Mies van der Rohe leather and chrome chairs is paired with a 19th-century wicker settee. “I combine different eras, different materials and different countries,” he says. “If you love each piece, somehow they all fit together.”

When it came time to revisit the four-acre property, O’Brien collaborated with Edwina von Gal—known for her landscape work with Calvin Klein and Richard Serra—to devise a plan that made sense with the architecture.

“I wanted to keep it simple and create outdoor rooms that provide places to rest and sit, while connecting to an overall plan that flows from one area to the next,” says the homeowner, who included a parterred garden centered around four mature apple trees, each framed by a clipped boxwood hedge. “Simplicity also meant focusing on a limited number of plant materials to integrate with the extensive woodlands that embrace the property.”

Ten years later, the renovation continued with a 2,500-square-foot expansion that included enlarging the cramped kitchen and adding a family room and master suite, bringing the house to 8,000 square feet. “I was very apprehensive because I knew I had to keep the integrity of the materials,” says O’Brien. He tracked down reclaimed chestnut in North Carolina to replicate the board and batten in the living room and took measurements from a neighbor’s diamond-pane windows to get the new window dimensions just right. “It needed to look like it had been there for a hundred years, and it does.”

A version of this article appeared in the August 15 2011 issue of HC&G (Hamptons Cottages & Gardens) with the headline: Shinnecock Revival.