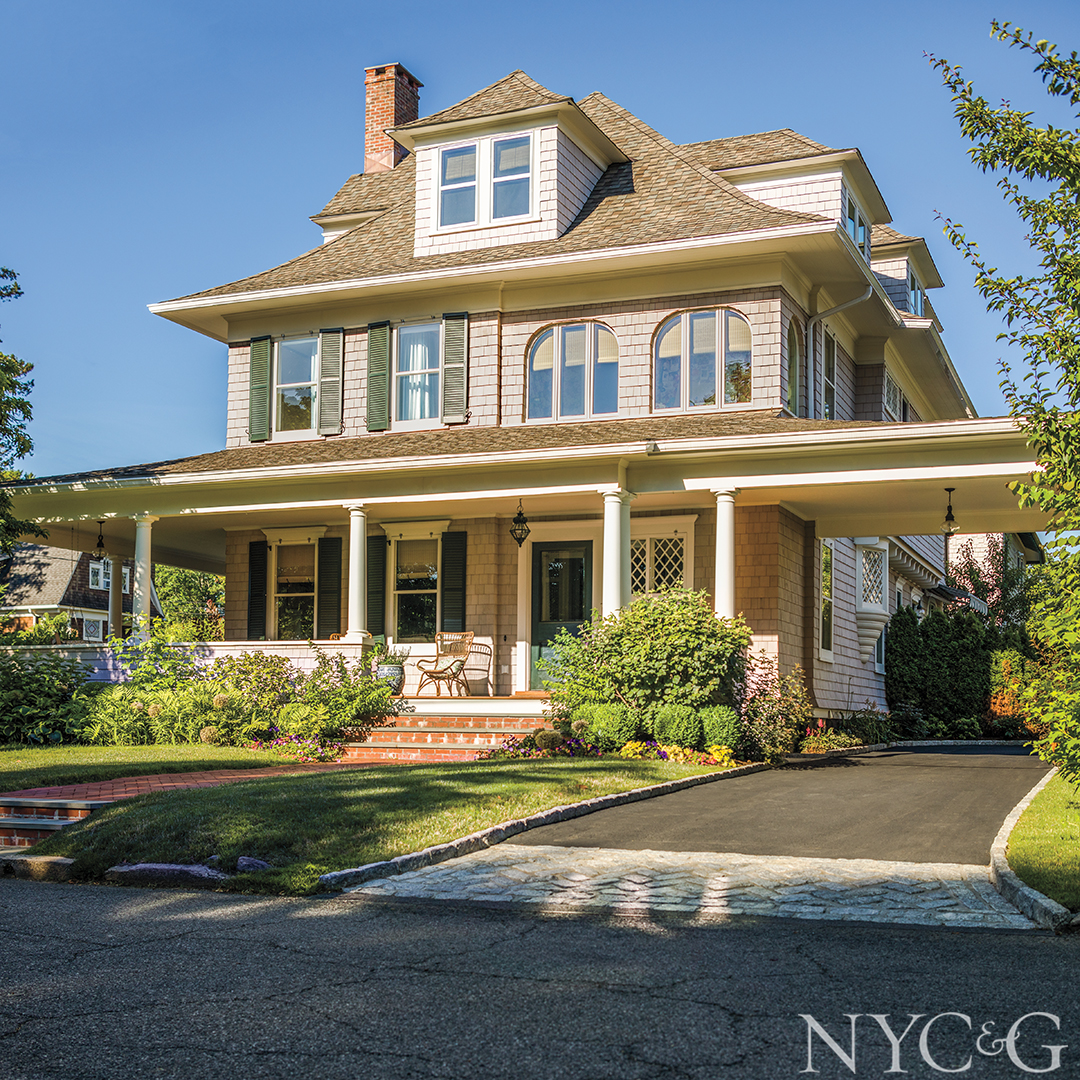 The house up the block had been calling to me for years. A century-old Victorian, it was covered in fading mint-green asbestos shingles and a patchwork of mismatched black roofing. Five old-school TV antennas listed from various perches along its many dormers. Parts of the wraparound porch and carriage house were visibly rotting, and the small yard had been mostly paved over. The only sign of habitation I ever saw was the flickering blue light of a television in an upstairs bedroom at night.

And yet, the house wasn’t downcast. In fact, it had, what seemed to me, an indomitable sense of humor: There was a waffled bay window that reminded me of an upside-down ice-cream cone and a merrily raised eyebrow window tucked into the eaves. The roofline had a vaguely Japanese-Craftsman upturn, like a wry smile. A second-floor sleeping porch featured three arched windows—a whimsical peekaboo cutout in the house’s otherwise traditional façade. 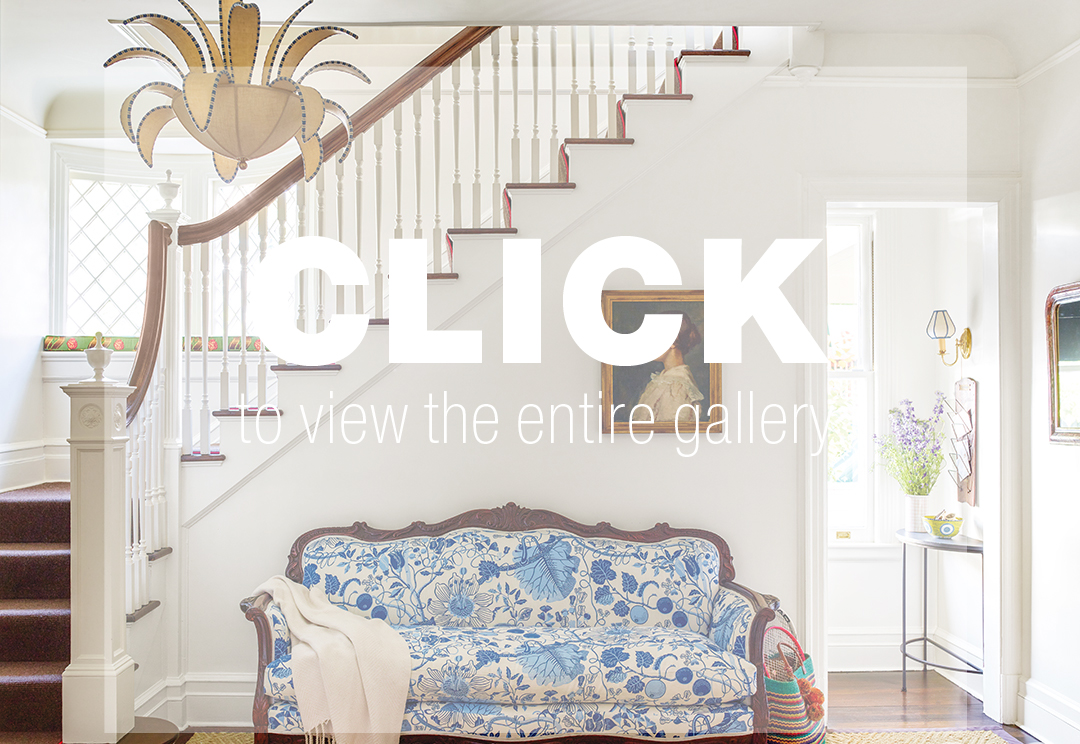 As a girl, I’d always loved books set in houses with secrets—The Lion, the Witch, and the Wardrobe and The Secret Garden—and dreamed about living in such a home one day. The Green Monster, as my husband and I affectionately called the old wreck, looked like a place that might contain magic. So I slipped a note into my elderly neighbor’s mailbox, asking her to call me if she ever thought about selling.

The call finally came—with serendipitous timing, since we were soon to find out that we were expecting a fourth child and would be needing a bigger house. And then the first thing we did was place a call to our decorator, Robin Henry, to ask her to take a look before we made a formal offer. This would be our third project with Robin, whom I’d met through her husband, a writer I had worked with at Elle. Our first collaboration was the small Colonial we were living in at the time. We had moved to the suburbs with little more than a coffee maker and a crib, which was about all our shoebox apartment in Manhattan could accommodate, and Robin quickly created a cozy family home. (It was her first solo project after venturing out from beneath the wing of her mentor, designer Katie Ridder.) She later turned our weekend getaway in Litchfield County, Connecticut—which my husband and I bought when we first married and never got around to decorating, aside from a few cast-offs from his bachelor pad—into a Bloomsbury-esque fantasy escape, complete with a gorgeous Matisse-inspired floor mural.

In Robin’s assessment, the Green Monster “was a gorgeous house, but it wanted to be something different. It was ready.” The design scheme we came up with—which I can only describe as a mash-up of Downton Abbey by way of Japan in a mid-20th-century spaceship outfitted with my grandmother’s furniture—is pure Robin. Her ability to mix and layer colors and pieces from different eras is a form of genius. And I love watching her assess paint samples: She leans back, and then steps closer. She squints. Next, she opens her eyes wide, as though she’s trying to force more of the color into her eyeballs, before making her pronouncement. Most important, she brought out the best in the house, adding lacquer to a shabby plaster wall and hanging Venetian chandeliers from the lofty curved ceilings in an effort to amplify “what’s beautiful and special about each room,” she says. “You don’t need fancy, expensive furniture to make a space come alive.”

Robin deftly accommodated our personal tastes as well. My husband and I love Swedish design, so when we unearthed a defunct cooking fireplace behind some drywall in the kitchen, she designed a variation on a kakelugn (a Swedish tile stove) that blends seamlessly with the English-Japanese-spaceship-Grandma mix. Robin knows we don’t like to designate rooms or furniture as “off limits” to the kids, so she put polypropylene indoor-outdoor carpet, cut and sewn to look like tatami mats, in the living and dining rooms. They have withstood face-planted plates of spaghetti and meatballs (the kids) and spilled glasses of red wine (me) and still look as swell as the day they were installed.

Most of the architects and contractors I consulted decreed the house a complete gut job, but Robin had the courage not to tear everything out and undo the Green Monster’s quirks. We discovered long-unused pocket doors in the entry hall and living and dining rooms, as well as swinging doors between the dining room and kitchen, and restored them all. We left a door connecting my daughters’ rooms, although doing so made the furniture plan less than ideal (but now they play together on Saturday mornings and let us sleep). Robin also created the world’s most stylish mudroom right in the entry hall, rather than carving space from the kitchen or McMansioning the house’s footprint into the already petite yard.

Just as good fences make good neighbors, the ability to close doors makes for a happy family. With an open plan, Robin argues, “very few design gestures can be made. Old houses like this one demonstrate an understanding of family life, built up over generations. They are filled with wisdom and logic—and magic, too.”

A version of this article appeared in the March 2019 issue of NYC&G (New York Cottages & Gardens) with the headline: Lively Revival.

Look Inside a $13M Waterfront Home in the Hamptons