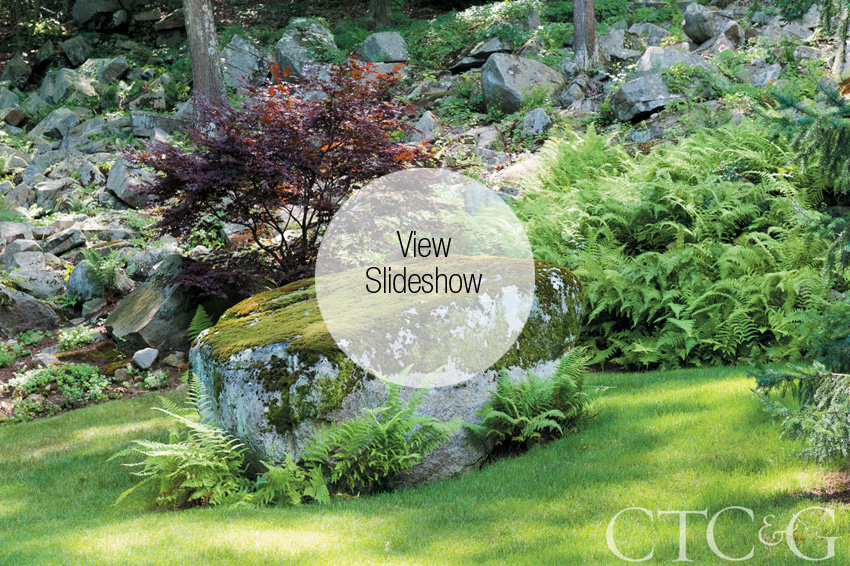 When Ken Stiles and Rick Angiollo gave up the hunt for a house and started to search for land instead, they found a heart-halting eight-acre parcel just a stone’s throw from scenic Lake Waramaug. Except, there was one little hitch. The New Preston property was a pile of boulders that would give Barney Rubble pause. Rather than reconfiguring the place, Stiles and Angiollo opted to let it be and glorify what they were given.

On more rational days, they saw that the perfect spot for a house was down by the road beside the gurgling brook. In the three years between purchase and construction, they put up a tool shed and commuted from the city. “We would ride back to New York City and arrive at our apartment in muddy jeans. We were in heaven,” Angiollo recalls.

As the new owners continued to visit Litchfield County on weekends and camp out on their newly purchased heap, they warmed to the rocks. “We liked the rough and tumble,” Stiles confesses. So they went for a commanding view from the summit. When they finally broke ground, their little bit of badlands had grown on them to such a degree that they could barely allow any of the precious boulders to be displaced.

For the home’s structure, they coupled antique barn siding with antique hand-hewn beams and married the two elements together with an open floor plan offering all sorts of amenities. Both Stiles and Angiollo are principals of their own company in the hospitality industry, so they know exactly what they need to live comfortably: Big showers and large closets are key.

From the get-go, the home’s floor plan included outdoor areas. A lounging porch has grilling and serving stations. A front patio skirts the house, and a huge porch with a panoramic view overlooks the rocky landscape. Any stone that was disturbed found a niche elsewhere, such as the rock chaise and the split-rock doorway leading up to the house, as well as the rock reverentially illuminated like a sculpture near the front door.

Convincing plants to settle in comfortably was a challenge. But they found the answer by going native. And when a plant worked well, they installed it in quantity. In nature, you can’t have too much of a good thing.

Rock gardening, in its truest form, is not for the faint of heart. Angiollo and Stiles were not going to go the arcane or fussy route. Taking a cue
from the Dutch New Wave movement, they planted blocks of color and let them expand, especially along the driveway leading up to the house. Using echinacea, Solomon’s seal, Geranium sanguineum “Album”, rudbeckia, native pachysandra, ferns, and Russian sage in mass, they covered ground and kept weeds at bay. For shrubs and trees, they chose from a native palette of viburnums, dogwoods, aronia, winterberries, and amelanchiers, as well as highbush and lowbush blueberries that serve as accents without stealing the show.

“We put in lilacs,” says Stiles, “but we took them out—they looked out of place; they just weren’t natural.” Ditto for the spiraea. As for the cotoneaster that forms a skirt around the base of the incline leading to the house—it’s been allowed to stay. “Getting the leaves out in autumn is a bear, but it prevents erosion. We welcome the deer because they keep it low,” Stiles says.

It’s been an evolutionary process. With time, the scene has softened a little. But Stiles and Angiollo are proud to say their property still has a heart of stone.

A version of this article appeared in the April 2012 issue of CTC&G (Connecticut Cottages & Gardens) with the headline: Rock Solid.