Tour a Rustic Summer Home on the Shores of Lake Waramaug 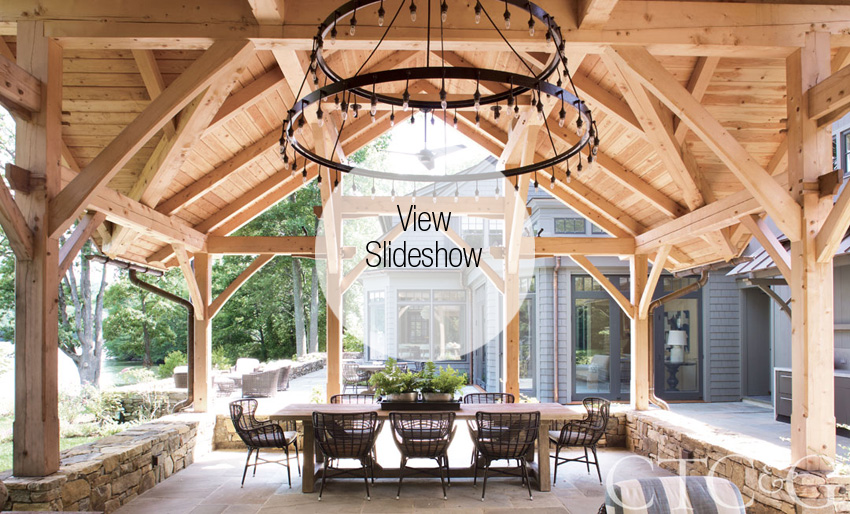 Of the simple wood-beamed pavilion at this rambling lake house perched on the shores of Lake Waramaug, architect Robert Dean says, “It can function truly as an outdoor party room.” Dean, working with interior designer Bettina Routh, transformed this house from a stuffy suburban style into an informally sophisticated house for an incredibly tight-knit family, who also happen to have an incredibly tight-knit circle of friends—the kind of people who’d welcome an outdoor party room.

The owners bought the house for the view, and Dean and Routh were tasked with fitting the house to the family without losing the gorgeous bones of the existing structure. Initially, the clients had gone straight to Routh, hoping for a little help updating the traditional interior into something more fitting their aesthetic—clean and modern—and their lifestyle—warm and casual. One of her ideas was to build the outdoor pavilion, and then, she says, “we realized that we wanted to rework the whole flow of the house.” That’s when she told them they’d need an architect.

Dean and Routh worked closely together on everything while exploring what exactly a lake house can—and should—be. They also explored how to build a house for an active, energetic family who wanted the house to fit multiple scales of occupancy—from just the parents and children, to more than 20 visitors.

“It’s almost like two houses,” Dean explains. One house—the great room, kitchen, sunroom and outdoor pavilion—is where the family comes together, and each room is designed to feel comfortable when occupied with a couple or a crowd. And the other house is the private area, which includes separate bunkrooms and playrooms for the children and their guests, a master bedroom and four “grown-up guest rooms,” as Dean describes them. The kitchen is the heart of everything, and granite countertops at the perimeter contrast with a gray concrete countertop on one island. A second island functions as a place for hanging out. The kitchen, Dean says, is “intended as a place where, on a Saturday, if two people are getting coffee, or if 15 people are making pancakes, it will work well either way.”

Carefully considered windows—a transom line that goes from room to room, giving a “continuous kind of horizontal datum,” says Dean; massive gridded windows that create a clerestory right above that line in the living room—draw the eye outward, toward the lake and trees and beyond the muted interior. Those windows tie in “with a contemporary feel and a transitional feel with the house,” Dean says. Particularly in the main living space, the windows operate as “a gesture toward a more traditional massing, but a more contemporary feel overall.” And that’s because not all the windows are gridded; below those panes is a plane of clear glass windows, which brings in a different type of clarity and modernism (and an uninterrupted view). The great room was “the main feature we kept from the existing house,” Dean says, though they transformed it from what was a dark, mahogany room into its current bright informality.

“The intent is to get a lot of continuity and overall simplicity to everything,” Dean says. Routh brought much of that to life in her furniture and detail selection, and also added tiny pops of color here and there, like in a row of ancient and colorful dustpans that line a hallway; or a hooked rug that covers almost the entire great room floor. “It’s like the biggest rug I’ve ever made,” Routh says. And that’s the trick. The house was built to feel “tailored and not so fussy and to have some humor,” Routh says. Now all they need to do is throw a party.

A version of this article appeared in the June 2016 issue of CTC&G (Connecticut Cottages & Gardens) with the headline: Welcome Party.