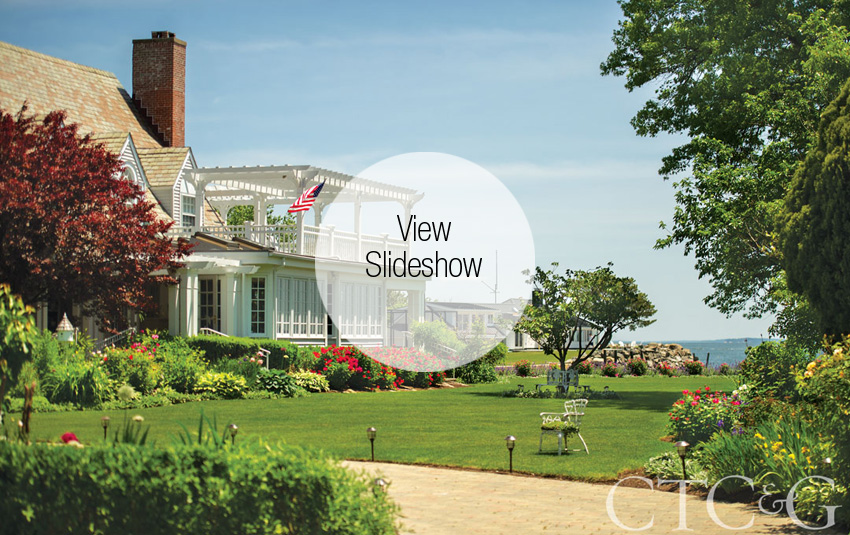 We moved here in 1976,” Chris Thurlow says of her home on the Old Greenwich shoreline. “We’ve held 38 Fourth of July parties here. Our group had kids, and their kids had kids—now we have three generations getting together.” The house itself was built in 1928 on land that formerly had been a swamp. At one point, fill was brought in from a New York subway excavation site, and houses soon sprouted up. Thurlow and her husband, Steve, a former New York Giants running back, lived in California for two years before searching for a residence on the East Coast. With spectacular views across Long Island Sound to Oyster Bay and Huntington Harbor, it was an easy decision to make Lucas Point their new home.

A native of Alexandra, Virginia, Thurlow had thought she would garden as her accomplished mother had done. “But everything died,” recalls Thurlow. “Azaleas, camellias, crepe myrtle—all those Southern favorites like acid soil. They certainly don’t want wind and salt spray, and they didn’t do well here.” Then her mother gave her $200 and told her: “Buy two each of 10 plants, and plant them in different areas of the yard. That will tell you what will survive and where to plant it.”

Trial and error taught Thurlow that gray stachys, or lamb’s ears, thrive along the shoreline. “I have hundreds and hundreds of stachys that all came from one plant my mother gave me,” she says of this velvety groundcover she uses as edging on the garden’s perimeter. “Stachys looks like a necklace around the property. It says: This is where the garden starts.”

If Thurlow sounds like a teacher, it’s because she is. Early on, she attended gardening classes, eventually earning her master gardener’s certificate and performing community work at the Bartlett Arboretum and Audubon Greenwich. And she’s happy to share her knowledge: “People will say, ‘I can’t garden.’ The first thing I respond with is: You decorate your house, planting a garden is exterior decorating.” Thurlow likes to reference Sissinghurst as an example. At that English treasure, Vita Sackville-West divided the grounds into dozens of distinct areas. “You don’t have the same things happening in every room of your house,” says Thurlow. “Yes, the garden has to blend, but every area should have its own personality and function.” In Thurlow’s garden, “rooms” are designed around birdhouses, a cast-iron chair or the moonlight friendly colors of silver and white—another idea gathered from across the pond.

“I’m sensitive to the fact that I live on the Sound. I don’t use anything that could run off into the water,” she says. “All the birdhouses—those are my pesticide. I noticed my mosquito population was going down. We never had any weeds because I had five baskets and two children; if you were mean to your brother, that might be a 200-weed basket, a lie was 400 weeds.” With the garden thriving, Thurlow had dozens of extra plants. “It’s sinful to throw these away,” she says, “so I told all of my friends that my extra plants were up for grabs.”

Then, in December 1992, a huge nor’easter came through tearing up everything in its path. “I didn’t know if I had the heart to do the garden all over again,” she recalls. But soon, a neighbor showed up with 40 women that Thurlow had helped with their gardens. “Each one brought something new and something I had given them,” Thurlow says. “That plum tree was a stick 20 years ago. It was given by four girls, now two of them have passed away. Today, there is a little plaque by each plant with their names; these women are all still with me. As a family we took care of this property.” For Thurlow and her friends, the cycle of giving went full circle, and there are lambs ears all over Old Greenwich to prove it.

A version of this article appeared in the May 2016 issue of CTC&G (Connecticut Cottages & Gardens) with the headline: Growing Cycle.