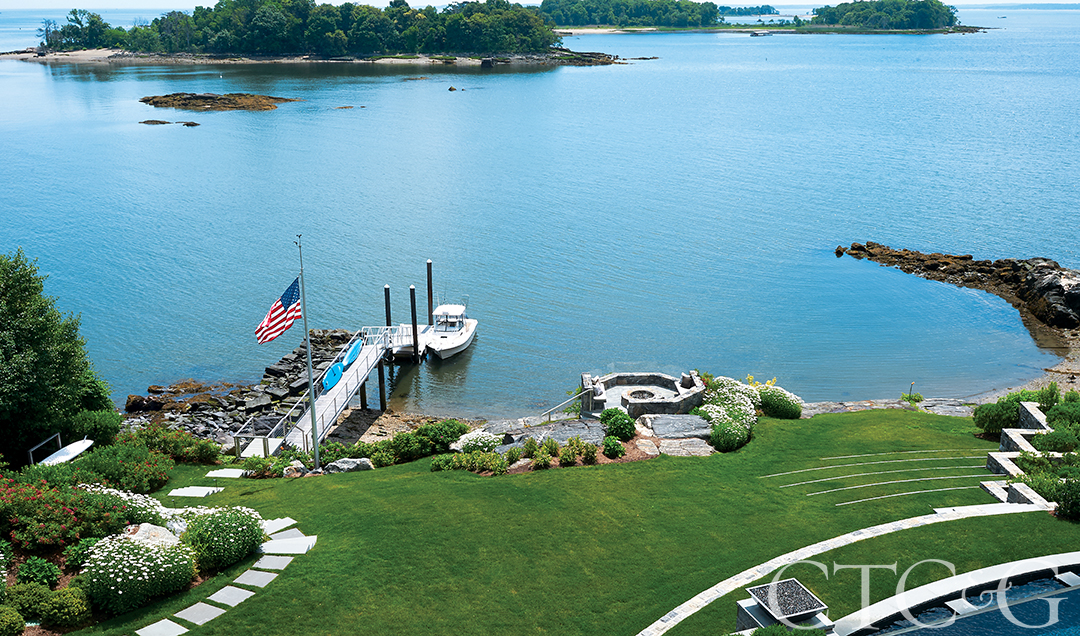 Landscape architect Wesley Stout vividly recalls his first encounter with the then-unbuilt Greenwich estate. Even on paper, it struck him as a rare opportunity: an elevated, two-acre parcel along Long Island Sound with a private dock and waterfront. But walking the grounds in 2011—alone, on a cool spring day—was nothing short of transporting. The open, sloping acreage, the vast sky and the views over the Sound were spectacular. Stout, whose firm Wesley Stout Associates is based in New Canaan, found himself drawn to the dock, where the new owners had already moored a boat. He realized the protected spot created a sun-warmed “solar pocket” and instantly conjured the notion of a kind of carved-from-the-earth fishing grotto he had seen in Greece. Today, he marvels that this flash of inspiration not only made it from drawing board to reality but that it’s an integral part of the family’s life on the water.

Still, as a landscape architect with 25 years’ experience, Stout was trained to see the property’s drawbacks as well. Most obvious was a house next door that loomed large and close. Then there was the sloping land—with the new home site a full 40 feet above sea level—which would require both artistry and engineering to terrace the land in a pleasing and FEMA-compliant way. 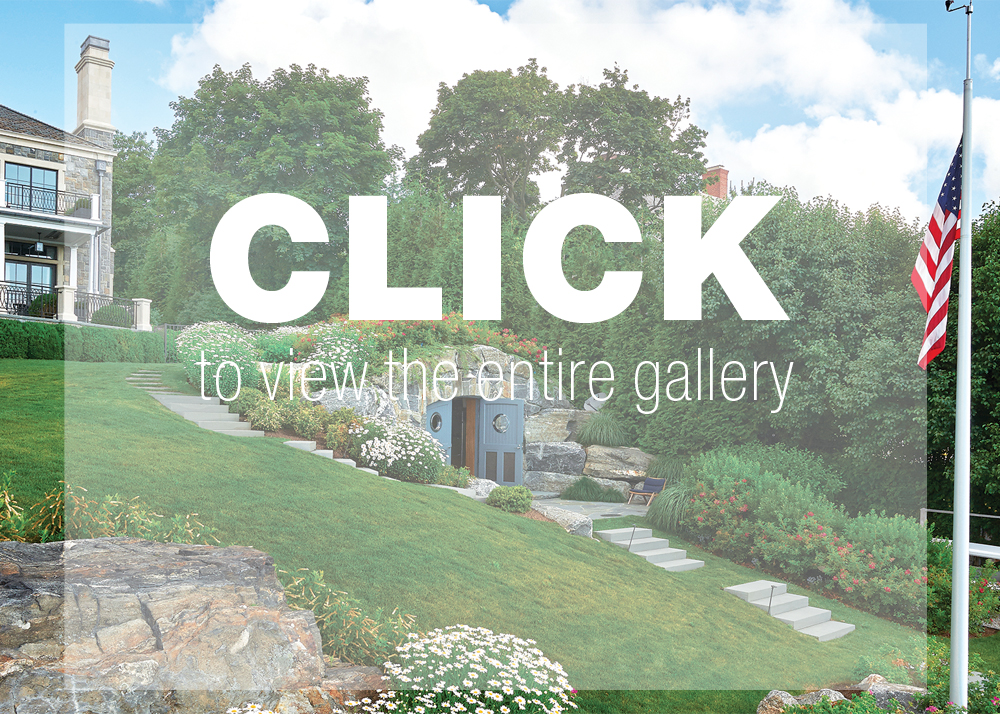 But Stout remained sanguine about the challenges. “Every coastal property is complex in some way,” he recalls telling project manager Cory Jorgensen. “A nearby house is almost par for the course given the value of waterfront property.” He also knew they’d be collaborating with the best in the business, including architects Austin Patterson Disston and builders from Hobbs Inc., as well as their sophisticated clients.

“We try to see challenges as opportunities,” adds Jorgensen. Take, for instance, the ledge rock that had to be blasted away to create the residence. Instead of taking on the Sisyphean task of hauling it all away, the team worked with masons to shape the material into building blocks for the stone walls and other structures throughout property, including a glorious seaside fire pit. The result: hardscaping that looks as if it emerged organically from the land itself—in contrast to stonework that looks stark and raw after installation.

Likewise, the issue of the house next door was resolved in a lemons-to-lemonade way. As a rule, Stout avoids designing “green screens” as camouflage. “A flat wall of cedars practically compels the viewer to wonder what’s behind it,” he says. His lovely, layered solutions are perhaps best enjoyed up near the new house, along an allée of Linden trees that both screens the lot line and frames the view over Long Island Sound—a shady, breezy and green invitation to move toward the water.

Indeed, layering is an approach that’s seen throughout, with spaces and experiences revealing themselves only as one moves through the property. For example, from the dock, the infinity-edge pool and terrace are hidden, with just a handsome stone wall cascading with water visible. And from the top down, the fishing shack, with its green and gardened roof, is invisible. Built with the architectural expertise of ADP, the shack perfectly sums up the spirit of the property, at once useful and beautiful, spare and stylish, and fashioned from the land but made for the sea. And, like all good plans, it solved a problem before the owners ever had it: It serves as a spot to store gear, clean fish and shower off, as well as a wonderful segue between life on the water and coming home.

A version of this article appeared in the June 2017 issue of CTC&G (Connecticut Cottages & Gardens) with the headline: Gone Fishin'.