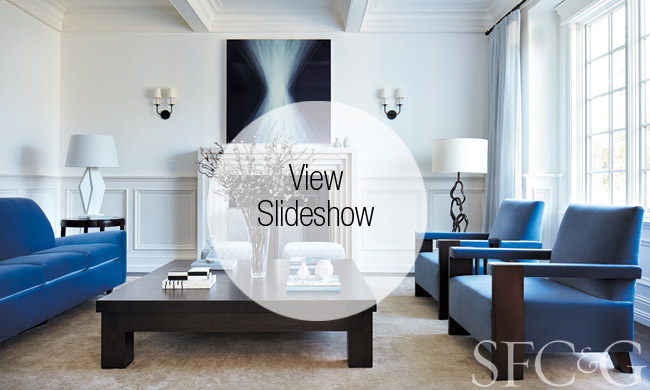 When relocating from New York to California, a couple and their three children were prepared to embrace a new lifestyle. Thanks to San Francisco–based interior designer Heather Hilliard, however, transitioning from a SoHo loft to a Hillsborough estate didn’t mean abandoning their downtown aesthetic.

“The clients have sophisticated, metropolitan taste and were interested in juxtaposing that with the more traditional style of the house,” says Hilliard. The home had great bones, but ornate, outdated interiors: Think green, peach and lavender walls—some with a Venetian plaster finish—and decorative accents like carved wood corbels. Hilliard’s pared-down vision enabled the clients to put their own stamp on the 5,500-square-foot abode. “She created a very peaceful and serene environment for our family,” remarks the wife. “She also did a great job of incorporating existing pieces we wanted to retain.”

Hilliard set the tone of the home in the double-height foyer with a dramatic Bec Brittain Shy pendant. Its brushed brass and LED lights introduce a modern edge, counterbalancing the space’s classic details. The designer also transformed the space by washing it in Benjamin Moore’s Mountain Peak White. Throughout the home, white walls now serve as a backdrop for the clients’ art collection, which includes works by Robert Motherwell, Mark Humphrey and Sherie’ Franssen. “Art is very important to us,” says the wife. “Since we’ve been married, we have not exchanged gifts, but rather, purchased a piece of art together for each anniversary, often on vacation. Each one holds a special memory.”

Hilliard established the home’s signature palette of bold blues in the dining room and living room. “I wanted the rooms to flow and feel like one space,” she notes. Located in the front of the house, the area also receives plenty of bright afternoon light. “We selected the saturated navy and blueberry fabrics to pop in—and stand up to—the sun,” she explains. “And I wanted the colors to have the same tonal value as the beautiful woods of the furniture,” referring to pieces in walnut, mahogany and palissandre.

From the lines of the limestone mantel to the angular elements of the André Sornay-inspired armchairs, the living room is clean and contemporary. “Each piece of furniture is very sculptural on its own,” says Hilliard. “The silhouettes are noticeable when they have room to breathe with adequate space around them. A favorite designer of mine, Christian Liaigre, once said, ‘Sometimes the beauty of a space is the empty space.’ That has always resonated with me.” The Bernadette Jiyong Frank painting above the fireplace, Spaces in Between, was chosen for its minimalist quality as well. “It’s contemporary, but the lines and angles remind me of something that could have been done in the Deco period,” says Hilliard.

In the dining room, the designer juxtaposed a Lindsey Adelman chandelier with the client’s French Art Deco antique buffet, table and chairs. She also reupholstered the seating in a chic horsehair in marine blue, a color that resonates with the 1940s French painting that is the room’s focal point. The blue period lives on in the master bedroom, where celadon tones are reminiscent of the homeowners’ previous residence. “They used similar colors in their New York bedroom, so there was a familiarity,” says Hilliard. “The room also has views of treetops and lush green plantings, so we selected light green, cream and camel colors to reflect that palette.” The custom upholstered headboard, designed by Hilliard, and plush seating add softness and warmth to the large, open room.

It is all part of the balance that Hilliard orchestrated for her clients. “I knew that they were leaving Manhattan and moving clear across the country, so I wanted them to feel as comfortable as possible,” she notes. “Their new home had to be a reflection of who they are, and where they came from.”

A version of this article appeared in the June/July 2015 issue of San Francisco Cottages & Gardens with the headline: Urbane Suburbane.