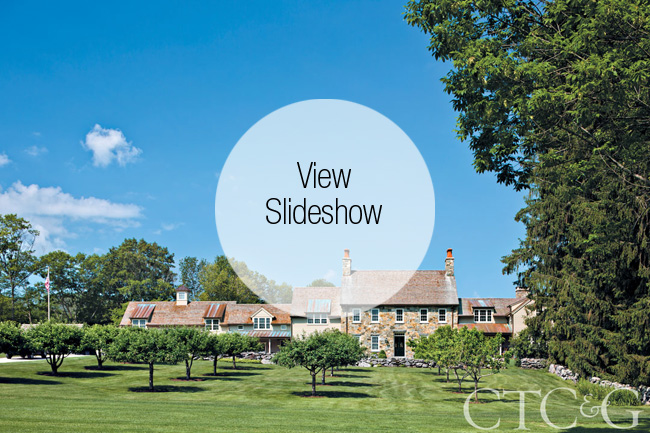 In a world where everyone is a brand and egos abound, perhaps the most groundbreaking motion an architect can make is to create something so subtly nuanced and thoughtfully constructed that it looks like it had no architect at all. Take, for instance, a rambling family compound in Washington, CT, that appears as if it evolved over time. Driving by, one might imagine it having been passed down from one generation to the next, but it is, in fact, the result of Stewart Skolnick’s and Charles Haver’s (Haver & Skolnick Architects) master vision.

The 70-acre farm was “an architect’s dream,” says Haver. “The client had owned the property for a couple of years and wanted a new house. But because it was a large property with multiple farm buildings, we had to site the house and tie it together with the existing structures into a context that made sense.” The farmhouse, built from local stone, was sited at the top of the hill to take advantage of the views. An apple orchard and garden were relocated in the process. “We wanted it to look like it has always been there,” explains Skolnick. “We studied local vernacular architecture and detailed it in such a way that it didn’t look brand new. It’s a very large house, and we did not want it to be overwhelming.”

A mix of different materials helps break down the scale of the structure. The wings of the house are clapboard while other areas are shingled; the bulk of the roofing material is wood shingles, while the dormers and the porches are copper. “It looks like it grew organically,” says Haver. “We wanted something easy, natural and not too formal.”

The farmhouse melds seamlessly with the property’s 18th-century barn buildings, which the architects also transformed: A hay barn became an entertainment space complete with a pub, theater, billiards room and arcade; a shed was refurbished as a guesthouse. The extensive site and landscape work result in a scenic farm with a winding driveway leading past maple trees and a chicken coop opening onto a courtyard surrounded by barns. Continuing on, the driveway curves through an apple orchard and climbs the hill to the farmhouse and walled gardens.

Inside the home, antiques and a warm palette of historically inspired paint colors and fabrics create a relaxed atmosphere. “We wanted it to feel comfortable and cozy,” says Haver. “We had to make sure the scale of things wasn’t too large. We created intimate seating areas and used soft chenilles and cottons on the upholstered pieces.” The warm palette radiates from the kitchen, painted a deep red, not unlike the red seen in barns around the state. Directly off of this room is the high-ceilinged family room. “Cathedral ceilings can be very unfriendly and make people uncomfortable,” says Skolnick. “We used antique timbers as roof rafters and horizontal collar ties to visually and physically bring down the room.” Touches like folk art found in New England—a red pig that was once part of a barbeque sign, a carved rooster, an old barber pole—and outdoor barn lanterns used inside create a warm and rustic feeling that mimics the rest of the house’s informal and cozy feel. “The challenge was making it feel not old-fashioned,” says Haver. “We used antiques throughout, but it’s very clean in its layout and not overly furnished. We wanted to do comfortable, but without that stuffed feeling.”

“You have all these functions you want to fit on a site, but you have to make sure it is not overbuilt,” notes Skolnick. “We really tried to pull back and make it look understated and like it has always been there.” Adds Haver, “The property was already beautiful and magnificent. All we did was help it along.”

A version of this article appeared in the November 2015 issue of Connecticut Cottages & Gardens with the headline: Compound Interest.