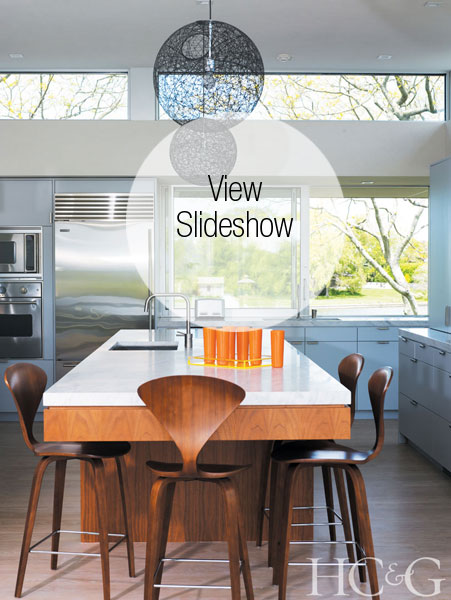 If any locale in the world could really test the limits of sibling rivalry, it would probably be the Hamptons. Take the case of two brothers in Water Mill, just three years apart, but as different as brothers could be. The elder brother, a bachelor, had been summering at his spread on Flying Point Beach in Water Mill, and the happily married younger brother, a private equity fund executive, became a frequent houseguest with his wife and their three children. Eventually the younger brother opted for a place of his own, a 1980s rambler on nearby Mecox Bay. But the site wasn’t oriented toward the sun, and it was indifferent to views of Myers Pond. After four years, the time came for dramatic action, since both brothers simultaneously decided to undertake complete overhauls on their respective homes.

The men thoroughly grilled a handful of architects, and each ultimately commissioned Bridgehampton-based Stelle Architects. “They came in as a package deal,” jokes partner Michael Lomont, who tore down the younger brother’s rambler in favor of the luminous new construction seen on these pages. The rebuilt house is now larger, with enormous sliding doors of high-performance glass and an environmentally friendly heating system. For dramatic energy savings, four wells were drilled, so that the family can harvest warmth from local groundwater during the cold months and, in turn, dump excess indoor heat during the summer.

Environmental concerns about protected wildlife habitat on the one-acre property forced Lomont to nudge the new structure a little closer to the street, while local code required any new construction to be elevated. The brand-new windows now look across the private road toward Myers Pond, essentially eliminating any parked cars from the view. In terms of efficiency, Lomont describes the bedrooms as reminiscent of a luxury hotel. He packed them into a two-story wing sited along the property line and overlooking the pool. Its positioning and height effectively walls off the property, enhancing the feeling of enclosure and privacy.

The modern great room and kitchen occupies a one-story pavilion with 12-foot ceilings and a clerestory that splashes the interiors with sunlight. Overhangs shade the big new sliding glass doors below and, just off the kitchen, wrap around the corner of the building to shelter a dining porch under a thrusting 14-foot cantilevered roof. “In the morning, you can hear the swans swimming in the pond and birds in the trees,” Lomont notes.

Such a dramatic structural gesture is made possible by a hidden steel frame. All the exterior flashing is zinc, and the windows are uniformly framed with a silvery, clear-anodized aluminum, something of a Stelle signature. Other materials were chosen not only for durability in the East End’s harsh coastal environment, but also to have a dialogue with it. Wisconsin sandstone precisely recalls the color of Hamptons beach sand, and the same goes for the off-white troweled plaster walls inside. The color is an ideal backdrop for the client’s serene fine-art photography, collected with consultant Wendy Cromwell of Cromwell Art.

Plain-sawn oak floor planks have been treated with a white-colored oil for a driftwood-like effect that seems especially appropriate. “It’s one of those floors that just looks better with wear,” Lomont says. Slats of red cedar siding outdoors have been wiped with translucent stain, a treatment also used indoors on the cedar wall cladding in the stairwell.

If the house seems like something you might find in Malibu, that comparison doesn’t bother Lomont at all. “There’s no question we like that mid-century California feeling,” the architect admits. It turns out both brothers like it too: An army of workers is currently racing to rebuild the elder brother’s bachelor pad on the beach.

A version of this article appeared in the August 15 2012 issue of HC&G (Hamptons Cottages & Gardens) with the headline: Stellar Stelle.