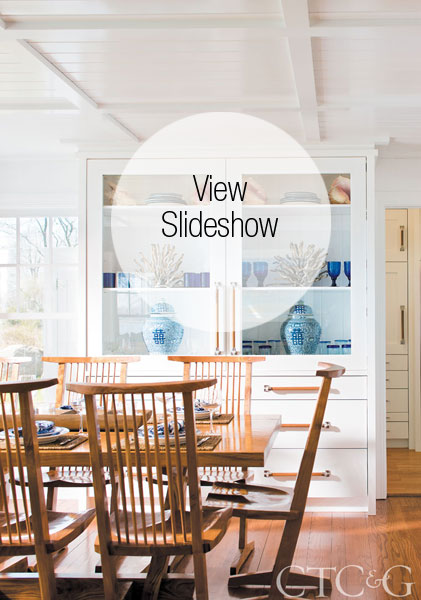 Southport-based interior designer Susan Helie and her husband, Peter, spent four years searching for the perfect place in Stonington to build their dream home. When their broker took them to see the shingled gambrel-style cottage on the tip of Wamphassuc Point, Helie didn’t even bother to go inside. It wasn’t the house that interested her, it was the setting: The two-acre property looks out across Stonington Harbor and the town’s historic district all the way to Watch Hill Lighthouse and beyond.

“The property was so overgrown and the house so tired, I figured it was a teardown,” she recalls. Her husband, the chairman of Prudential Connecticut Realty, urged her to reconsider. “He said, ‘Susan, think of the layout. What does it remind you of?’”

Beneath the dated interior (Formica counters, yellow Jacuzzi tubs, track lighting and lots of bookshelves), the 1980s colonial was essentially a pared-down version of the dream house she’d been sketching for years. “It had great bones,” she says. “You could see the potential.”

The couple wanted an easy house, a place where they could escape their busy daily lives. They decided to work with what was there instead of starting from scratch. “We are empty nesters,” she says. “We have done the big house thing.”

While she liked the existing layout—master bedroom on the first floor, high ceilings, harbor views from every room—Helie wanted to play up the waterfront setting even more by creating an open floor plan. First to go were the narrow entry hall, a built-in bookshelf by the stairs, and the dated kitchen and fireplace. By the time she was finished, “there was not an original door, wall or fireplace in the entire house,” she says.

She hired Stonington-based architect Michael McKinley to help bring her vision to life. “We supported Susan’s design talents and enabled her to develop the interior according to her dream,” says McKinley. “She had some special conceptions that needed to be thought out and put into place.”

Among them: figuring out a way to put rectilinear recessed lighting in the square panels above the custom teak Balinese dining table, and how to widen the front door without throwing off the proportions. “The design bar was high,” says McKinley.

To keep the look fresh and contemporary, Helie painted the walls a Benjamin Moore white. “When you come inside, I want your eye to just shoot straight to the water,” she says.

In the living room, French doors open onto a porch; a wall of windows curves to the left and butts up to the fireplace. Here, too, the architect worked his lighting magic. “We didn’t want to bring in major fixtures,” he says. “So we came up with a trapeze concept with lights that cross at three different levels.” During the day, they are virtually invisible; at night, they illuminate the fireplace, and two of the couple’s prized paintings on the opposite wall.

“The basic premise of this house is that it’s dog-proof,” says Helie, pointing to the navy blue velvet-covered couch, which hides dog hair and the white leather Italian armchairs, which she can wipe clean with a damp cloth. Accent pillows and hand-woven Gabbeh area rugs from Iran provide pops of color.

For the kitchen, where space was at a minimum, Helie selected large navy blue subway tiles from Waterworks. “I wanted to do something dramatic,” she says. Project manager Tom Taylor came up with the idea of glass shelves and a microwave oven in the drawer. The lighting above the kitchen island is practical but unobtrusive. Helie knew she wanted something special for the cabinet hardware but when the cost proved prohibitive, she designed her own. “I got chrome boat stanchions and dowels from a hardware store, and when I showed them to my contractor, he said he could get teak dowels and stain them. And then he cut the handles to all different sizes,” she says.

It took five months to complete the vacation house transformation, and her husband’s advice has more than paid off. “As soon as I get past New Haven, my blood pressure goes down a zillion points,” Helie says.