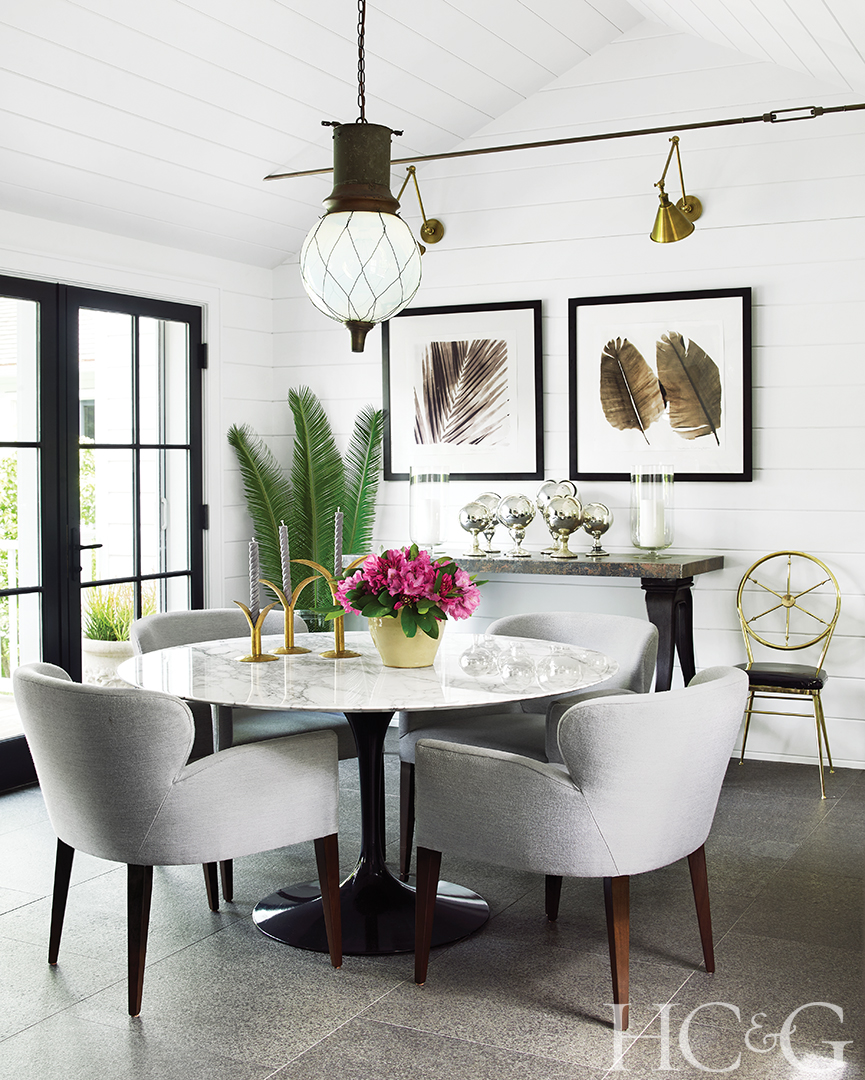 When Michael and Mary Ann Cinelli were writing their next real-estate chapter, they envisioned downsizing from their three-story 1850s home in the village of Sag Harbor, where they had lived for 16 years, to a single-story cottage with plenty of greenery and privacy. Fortuitously, they got all that and more: an oasis in nearby North Haven with the added bonus of being located down the street from their son and grandchildren. A real-estate agent at Brown Harris Stevens, Mary Ann has seen her fair share of stately manors, but the “shabby-chic cottage,” built in 1940, caught her fancy. “It was a charming weekend house that we decided to update to a full-time residence,” she explains. The plan: modernize the interiors, add a wing containing a guest suite, and maximize the property’s potential, creating a sort of courtyard that surrounds the pool and a charming fishing-shack-like pool house.

The interiors evolved with the help of designer Jack Deamer, a good friend who, along with the Cinellis, describes the project as a joyous process during which all three developed a decorating shorthand. “Michael and I have renovated many houses over the years,” says Mary Ann, “so we knew what we could do here, and we knew we had Jack to make it gorgeous.” Deamer immediately grasped the couple’s design directive. “It’s a cottage,” he says, “and it doesn’t have to be anything more than that. I made it tight and uniform and tasteful. Grand doesn’t have to mean expensive and overdone. I love this house.”

A continuous color scheme unites the decor. Benjamin Moore’s Sidewalk Gray and Dior Gray complement the unfinished granite floors (not to mention Deamer’s poodle, Charlie, who visits regularly). “I kept everything consistent with black and gray and white and tried to pop in some color here and there,” Deamer says, adding with a laugh, “Mary Ann and Michael like a little color.”

The front entry opens onto a multiuse dining area/foyer punctuated by a Saarinen table and surrounded by custom chairs. French doors on the opposite side of the space extend outdoors to the expanded patio, pool, and verdant garden. The continuous V-groove shiplap walls lend a nautical air, underscored by a Gio Ponti Compass chair and sailing cleats used as handles to hidden closets. “There’s not a doorknob in the house,” Deamer says of the boating motifs employed here and in the rest of the cottage. 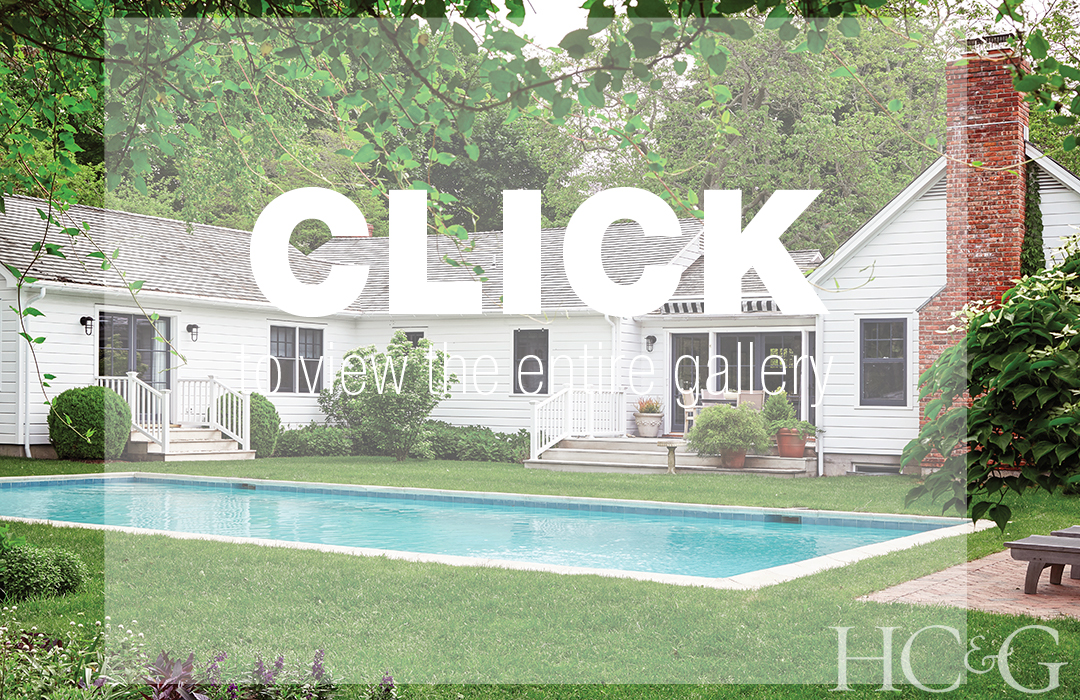 Most rooms in the home spiral off the central dining area/foyer, including the cozy living room, which features a wood-burning fireplace accented with a custom iron screen by local artist Robert Mojo, who also fabricated the Deamer-designed ceiling fixture in the guest suite. But the space’s undeniable highlight is a hulking railroad traffic mirror that Deamer found in Belgium. “It’s wonderfully mottled and reflects candlelight in the evening,” says the designer, who intentionally positioned mirrors high on walls throughout the home more to reflect light than one’s own image. Fabric on the walls makes the space even more welcoming, an essential component for Deamer, who recalls that as a child he was never allowed in the formal living room. “You want a museum? Then go do that!” he jokes.

Mary Ann describes the master suite as “a cocoon,” where bedside lamps are tucked into niches and even the television descends from the ceiling in what Deamer calls a “007 moment. The room is like a ship with everything built in. And the braided rug is typical of cottages [of the era], but it also feels modern because it’s just white and black. Think updated grandma.” The modern kitchen and adjacent den are anchored by wheel-shaped RH light fixtures, which Deamer kitted out with cylindrical lightbulbs. Beyond this space lies a hallway leading to the new guest wing, actually larger than the master suite, complete with doors that open onto the pool. A whimsical 1960s Abercrombie & Fitch leather seal greets visitors, while a sculptural Adrian Pearsall chair and ottoman beckon further.

All finished and shipshape, the updated cottage is the Cinellis’ future, but it hasn’t lost sight of the past. “The entire street feels like it was 30 years ago,” Mary Ann says. “It’s fun and soothing, and we never want to leave.”

A version of this article appeared in the July 15, 2018 issue of HC&G (Hamptons Cottages & Gardens) with the headline: Second Act.