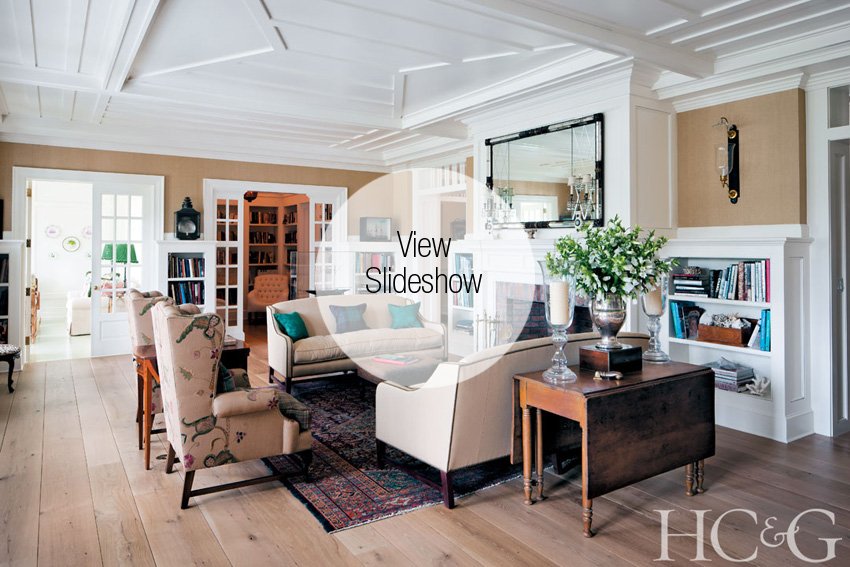 It took just eight months—perhaps a record for the East End—for Jill Lasersohn to go from groundbreaking to a fully decorated, move-in-ready house in East Hampton. “We’d been renting for two years nearby and were desperate to get in,” she says, adding that the rocky economy was an unexpected boon to her construction plans. “In better times, people would drive by and pay our painters money to go work on their projects; they’d hijack our roofers. But right when we were building, so many people were eager to work.”

After stints living in Connecticut and on the West Coast, Lasersohn and her husband, Jack, a medical venture capitalist, moved to the Hamptons to build their dream home. Working with Bridgehampton’s Barnes Coy Architects and builder Ben Krupinski, the couple created a “true East Hampton cottage,” she says. “I wanted something that looked simpler, sweeter, more Hansel and Gretel than McMansion.”

After agreeing, with some trepidation, to let Krupinski build without making any major changes (thereby ensuring her move-in date), she decorated the place just as speedily, with the help of Connecticutbased designer Connie Cooper. “Jack and I knew what we wanted and had to find someone like Connie who’d give me free rein,” she says, adding that Cooper’s style is “more modern, whereas I’ve got tole, pewter, rag rugs. A lot of houses in the Hamptons are summery in feeling, but I’m mad about plaids and tartans and checks.”

To put it mildly, Lasersohn is mad about textiles, period. She studied textiles in college and now has 3,500 pieces and 600 books, many out of print, in her collection. While living in California, “It was sheer boredom, and I had nothing to do,” she explains. “I wanted to be in New York designing textiles or working for a museum.” So her husband suggested that she begin collecting. “He’d go to France for work, and I’d tag along—and go to flea markets.”

Her oldest finds date from the 1300s. “I have medieval and Italian Renaissance pieces, and lots of French textiles from the 17th and 18th centuries, from printed cottons and toiles de Jouy to needlepoint, lace and embroidery.” She stores her formidable trove in acid-free boxes in a temperature-controlled closet in her office, where she often spends 10-hour days studying textile history and poring over fabrics.

The entire house shows the kind of attention to detail and craftsmanship that you’d expect from a textile historian. Fabrics are key elements of the decor, along with vintage and antique rugs and nods to Americana throughout. She even flipped the Rogers & Goffigon linen on the living room sofas, she says, “because I liked the back better—the guy doing it asked me several times to make sure!” Lampshades in the house are custom-made, like the music room’s green shades, which complement the hunter green piano and celadon-painted floor. But the brand-new home is hardly a museum piece. “It’s not Colonial Williamsburg or Winterthur,” she says. “It’s an interpretation of strict Colonial, with a modern twist and softened edges.”

Going against the prevailing Hamptons taste for soaring great rooms, the couple opted for lots of intimate, smaller rooms, with separate sitting areas (one formal, one casual), two dining areas (the large dining room features a stunning custom Stark mural of West Point) and a kitchen divided into a central cooking area, a breakfast nook, a butler’s pantry and a scullery. The latter, an idea borrowed from “the Brits,” she says, came about because “it bothers me when all I can see is that the counter’s not wiped or the dishes aren’t done. I like to dump the dishes, close the door, and go back to our guests!”

The formal dining room ties the whole house together, with oceanic blues in the leather chair upholstery, china and the color of the water in the handpainted mural echoed elsewhere in the house, such as the blue plaid staircase runner and the family room’s painted paneling. “Sometimes I think maybe I should have gone for an open floor plan,” Lasersohn muses. “But a traditional house has smaller rooms; I like nooks and crannies and places to store things. I appreciate modern, but I wanted an ‘old’ house designed for today’s living.”

A version of this article appeared in the August 15 2011 issue of HC&G (Hamptons Cottages & Gardens) with the headline: Fabric of Life.