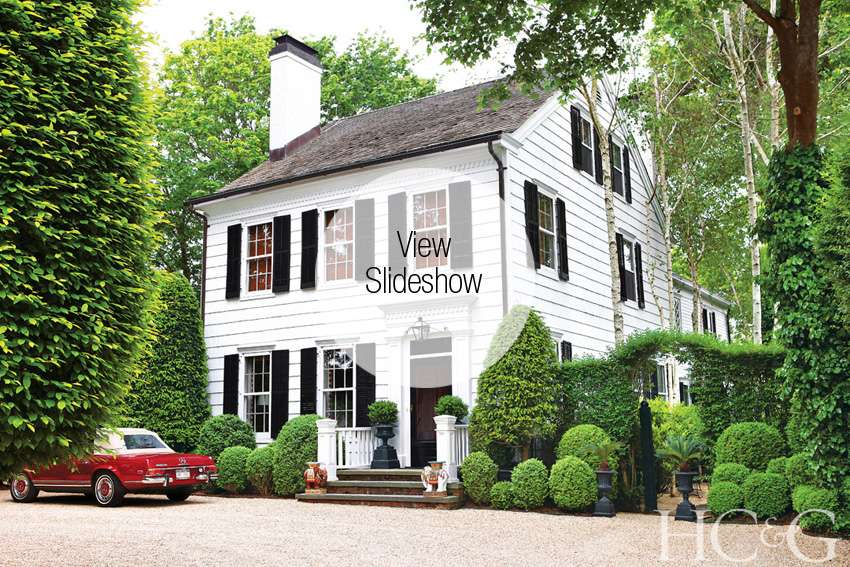 One chilly October morning years ago, Dr. Carver Livingston left his home on Main Street in Southampton to deliver a baby boy at the local hospital. Today that child, Peter Hallock, lives in the same house in which his family doctor had once dwelled.

“That’s how closely knit things can be in the Hamptons,” says Hallock, who has occupied the 5,000-square-foot Federal-style house for 20 years with his husband, Craig Mowry, a technology expert. “My parents used to come over for dinner when Dr. Livingston lived here, and my sisters played with his children.”

The former president of Allan M. Schneider Real Estate—which he later sold to the Corcoran Group, where he is now senior vice president—Hallock can trace his family’s origins in the region back to the 17th century, long before the first privet hedges were planted. His namesake ancestor is reputed to have landed on Long Island’s North Fork in 1640, and he describes his great-great-grandfather, born in 1821, as “Southampton’s first horse-and-buggy doctor.”

The house that Hallock and Mowry occupy on Main Street is a virtual architectural timeline of Southampton: The front part dates from 1790, a rear portion from 1850, and another from 1910. “The house had been moved here from another location in town, early on in the last century,” says Hallock. “When we first moved in, I noticed that the beams and posts were numbered with Roman numerals, indicating that the house had been disassembled and put back together like a giant jigsaw puzzle.”

The puzzle is now complete, with a backdrop of sumptuously planted grounds designed by landscape architect Edwina von Gal, who fashioned the narrow lot into what Hallock describes as a series of discrete outdoor spaces. “They’re like small English rooms,” he says, “not flower gardens, but rather a series of parterred spaces defined by boxwoods and hedges that ultimately lead to the pool.”

As for the interiors, Hallock was intent on decorating them himself. “I didn’t want the house to look decorated,” he says. “I just don’t like walking into someone’s house and knowing right away who the decorator is. I prefer a ‘traditionally eclectic,’ personal style. When it comes to decor, if an object or a piece of furniture really appeals to you, then somehow it will work in the overall scheme.”

In this case, the scheme was extensive: Hallock and Mowry left virtually no surface untouched. Upstairs, the couple replicated the period moldings, paneling, and chair railings that define the rooms downstairs. A bedroom adjacent to the master bedroom was converted into a master bath. Left alone were the home’s six original fireplaces, which—aside from the house’s great location, a ten-minute walk to the beach—was “why we bought this place to begin with.”

Hallock’s passion for eclecticism is particularly apparent in the couple’s various collections, displayed throughout the house in extravagant assemblages. In an upstairs hallway, shelves are filled with 18th- and 19th-century majolica plates and urns, cups, and saucers. Elsewhere is a display of green enameled parrots that once adorned Chinese rooftops. (“The birds symbolize good luck,” Hallock says.) And on nearly every wall hang salon-style groupings of artworks by Pablo Picasso, Fairfield Porter, and Man Ray, among others.

Although Hallock has periodically left Southampton over the years—going to prep school and college, living for a time in New York City—he has always been lured back to his native turf, with summer weekend stints eventually evolving into permanent residency. “I’m a local,” he says. “And it’s hard to forget that.”

A version of this article appeared in the June 2013 issue of HC&G (Hamptons Cottages & Gardens) with the headline: Peter's Palace