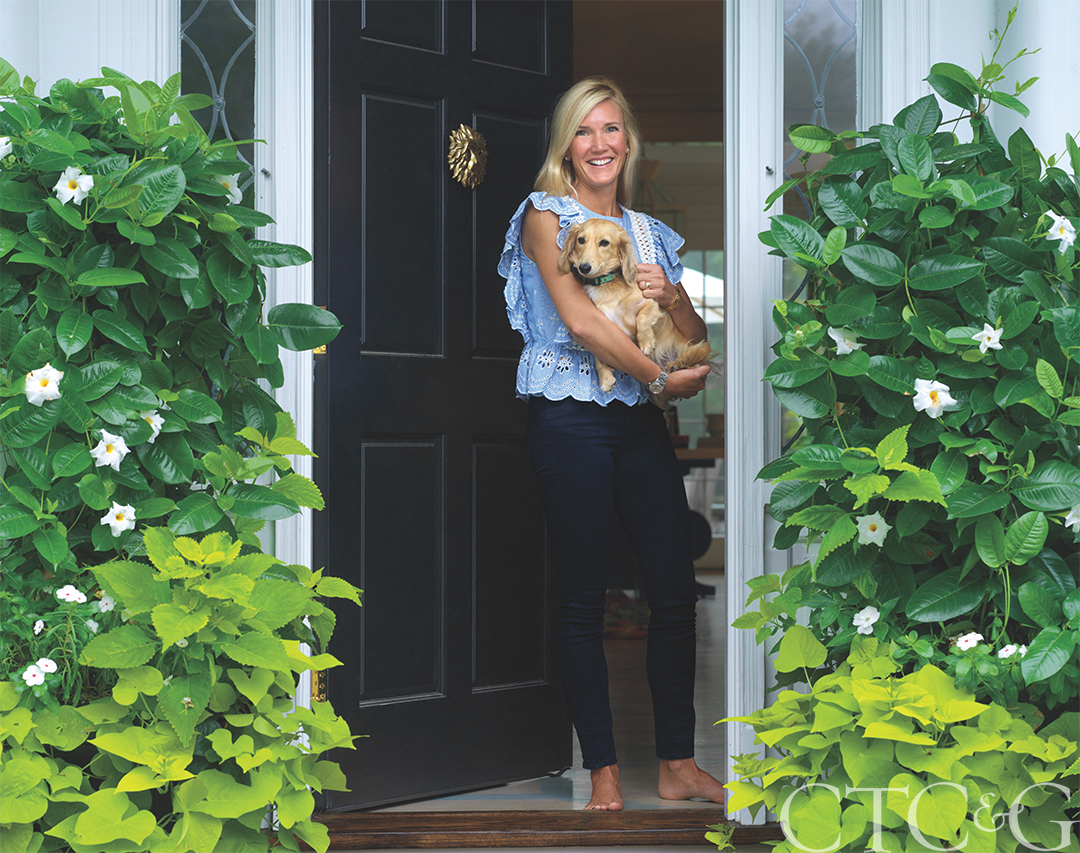 Appearances can be deceiving. Take this 1950s five-bedroom home in Fairfield County. What appears to be a classic center-hall Colonial on the outside, all white clapboard and black trim, is anything but classic inside. “The house is all about color,” says designer Lynn Morgan. “My client wanted to give it a big wow, and she wasn’t afraid to take the bold steps to get there.”

The owners, a couple with four children, lived here for several years before tackling a complete renovation. “It was a plenty big enough house,” says Elisabeth Baird. “But there was no flow.” Enter Steve Lecher, the principal of Lecher Development. “They had a beautiful piece of property, a great location, and a house that didn’t suit their needs,” says the builder. He reconfigured the downstairs rooms, including the front entry, which now runs from the front of the house to the back. And he expanded the kitchen to create space for a mudroom, turned a former storage closet and half-bath into a pool changing area, and raised the roof to make space for a playroom on the third floor. This not only improved the flow, it gave new purpose to old rooms, such as a grand salon with vaulted ceilings, formerly called the ballroom, that is now the living room. 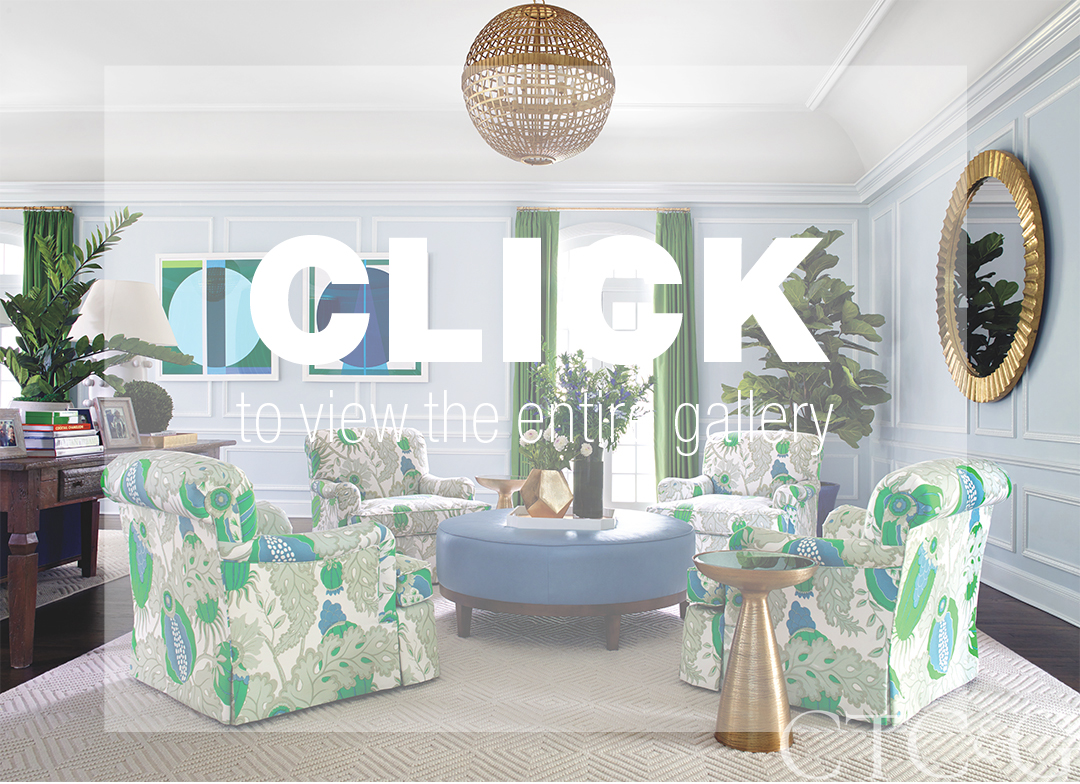 With the layout better suited for the needs of a young family, the owners turned to Morgan to carry out their design vision. “I wanted it to be a crisp house but full of color,” says Baird. “A happy, fun house.”

“She had definite goals,” notes Morgan. “Basically, we didn’t deviate from that. Elisabeth loves blues and greens. Hot pinks and oranges got thrown away.”

Under the designer’s deft hand, the palette throughout is vibrant and playful without being overpowering. “It’s festive and young, but nothing is too modern,” says Morgan. “She wanted to create rooms that would be used.” To that end, furnishings are covered in durable kid-friendly fabrics, and dark wood floors sport sisal area rugs.

In the front half of the statement-making entry, an exuberant Christopher Farr wallpaper in blue and green florals marries perfectly with the painted whitewashed floors. “The sunlight streams in, and the light floor makes that wallpaper really pop,” says Morgan. A blue framed mirror, round Oomph table and green velvet couch add a sophisticated but youthful punch.

In the dining room, emerald green lacquered walls amp up the wow factor. The original fireplace surround was replaced with blue-and-white ceramic tiles, and a custom whitewashed Swedish-style dining table was built to accommodate 10 people. Custom chairs are covered in a green-and-white fabric whose palm motif echoes the leaf shape of the brass wall sconces. “There’s a young, fresh vibe to the whole scenario,” adds the designer.

The kitchen’s white-and-blue palette is crisp and clean—a deep farmhouse sink is tucked between chic cobalt cabinetry—while the sunroom has a Palm Beach feel with its turquoise lacquered built-ins, high-gloss white shiplap walls, and chic rattan chairs. Modern 16-foot trifold doors open to the outdoors, while a mirrored bar adds a touch of glam. “That room is all about fun,” notes Morgan.

And speaking of fun, the sitting room off the former ballroom features a graphic blue-and-white China Seas wallcovering and a window seat covered in a Schumacher floral; overhead, the ceiling sports a coat of yellow paint. And not just any yellow. “It’s the brightest yellow you will ever see,” notes Morgan. “The whole space is a burst of color and pattern.” The mood quiets significantly in the upstairs master bedroom, with its pale lavender walls, and white custom four-poster bed. “It’s dreamy and airy, a soothing sanctuary, a place to get away from the kids,” says Morgan. “Everything about this house is very casual. It’s really for a young family that knows how they want to live.”

A version of this article appeared in the January 2019 issue of CTC&G (Connecticut Cottages & Gardens) with the headline: Dramatic Impact.

This article appears in the January 2019 issue of CTC&G (Connecticut Cottages & Gardens).