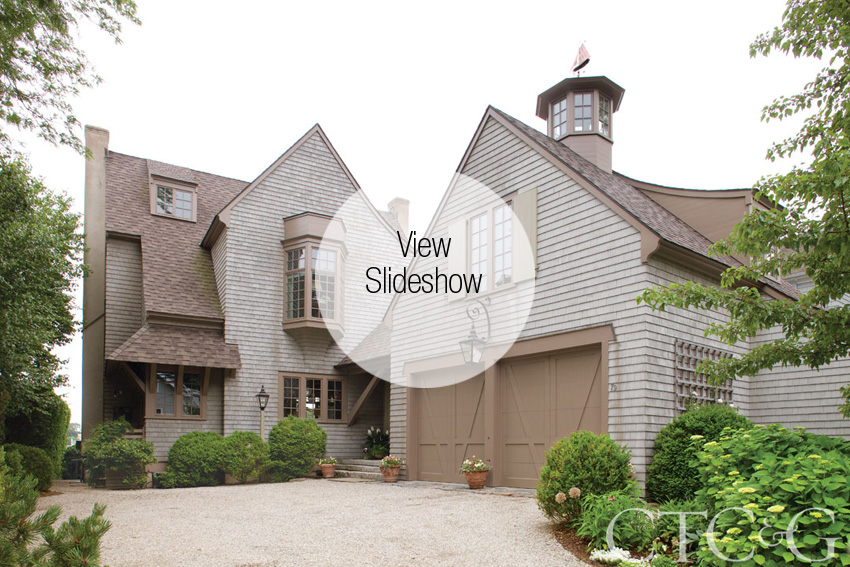 "They are the masters: I have never known architects so creative and imaginative. They just get it right away,” says Susan Hurwitt of the architecture firm McAlpine. And she should know: She’s worked with them on four projects over the past 25 years. Hurwitt first came across the firm’s work when she relocated from Connecticut to South Carolina. “I ran across an article about Bobby McAlpine’s house, and everything he said made sense to me. He works from a cocktail napkin! I called him and asked him to do a house for me.”

Years later, with Hurwitt and her husband back in Connecticut, this time Rowayton, she called upon the architects once again. “Susan is a serial builder and is a lot of fun to work with,” says Alabama native Greg Tankersley. The couple purchased a teardown on a small cove and wanted a house as close to the water as permitted. The land, tiny and pie shaped, was a challenge from the get-go, warranting a quirky footprint. “The main house is square to the road and the garage splays out—almost like it was added on,” says Tankersley. “It has a very charming, rural feel to it.” The front door is tucked away, and visitors almost have to stumble upon it to find it. “The most charming people you meet are the people you have to work to get to know,” he continues. “All their goods aren’t given up front. We feel the same way about houses.”

A quirky roofline means the house isn’t all about the entrance and lends a friendly, almost haphazard quality. Parts of the structure appear to be tacked on. It’s this intentional romantic nature of the home that makes it so approachable. “I came into this project with no pretense—we were building in a fishing village,” notes Tankersley. “I built what the town needed and not what someone from New York City would need.” Hurwitt adds, “Every Connecticut house looks just like every other Connecticut house. I knew they would give me something individual.”

Inside, the architects stuck to simple craftsmen details, distressed floors and buttery rough plaster walls with a slight tint of olive. “We didn’t get into any high Victorian. It looks like it was built by a carpenter—with the hint of a shipwreck to it. You walk in, look around and say: This would be really nice if you fixed it up,” says Tankersley. The interiors, a collaboration between Hurwitt and Cindy Smith of Circa Interiors in Charlotte, North Carolina, lend a soft polish to the structure’s more rustic edges. In the great room, earthy colors do not distract from the view outside, and raw silk curtain panels hung along one wall soften all the hard angles. The ceiling beams are new pine that Hurwitt’s decorative painter, Lawrence Oliver, spent hours on to achieve a perfectly aged look. Fireplaces anchor both ends of the room—a formal gesture made humble by the deliberate choice to make them quite different in proportion. “For every grand gesture, we did something else with quirkiness and humility in it,” says Tankersley.

The kitchen has a more finished feel. “Susan loves to entertain. She wanted a great kitchen but not a large one, so we dressed it up a little bit,” explains Tankersley. The wood-paneled ceiling is more delicately detailed compared to the ravaged timber of the great room. The refrigerator is upholstered in leather with nailhead trim.

“They get attention to detail like nobody else, and they don’t do cookie-cutter houses,” says Hurwitt. “This house, and every house that McAlpine does, has individual distinctive soul. And that speaks volumes about their work.”

A version of this article appeared in the March 2016 issue of CTC&G (Connecticut Cottages & Gardens) with the headline: New Home, Old Soul.