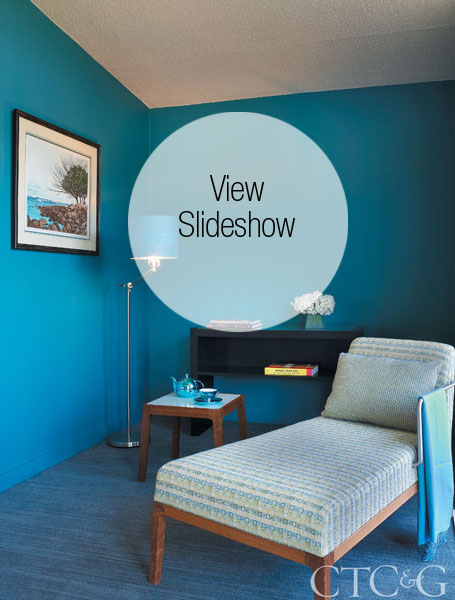 As someone who designs show houses for a living, Samantha Nestor is used to decorating entire houses at warp speed. So when the time was right to remodel her 1959 ranch in Weston, the cofounder of Chrysanthemum Partners tackled it with similar alacrity. “I wanted to get it done in three months,” says Samantha, who resided in the house with her husband, Michael, a management consultant, and their four-year-old son, Finn, for a year “to observe the light” before putting the pedal to the metal.  “But I didn’t want it to look like a show house; I wanted a unique, not typical, Connecticut home,” she says. “And we needed to do it on a budget.”

To that end, Nestor asked interior designer Christopher Coleman to help her unearth what she considered the home’s Palm Springs essence. Known for his color-saturated modern style, Coleman believes that everyone deserves good design regardless of monetary constraints. “I saw this as an opportunity to do something I don’t get to do very often,” says the designer (who counts Kate Betts, former editor of Harper’s Bazaar, and Don Logan, one-time chair of Time, Inc., as clients): “Make magic with paint.”

At the core of the remodel is an exuberant palette that seems to encompass  every combination on the primary color wheel and then some. Inspired in part by the home’s proximity to a golf course and its wooded surroundings, Coleman kick-started the project by painting the entry a vibrant shade of pear. Next, he chose a spicy turmeric to warm the living room walls, where the long, rectangular room presented a furniture placement challenge. “It’s a hard room because whatever you put in there has to float between the  fireplace on one side and the French doors that lead out to the deck on  the other,” says the designer, who selected a modular sofa that allows for enjoyment of both vantage points.

In the adjacent dining room, the original dark walnut, wall-mounted server  and paneling were refreshed with the same shade as the living room walls, and further lightened with a metallic finish. At the room’s center, a heavily distressed solid oak table is surrounded by eight plastic caramel-colored chairs. “When the sun shines through them, they just glow,” says Coleman.

The painted stripes in the home office are a compendium of the pigments seen throughout the house. Largely Michael’s domain, he claims the assemblage  of hues is inspiring. “The room is very refreshing, and after a particularly long day, the colors help energize you,” he says.

At the opposite end of the spectrum, the master bedroom is swathed in a serene ocean blue. And the room’s eclectic blend of flea-market bedside tables, a Crate & Barrel bed, a refurbished rosewood dresser, and mirrors framed with picture moldings are testimony to Coleman’s ability to create high style on a budget. “The mix of high and low is becoming more acceptable,” he notes.

In Finn’s room, a striped duvet influenced the inventive wall treatment. “We brought in twelve bundles of tape in different widths and created the striped pattern,” says Coleman, who kept the energy high with a yellow vinyl slipper chair and an eco-conscious rug fashioned from T-shirts.

According to the homeowners, their high key palette isn’t for everyone, but the bold color mix works because it is aligned with nature. “These colors aren’t contrived in these surroundings, and they change with the seasons,” says Samantha. “In winter, the house looks like a Colorado ski lodge, in autumn it feels mid-century modern, and in spring and summer, it’s pure Palm Springs.”

A version of this article appeared in the February 2012 issue of CTC&G (Connecticut Cottages & Gardens) with the headline: Paint Magic.