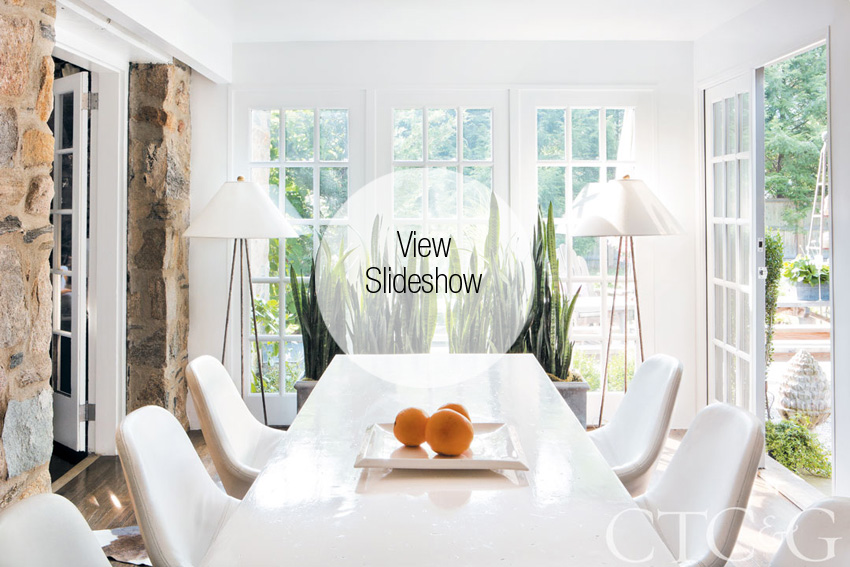 White isn’t for everyone, and it occasionally needs help transcending its rap as a cold color. To that end, interior designer Gretchen Mann has taken up the cause. “Anything is a standout on a pure white wall,” insists Mann, whose deft use of the timeless neutral has become her style signature. “There’s nothing like starting with a blank canvas because the truth is everything works well with white.”

Her own home on two acres in Lyme stands as testimony to that belief. From the Carrara marble kitchen counters to the sitting room sofas topped with faux leather (faux being mandatory for someone who shares her home with four poodles and a Chihuahua), it’s white that grounds the interior landscape and sets the tone for the entire house.

But before determining the best locale for her snow-colored English porcelain boxes, white-leather Barcelona chair, and a painted finial collection in varying shades of cream, Mann’s home required an overhaul. Purchased three years prior, the 1930s one-bedroom, one-bath stone cottage with its awkward 1970s kitchen addition had rooms plagued by dark-brown knotty pine ceilings and no easy connection between the spaces. “You either had to walk outside or go down these tiny narrow halls to reach the stone room from the kitchen,” says Mann, noting the previous owner, an artist, had also installed glass doors in the slanted ceilings to bring in more light.

Still, Mann saw possibilities for the property that her architect, Brooke Girty, described as “ramshackle, rundown and unloved.” “There were these funky modern dormers on the outside but a beamed ceiling space inside that Gretchen wanted to save,” says Girty, who promptly removed the unsightly protrusions and added a small porch to give the incongruous horizontal extension a better sense of scale.

Responding to the need for more square footage, Girty designed a second more sympathetic structure to house bedrooms and bathrooms that mimicked the roofline and window shapes of the original cottage. “I tried to stay with the traditional roof form to tie everything together,” says the architect.

To create continuity inside, Mann whitewashed all the ceilings and woodwork, deviating slightly from the bright white theme in the original living room, where the warm gray mohair sofas match the surrounding stone. “It’s where we live in the winter, so I wanted things cozier,” she says. In the new dining room, eight white leather chairs surround an 11-foot custom table fashioned from white planking and topped with shiny marine paint. “The room is so narrow, we had to go custom,” she adds.

Softening the overall canvas are measured color injections: warm-toned pumpkin in the living room and eye-popping fuchsia in the family room. There’s also an assemblage of unabashedly humorous accessories led by an imposing moose-head trophy above the fireplace. “I bought the moose and several others from an old man in Greenwich,” says Mann about the animal heads that peer down from various points in the living room. “It’s things like texture in the fabrics, colorful accessories, my gold-framed paintings, and those deer heads that carry the white.”

In the landscape, the greenery creates a neutral backdrop for an ever-changing mixture of pots and pillows. “I didn’t want the demands of gardens, so I went with low-maintenance gravel terraces and boxwoods,” says Mann, who uses annuals and accessories to infuse her patio with color, and even changes the towels for her outdoor shower to match the flowers and her whims. “Some years I fill the pots with pink flowers, other years it’s white or yellow. I keep a storage closet filled with pillows to change things up both inside and out.”

A version of this article appeared in the February 2013 issue of CTC&G (Connecticut Cottages & Gardens) with the headline: The Great Uniter.