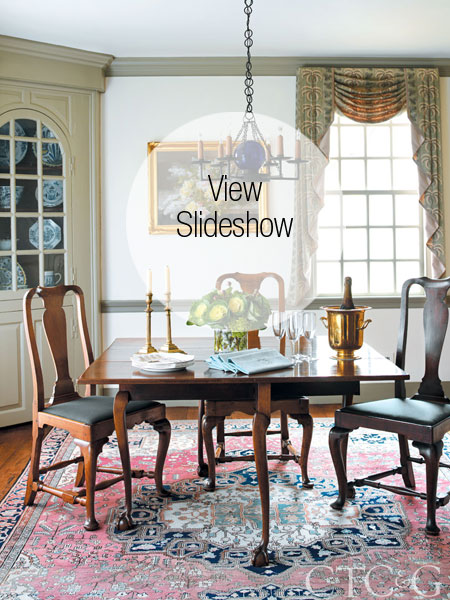 There are those that collect antiques and then there are those that build their own. Most people fall into the former category, but Barbara and Robert Sallick are proud members of both camps. The Sallicks, cofounders of the venerable bath company Waterworks, live in an 18th-century house, replete with 18th-century details, that just so happened to be built in 1968. “The fact is we really wanted to buy an 18th-century house. It was our dream and we looked at house after house after house until my father finally said, ‘Why don’t you build it?’” explains Barbara. “He had no idea at the time we were completely insane.” Whether from insanity or pure passion, the Sallicks studied historical houses, in particular the Webb House and Silas Deane House in Wethersfield, CT, and decided they would build a house just like them. At the Library of Congress, they found a plan that resembled the houses that they admired, found an architect and thus began their journey in re-creating a little bit of history in Danbury.

The house need not just resemble an antique on the outside. No, the Sallicks wanted it to be accurate both in and out—down to the tiniest details. “We followed trails all over Connecticut and started buying salvage. We bought all 18th-century doors, floors, paneling, nails, by the coffee can—my husband straightened thousands of old nails—and began assembling everything in the garage of the house we lived in at the time,” says Barbara. “We were the original eco-friendly pioneers.” The house was lovingly—and intelligently—put together with every detail, from the floorboards to the windows, from the 18th century. “This house was not slapped together,” says Barbara. “In 1968 it was just the beginning of cheap building, and we were using extraordinary craftsmen who loved working on this house.” Of course, the 1700s surface does conceal modern-day conveniences such as electrical wiring, central heat and air, and there is a laundry room. “We adapted the Webb House to fit a modern-day family, and it has been just perfect for us.”

The Sallicks filled the house with artifacts they found all over New England. “We were very much committed to creating an updated version of an 18th-century house. From the beginning of our marriage, we had been buying 18th-century furnishings,” says Barbara. The meticulous thought behind the furniture collection is obvious. The grand simplicity of each piece—for example, the six mismatched Queen Anne dining chairs found in Connecticut and Massachusetts—has a sculptural quality. In the living room, an oriental rug and pieces upholstered in a reproduction red wool moreen add color, while providing a clean backdrop for a Delft collection and the room’s remarkable floors: wide oak floorboards salvaged from a house in Danbury. There are collections within a collection at every turn, and yet the house exudes a warmth and comfort that often doesn’t come with those with a storied past. “It doesn’t feel modern—nor should it—but it doesn’t feel old- fashioned either. There’s a nod to the 18th century in everything, but it feels fresher than what you might see in a period room. It’s lighter and a little more open,” notes Barbara. “No one comes here and thinks they are in a historic home.”

In the 44 years the Sallicks have lived in their house, they’ve only made one change: an extension to the family room that they call “the Annex” to accommodate a growing number of visiting grandchildren. A Dunbar sofa and McCobb credenza add a more modern feel to the addition, while an 18th-century Windsor chair, with its original paint and clean, simple color scheme, keeps it grounded in the Sallicks’ version of the 18th century. “Of course, everyone still wants to crowd into the original family room,” says Barbara. “It’s wonderful, really. This house worked for a family of four, works for the two of us, and now works for grandchildren. I just never get tired of it.”

A version of this article appeared in the March 2013 issue of CTC&G (Connecticut Cottages & Gardens) with the headline: Time Traveler.